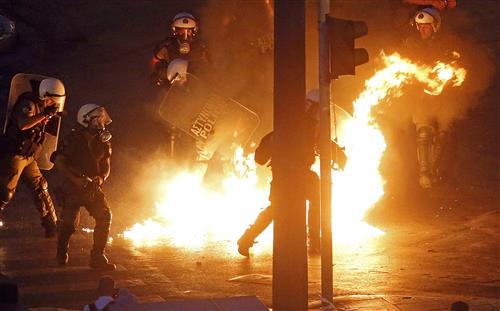 By a vote of 224-64, the Greek parliament today passed a sweeping austerity package demanded by Greece’s European creditors for a new $94 billion bailout package, including significant pension adjustments, increase to value added tax, an overhaul of the country's collective bargaining system, measure to liberalize its economy, and tight limits to public spending. Greece will now remain in the Eurozone and avoids bankruptcy.

Earlier, thousands took to the streets of Athens in a series of peaceful marches to protest against the bailout deal that saves Greece from bankruptcy but will impose more austerity measures on a country already deep in crisis.  Radical protesters engaged the police in clashes, and police used tear gas to restore calm in central Syntagma Square, the scene of main protests.