Zarif and Salehi return to Iran aboard IRIG Airbus A321 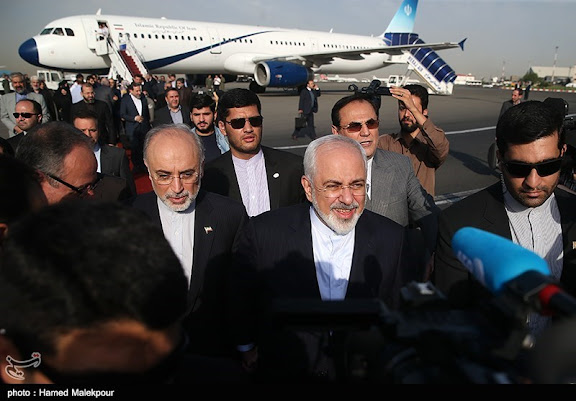 The aircraft departed Vienna the preceding day, scheduled to fly straight to THR, however the diplomatic team and accompanying press members appear to have flown on to Mashhad for pilgrimage to the holy shrine of Imam Reza. In the morning, the aircraft brought them to THR.

Aircraft is IRIG Airbus A321-231, reg. EP-AGB (cn 1202). It is a 15.3 year old aircraft that Iran's government obtained in 2005. This same aircraft last week transported President Rouhani to the BRICS, SCO, EEU Summit at Ufa, Russia.

The recently signed Iran nuclear agreement provides American civil aircraft manufacturers the ability to sell aircraft to Iranian passenger airlines. Specifically, it is hoped Boeing will be able to take advantage of this agreement, making profitable sales of 747-8 and 787 aircraft and in so doing providing jobs to American workers.
Posted by Mark Pyruz at 2:33 AM

Foreign Minister Zarif and the negotiating team went straight to Mashhad for pilgrimage at the shrine of Imam Reza, the Shia Imam buried in that city.

Yes, perhaps my description isn't clear. The aircraft had been scheduled (and I assume filed flight pans) to fly VIE to THR, but instead flew VIE to MHD.