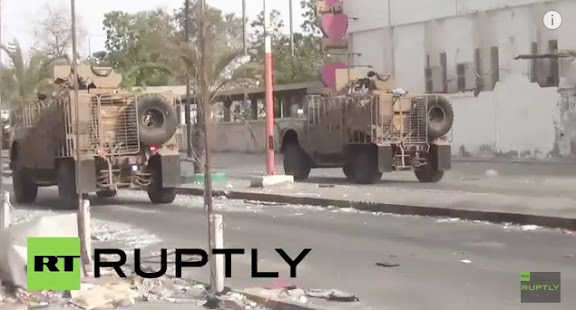 According to Agence France-Presse, dated 20JUL15:


ADEN: Yemeni pro-government forces on Sunday sought to tighten their control of Aden as Houthi rebels mounted resistance in some districts, two days after the regime declared the city “liberated.”

On Sunday, fighters from the pro-Hadi Popular Resistance advanced towards the rebel-held district of Al Tawahi, a military source said.

Swathes of the southern city have been reduced to rubble by the four months of ferocious fighting.

Around 15 air strikes targeted rebel positions in Al Tawahi and on the northern outskirts of the city where rebels had brought reinforcements, military sources and witnesses said.

Fighting also went on in the district of Crater where some rebels remain holed up, according to pro-Hadi fighters.

A rebel spokesman dismissed the government’s claims on Saturday that it had seized control of Aden as “psychological warfare and an attempt to improve the crushed morale” of loyalist fighters.

On Sunday, a spokesman of the Houthis’ Ansarullah movement said the rebels had “regained the lead and repelled several attacks by the mercenaries.”

COMMENTARY: The long-planned Saudi/UAE led couter-offensive against the Sanaa government in Yemen has made gains, seizing upon the opportunity of a humanitarian truce that had been sought and broken.

The counter-offensive has rendered in pockets elements of Ansarullah forces deployed in the peninsula.

By 16JUL15 forces aligned with and encompassing the  Saudi/UAE led military effort had retaken large parts in the port area of Mualla near Aden and entered the commercial district of Crater.

On 17JUL15, Saudi/UAE sources and the government in exile said that they had "liberated Aden from the Houthis". Despite that, Ansarullah forces still controlled the eastern and northern entrances to the city, and pockets of fighting have been observed.

Forces aligned with and encompassing the Saudi/UAE led military effort continue to press on with the counter-offensive by reportedly capturing two military bases, one of them in the Lahij Province and the other in the eastern Shabwa province.

Saudi military and media sources on 19JUL15 reported civilian casualties resulted from "Houthi artillery fired from six miles away." This writer finds it implausible that Houthi light infantry and not the Yemeni Army would operate large caliber artillery, targeting from such a distance. Sanaa government sources counter that the casualties were the result of Saudi-led airstrikes and naval gunfire.

Whatever the case, the Saudi/UAE military effort against the Sanaa government has taken a more direct role in the ground fighting, while its air forces have used up air-to-ground munitions to such an extent that replenishment has been required from Britain, transferring Paveway IV precision guided bombs originally earmarked for the Royal Air Force to Saudi Arabia, to enable the Gulf state to build stocks of the weapon being used against targets in Yemen (and Syria).

Despite reports from Gulf-produced media, resistance to the counter-offensive against the Sanaa government appears to be continuing. Whether or not the Battle of Aden 2015 and Battle of Taiz render consolidated positions or drawn-out attrition warfare may well dictate the ultimate fortunes of the Saudi/UAE military intervention in Yemen. 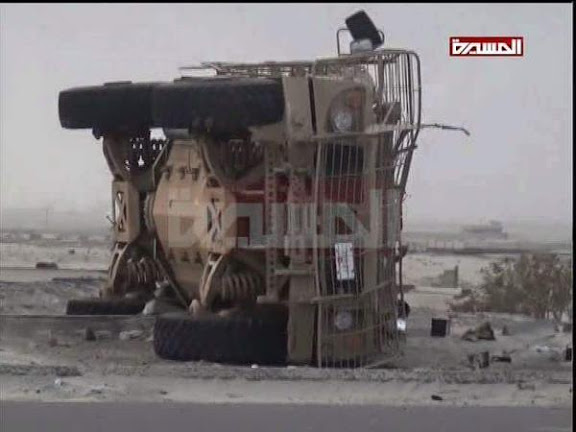 Knocked out UAE-supplied and likely operated Oshkosh M-ATV MRAP; imagery that received widespread coverage on media produced by the Sanaa government in Yemen. 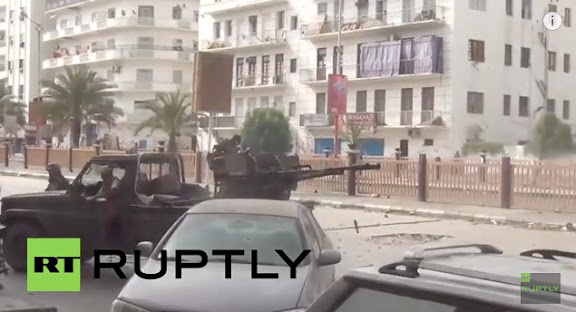 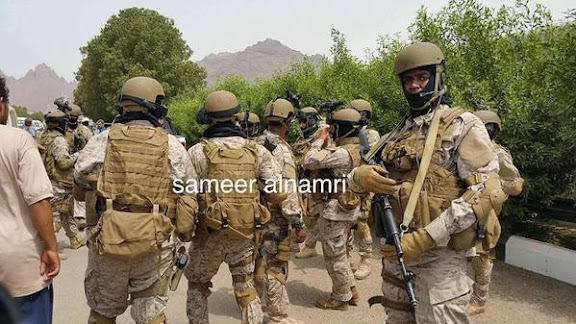 Aden is still contested. KSA/UAE-backed Yemeni government forces control many neighborhoods including Crater, Mualla and Khurmaksur as well as Aden International Airport. But even in the neighborhoods controlled by pro-Hadi forces, some Houthis resistance could still remain, as typical in urban warfare. The Houthis were putting up a strong defense in Tawahi, their last stronghold in the city, as pro-government forces were approaching the neighborhood, reportedly with greater success on Sunday night. The clearing operation in Aden will take more than few days, and Houthi forces are still capable to launch a counterattack, although as each days passes, their chances become less. A “liberated” Aden will be a great victory for the UAE and KSA forces, as well as a great boost for Hadi’s government to come out of exile and relocate the seat of government to Aden.

Aden is also just one front in the growing number of ground battles in the country, including in Lahj and Taiz as well as the Saudi border. This conflict has all the marking of becoming a protracted war. Pro-government forces will find it increasing difficulty moving north from Aden, as the Huthis will put up defenses to maintain their strongholds.

The surprise is the strong will by Saudi-UAE forces to fight and stop the Houthis from consolidating their gains to form a Shia-led national government. Without their interventions, Saudi-led airstrikes and now UAE-led ground operation, the Houthis, in alliance with deposed present Saleh, would have formed the government by now.

Or the other way of looking at it is that the saudis despite having total air supremacy,billions in military hardware and friendly forces on the ground have been completely unable/incapable of defeating the houthis and their rebellion and the best they can do is a stalemate in aden,not to mention that if the diplomatic communiques released by the cyber army/wikileaks are true then the saudis realise they are in a quagmire in yemen and are looking desperately for some way out of this situation,on both counts it looks pretty bad for the saudis and their "allies"

Interesting you say that. Since King Salman and the new national security team came to power in Riyadh in January, the Saudis have shown boldness and determination unseen in the past four decades under conservative monarchs. In Yemen, Saudi Arabia and UAE decided to stop the Houthis and directly challenge Iran by blockading the ports, forcing Iran to turn back an IRGC-Quds Force convoy delivering arms to the Houthis and even bombing Sanaa airport runway to stop an Iranian cargo plane suspected of carrying arms from landing. And now ground operations, backed by airstrikes, to slow the Houthi advance and now pushing tthem out of Aden, ending their plans to create a national government under their control, and giving Hadi a chance to move the seat of government from exile to Yemen. These are bold and successful moves, have no idea why you would think these are signs of weakness.

The Saudis and Emiratis will face tougher time moving north, but that does not take away from their recent impressive victories, handing Houthis their first major defeat in the 10-month conflict.

Obviously you and I have very,very different definitions of "impressive" and "bold and successful",if you have a coalition of several nations who on paper at least have one of the most powerful airforces in the region and who have total air supremacy and friendly forces on the ground fighting against a mainly militia force and yet after over a month you still have not been able to capture one city let alone a big chunk of the country and have started to run out of bombs then you are as pretty far from "impressive" as it is possible to get in my book,still when one considers the lack of success the israelis had against the iranian trained Hezbollah then its not so surprising that the saudis and their allies have done so poorly against the iranian advised and trained houthis.I also wouldnt consider what the saudis have done as determination as much as desperation in the wake of the chaos of the arab spring and the continuing rise of iranian power in the region,and the nuclear deal is just one more kick in the guts to the saudis,indeed the saudis are so desperate as to even deal with israel and the russians to try and stop iran

Let's talk about facts we can agree, not the abstract meaning of phrases like when is a country desperate.

Let's start with the Saudis preventing Iran from delivering arms and deploying large numbers of advisers and Shia militia to the theater, as it has done in Iraq and Syria. So far that has been an unqualified success for the Saudis, I am sure you agree. KSA/UAE airstrikes/ground operations in Aden also is their largest military intervention ever, which has so far resulted in blocking the Huthis to form a national government, no? That's a success for Saudi/UAE.

Does this conflict have the potential of going into a stalemate? Most probably yes. As probably are the conflicts in Iraq, pitting ISIL against the world, including Iranian, Iraqi and Kurdish forces and U.S. airstrikes. Or in Syria, where the Syrian army with all the support from the Hezbollah and the Iranians has been losing ground. These are tough fights, with people committed to a cause, as in Sunni extremists in Iraq and Syria and Shia extremists in Yemen. The region is not in a good shape.

Recall, Uskowi, that it was a U.S aircraft carrier with a U.S strike group that forced the last Iranian, 9 ship strong convoy back to the Persian Gulf after it was heading for Yemeni waters. That's when operation "Decisive storm" was officially over.

Again, something tells me that Iran not making a bold move on Yemen yet has something to do with the nuclear negotiations. Those are now over. Let's wait and see.

The blockade was being enforced by Saudi and Arab allied navies. A U.S. aircraft carrier group was present nearby to ensure Iranian compliance. But I agree, the nuclear deal had sucked all oxygen out of any other development regarding Iran, and now that's over we need to see how far Iran is willing to go to support the Houthis. Noting that Yemen has never been a major country of interest to Iran; it's not Iraq or Syria, and the Iranians could as easily walk off that conflict after doing a cost-benefit analysis. I personally believe that's a prudent policy re Yemen.

Yes, it was being enforced by Arab navies when no one was there to challenge it, and the only reason the U.S didn't intervene the second time Iran had tried to break through the blockade when it was shipping aid to Hudaida port was because it was obvious, due to the size and design of the approaching ship, that it was carrying humanitarian and not military supplies. Does this mean Saudi/Arab armies would never confront an Iranian cargo if it was determined to reach Yemen's territorial waters and ship arms? No, I'm not saying that.

You're right, of course, Iran never did have a major interest in Yemen, at least not as much as Syria, Iraq and Lebanon. However, abandoning its allies in Yemen would send a message to Iran's other allies that it may be ready to do the same elsewhere. If Iran had complied every time a U.N approved blockade was enforced by one of its rivals/enemies, it would have dismantled the Quds Force by now!

I must say, if Iran gives up on its Houthi allies today, it will encourage more "decisive storms" in the future elsewhere. Surly a post nuclear deal, economically empowered Iran will have no reason to do that.

Yemen may not become an Iranian satellite state like some countries in the region, but Iran would probably think twice before allowing it to become an enemy state.