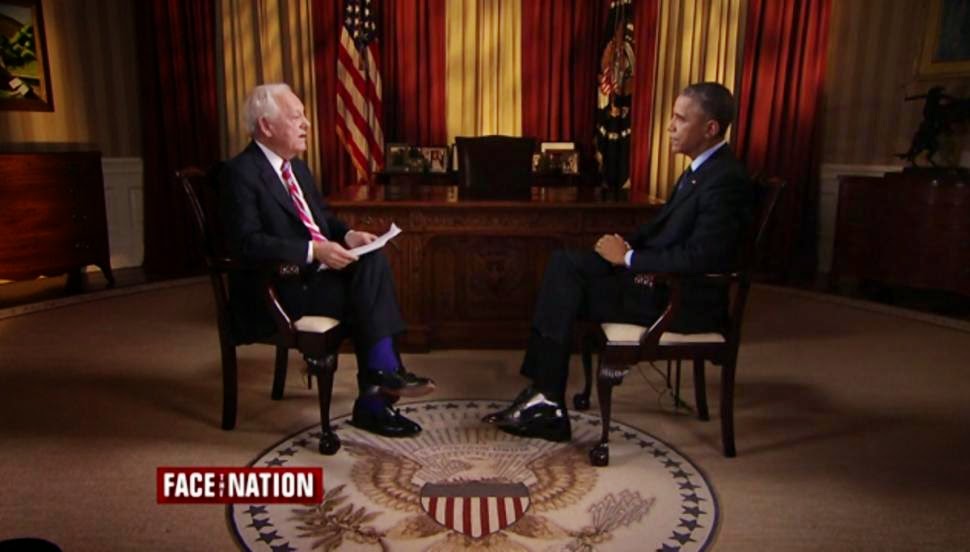 President Obama today spoke to Bob Schieffer on CBS ‘Face the Nation.’ Below are excerpts of Obama’s comments related to Iran and the region.

It is a sad fact that these talks will collapse as Zionist pressure and mullah obfuscation both ruined any chances and now with Republican control of Senate and Presidential elections looming in 2016, a totally lame duck Obama will not risk it. Perhaps, a McCain focus on regime change in Tehran may be the next opportunity after the next Republican President in 2017, if the regional abyss does not move into Iran's borders.

We express outrage over the use of "barrel bombs" but is it any worse than napalm? which we reserve a disclaimer for any future, additional use.Actually napalm is considered a more effective anti-presonnel weapon.

As to Assad legitimacy, he did win recent presidential election, and his conventional military remains predominantly Sunni, while the NDF and militias are predominantly made up of the minorities. If we were to use Syrian Arab Republic and allied militia forces as our ground partners in the war against ISIL and al-Qaeda affiliates, while insisting the opposition sit down and negotiate with the Syrian Arab Republic establishment, the war would likely be won in roughly 90 days.

Assad, as his father did, presides over a dictatorship and a police state. your talk about legitimacy because of some recent sham election is pure unadulterated slurry ...and quite noisome.

Well according to US and Lebanese media reports US through "anonymous" channels has sent a message to Assad that they are not interested in regime change. As you correctly said the Assad did win the election and 80% of the Syrian Arab Army that is fighting with uncanny cohesion and determination is Sunni. The Takfiri brand of senseless savagery has been rejected by all sane people in the region. BTW, 5 Syrian nuclear engineers were gunned down today, you take a wild guess at who is behind that atrocity?

The talks are still well under way; stop being such a pessimist!

I highly doubt McCain will become president. That position will most likely go to Hillary. Moreover, Iran rarely bows down to pressure. McCain in office would be lie the Bush administration.

Right, the concept of war in itself is a nasty one to begin with. Militaries does not concern themselves with how much or how little humane a particular weapon or munition is to the enemy. You make use of as effective weapons as possible to vanquish the enemy on the battlefield. However it's always haram when weapons of any kind, no matter how light, is used against civilians on purpose. For tactical close-in air support, Napalm or certain types of cluster bombs have the most devestating effect on infantry and light armored vehicles. Iron bombs are more suitable for hard targets, like buildings. As far as i know, we never used Napalm in the 1980 Iran-Iraq War, we didn't have it. The Iranians on the other hand had Napalm which they used, especially early in the war. We had chemical munitions instead which we used for the first time in 1983.

And I am asking myself whether these words can be unterpreted that we may not get to Iran, and change its system soon.