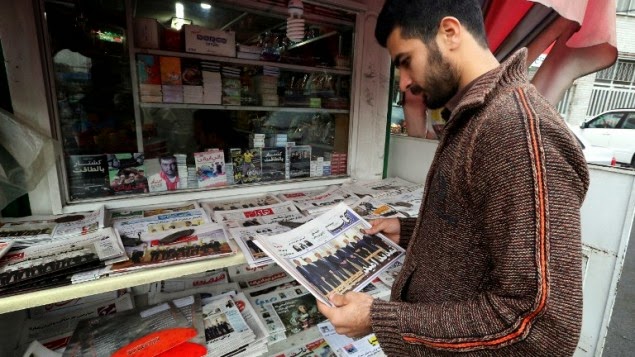 The failure to reach a final agreement with world powers in Vienna dominated the front pages of Iranian newspapers today, with most editorials viewing further dialogue with the West as pointless. Hardliners denounced inability of the negotiating team, and by extension Rouhani’s government, over the missed deadline and generally opposed the seven-month extension of talks.

“Nothing!” Said the front page of hardline paper Vatan-e Emrooz. It characterized the seven-month extension time as a ruse to “cover up that negotiations in fact failed.” The paper also blamed U.S. for its “excessive demands” and the failure of the talks.

Iran’s Supreme Leader Ayatollah Khamenei said today Iran would not sink “to its knees” on the nuclear issue, despite efforts of “arrogants” (U.S. and Western allies) to make it do so. Khamenei made the comments, his first since the failure of Vienna talks, during a speech in Tehran.

President Hassan Rouhani was much more optimistic, telling the nation in a televised speech on Monday night that despite the setback, a deal could still be done.

Reformist newspapers were also generally optimistic. Shargh, the leading reformist paper, characterized the extension of the talks in a huge deadline on its front page as, “Extension of Hope.” It said serious negotiations with the U.S. and the West was a “victory of realism, rationality and pragmatism.”

Meantime, Saeed Leylaz, one of Iran’s top economists, defended the extension agreement, saying as part of its sanctions relief Iran will be able to draw $700 million a months from its blocked funds. He added that would be equivalent of an increase of oil exports by 300,000 barrels a day. (AFP, 25 November)