Obama’s Letter to Khamenei on ISIL

And Obama’s Comments on Nuclear Talks 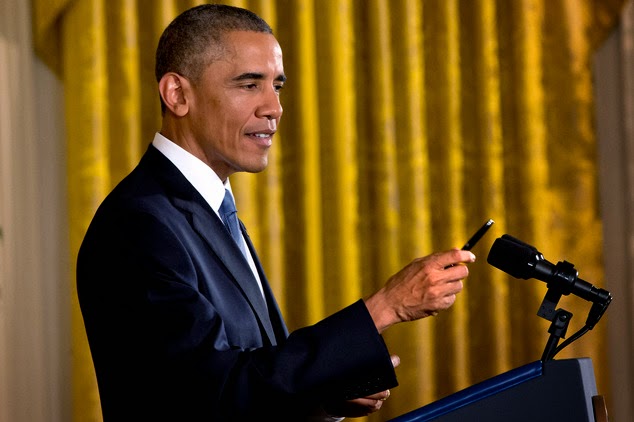 President Barack Obama wrote a letter to Ayatollah Ali Khamenei last month, laying out a shared interest in fighting the Islamic State, The Wall Street Journal reported today. Obama used the letter to win support for U.S.-led strikes against ISIL, and to push for a deal over Iran’s nuclear program ahead of the 24 November deadline.
White House spokesperson Josh Ernest said at a news conference on Thursday that he could not confirm the letter.

Meanwhile, in his Wednesday’s press conference on the Republican electoral victories, Obama was asked to explain the state of nuclear negotiations days before the deadline. Following are the Q&A segment dealing with Iran.


QUESTION: Another deadline coming up is on your negotiators by November 24th. I’m interested what your current perspective is on how those negotiations are going. Also, if it is your feeling that you have the power to implement any type of agreement that’s reached without any action from Congress?


OBAMA: On Iran, because of the unprecedented sanctions that we put in place that really did have a crippling effect on Iran’s economy, they’ve come to the table and they’ve negotiated seriously around providing assurances that they're not developing a nuclear weapon for the first time.  And they have abided by the interim rules.  We have been able to freeze their program, in some cases reduce the stockpile of nuclear material that they already had in hand.  And the discussions, the negotiations have been constructive.


The international community has been unified and cohesive.  There haven’t been a lot of cracks in our alliance.  Even countries where we have some differences, like Russia, have agreed with us and have worked with us cooperatively in trying to find ways to make sure that we can verify and have confidence going forward that Iran doesn't have the capacity to develop a nuclear weapon that could not only threaten friends of ours like Israel, trigger a nuclear arms race in the region, but could over the long term, potentially threaten us.


Whether we can actually get a deal done, we’re going to have to find out over the next three to four weeks.  We have presented to them a framework that would allow them to meet their peaceful energy needs.  And if, in fact, what their leadership says, that they don’t want to develop a nuclear a weapon -- if that is, in fact, true, then they’ve got an avenue here to provide that assurance to the world community, and in a progressive, step-by-step, verifiable way, allow them to get out from under sanctions so that they can reenter as full-fledged members of the international community.


But they have their own politics, and there’s a long tradition of mistrust between the two countries.  And there’s a sizeable portion of the political elite that cut its teeth on anti-Americanism and still finds it convenient to blame America for every ill that there is.  And whether they can manage to say yes to what clearly would be better for Iran, better for the region, and better for the world, is an open question.  We’ll find out over the next several weeks.


QUESTION: Sir, on whether or not you have the power unilaterally to relax sanctions to implement an agreement?


OBAMA:  There are a series of different sanctions.  There are multilateral sanctions; there are U.N. sanctions;  there are sanctions that have been imposed by us, this administration, unilaterally.  And I think it’s different for each of those areas.


But I don’t want to put the cart before the horse.  What I want to do is see if we, in fact, have a deal.  If we do have a deal that I have confidence will prevent Iran from getting a nuclear weapon, and that we can convince the world and the public will prevent Iran from getting a nuclear weapon, then it will be time to engage in Congress.  And I think that we’ll be able to make a strong argument to Congress that this is the best way for us to avoid a nuclear Iran; that it will be more effective than any other alternatives we might take, including military action.


But that requires it being a good deal.  And I’ve said consistently that I’d rather have no deal than a bad deal -- because what we don’t want to do is lift sanctions and provide Iran legitimacy but not have the verifiable mechanisms to make sure that they don’t break out and produce a nuclear weapon.


and perhaps there will be a deal coming soon.

perhaps there will not because Iranians will not accept having extensive inspections of nuclear development sites...and other sites where some suspect secret nuclear weapons development work is taking place..... some Iranians will find it intrusive and demeaning that the other parties to a deal won't simply accept Iran's word.

Well done Obama. Sanctions are always at hand, and they do what they're supposed to do. The US in no hurry so don't let the Iranian regime off easily...let's see if Iranian regime has wised up...

I'm sick of those pathetic Iranians who are so happy about the sanctions against their own country and would like to witness the downfall of the regime at any (and I mean any) cost!

The sanctions are killing the people you wankers! How many other Iranians do you wanna see die from cancer, lack of medicine, or spend their lives working double time just to make it to the next day, before you realize that this is a war on Iran, not just the regime, and that any regime that will fully exploit energy alternatives, especially nuclear, will face the very same sanctions you're so childishly happy about?

AnonymousNovember 6, 2014 at 10:14 PM
This is probably the last chance the west has for any deal good or bad,the west squandered its last opportunity to reach a deal with iran under bush and even if there is one now can obama deliver on his obligations or will it be a repeat of the "deals" we saw with the dprk and libya ie torn up at the first opportunity,and obama cannot even gaurentee that he can lift all the sanctions

sure a "Help me" letter, means they are not getting easy

people aren't happy about the sanctions and realize that those sanctions were brought down upon the heads of the Iranian people by the bitter old men running the Iranian government.

AnonymousNovember 7, 2014 at 3:26 PM
No they were brought about by the us because iran insisted on standing up for its sovereign rights,iran didnt sanction itself

Piruz MollazadehNovember 6, 2014 at 11:46 PM
Well said,sadly there are malcontents in every society who long to see the destruction of that society or system of government in that society and that if only this could be achieved everything would be so much better,but the one thing to remember is that they and their views are in the minority