U.S. escalation against ISIL, and the Iran response

This week's snippets from the media proceeded by commentary: 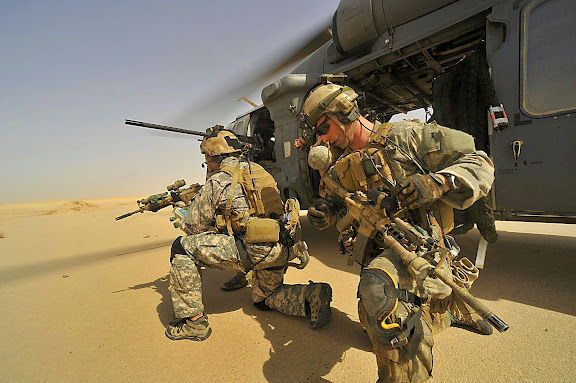 
American military force escalation against ISIL in Iraq
According to BBC, dated 07NOV14:


The US is to send 1,500 more non-combat troops to Iraq to boost Iraqi forces fighting Islamic State (IS) militants, the White House says.

The Pentagon said the troops would train and assist Iraqi forces.

COMMENTARY: This announcement was expected, following soon after the U.S. midterm elections. POTUS will be involving Republican-led United States Congress in the escalation of the war in the Middle East. For an informed discussion of such, see HERE.


Iraqi security forces, backed by American-led air power and hundreds of advisers, are planning to mount a major spring offensive against Islamic State fighters who have poured into the country from Syria, a campaign that is likely to face an array of logistical and political challenges.

The goal is to break the Islamic State’s occupation in northern and western Iraq, and establish the Iraqi government’s control over Mosul and other population centers, as well as the country’s major roads and its border with Syria by the end of 2015, according to American officials.

The basic strategy calls for attacking fighters from the Islamic State, also known as ISIS or ISIL, with a goal of isolating them in major strongholds like Mosul.

That could enable Iraqi troops, Kurdish pesh merga units and fighters that have been recruited from Sunni tribes to take on a weakened foe that has been cut off from its supply lines and reinforcements in Syria, which are subject to American airstrikes.

Iraq’s Shiite militias, some of which have been supported by Iran, pose another obstacle. Antony J. Blinken, President Obama’s deputy national security adviser, said last week that it was important that the Shiite militias be withdrawn, disband or have their members integrated into Iraq’s security forces.

But Fuad Masum, the Iraqi president, has suggested that the militias could be needed until the Islamic State was thoroughly defeated.

A major challenge will be synchronizing the Iraqi campaign with the American effort to train the beleaguered moderate Syrian opposition. The Pentagon’s program to train 5,000 Syrian rebel fighters a year in Saudi Arabia and Turkey has yet to get underway, which raises the possibility that Islamic State fighters could be pushed back into Syria well before there is a trained and equipped Syrian rebel force to oppose them.

COMMENTARY: What to do with the Shia militias and Iranian influence in Iraq? The Shia militias see the upcoming force empowerment of the Sunni tribes as U.S. led favoritism towards the opposing end of the sectarian divide. Telling, are the following reecent remarks made by AAH Depurty Commander Tabatabai, as reported by ABNA on 01NOV14:


“We proclaim that we will not accept the presence of any American forces on Iraqi soil, apart from the permanent staff at the U.S. embassy. Our weapons are not only for ISIL or Takfiris, but Americans occupation forces will also be targeted.”

COMMENTARY: Whether or not this is posturing by AAH on behalf of the IRGC-QF cannot be determined from this vantage point. But it is clearly evident elements of the Iran-led coalition in Iraq against ISIL are making noise in seeking attention, leading up to the long build-up preceding this spring's U.S.-led Iraqi offensive.


POTUS letter to SL/ IRIG
According to the Wall Street Journal, dated 06NOV14:


President Barack Obama secretly wrote to Iran’s Supreme Leader Ayatollah Ali Khamenei in the middle of last month and described a shared interest in fighting Islamic State militants in Iraq and Syria, according to people briefed on the correspondence.

The letter appeared aimed both at buttressing the campaign against Islamic State and nudging Iran’s religious leader closer to a nuclear deal.

Mr. Obama stressed to Mr. Khamenei that any cooperation on Islamic State was largely contingent on Iran reaching a comprehensive agreement with global powers on the future of Tehran’s nuclear program by a Nov. 24 diplomatic deadline, the same people say.

COMMENTARY: Last August the Iranian Foreign Ministry made public a general offer of linkage between American concessions being made in the nuclear negotiations (such as removal of all sanctions), and Iran's assistance with the U.S.-led war against ISIL.

Perhaps the POTUS letter to SL/IRIG was a form of response to the FM/IRIG public remarks on the subject. Whatever the case, it is the opinion of this writer that it is in the interests of both Iran and the U.S. to cooperate, in waging war against ISIL and al-Qaeda affiliates. Parallel, uncoordinated efforts-- or worse, conflict between allied elements of the two-- represent potential complications to be avoided in pursuing a swift and effective conclusion to war against ISIL.


The Syrian regime of President Bashar al-Assad feared the rise of Republicans in the U.S. Congress and began preparing for a potential radical shift in U.S. foreign policy towards Syria, statements by the country’s foreign minister revealed on Thursday.

Damascus was afraid that the rise of Republicans could mount pressure on President Barack Obama to launch military strikes against the regime army’s installations in Syria and has asked Russia to speed up the delivery of a powerful air defense system, Foreign Minister Walid Muallem said in an interview with Lebanon’s al-Akhbar newspaper.

Washington had pledged that air strikes against the Islamist State of Iraq and Syria (ISIS) would not target Syria army targets, the foreign minister said.

“This is what we explained bluntly to the Russians, and we asked them to use take advantage of the situation and provide us with advanced weapons,” he said.

Asked if he was referring to S-300 anti-aircraft missiles, which Damascus has long sought from Russia, Muallem replied: “Yes, and other advanced weapons.”

“We will get them and other advanced weapons in a reasonable period,” he said.

The United States has to date not targeted the Syrian military, so a Russian delivery at this point in time could be seen as a provocation.

This week the United States military did launch airstrikes against elements of JAN, an al-Qaeda affiliate. Observers such as Bill Roggio at LWJ find the CENTCOM identification of "Khorasan Group" misleading, as he and others believe it's more appropriate to identify the target as JAN and al-Qaeda. This writer is of the opinion there are valid reasons of a political nature for CENTCOM to ID the target(s) as "Khorasan," with regards to local Syrian opposition "hearts and minds" as well as perhaps Arab state members of the coalition.
Posted by Mark Pyruz at 3:11 AM

Iran's view regarding ISIL is not unified and as such the response from Iran will continuously be cautious. The IRGC is specially worried about increasing US presence in the region and it believes ISIL is an excuse for US to increase its military actions in Iraq, Syria and to certain degree its presence in the Persian Gulf. Having said that there is a unified view that ISIL is a direct threat against Iran and its interests in the region and that any strike against ISIL from the US will only makes the life easier for Iran. As such a double edge strategy is applied in which Iran will not protest against US bombings of ISIL and limited US presence on the ground in Iraq. Iran will not protest against arming or training by US of neutral or pro Iranian militias fighting ISIL but it will protest the arming of anti Assad militias or heavy US presence on the ground in Syria. Iran will also "tolerate" certain increase of US presence in the Persian Gulf due to needed efforts for missions against ISIL but any major increase in military presence will be severely against the long-term strategy of IRGC.
Iran's logic and rationale with regards to ISIL is that the US allies Saudi Arabia, Qatar and to certain degree Turkey are nurturing and facilitating the operations run by ISIL but the US is not making any move, not even at a verbal level, against these main sources of terrorism. As the sources of ISIL terrorism are not condemned by US, Iran believes any action against ISIL will not be effective. Furthermore Iran believes the US has a secret deal with petro-Arabs to lower oil prices and as a favor the US will save these countries from any criticism or condemnation. As US is only fighting the symptoms of the ISIL rather than its root cause Iran believes US is the main winner of this game as it will allow increasing US military presence in the region and at the same time decreasing oil prices which will be beneficial to the US and the West and a big loss to Iran and Russia.