IAEA: Iran Has Not Provided Explanations on Possible Military Dimensions of Nuclear Program 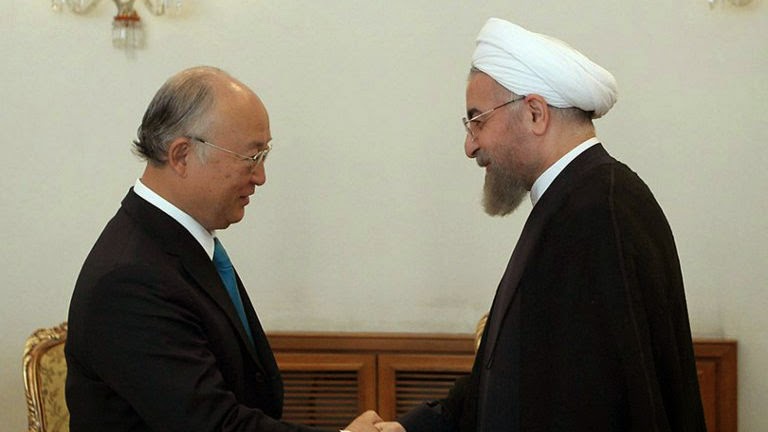 In its latest report on Iranian nuclear program, IAEA said Friday that its attempts to probe allegations that Iran worked on nuclear weapons were deadlocked. The finding on possible military dimensions of Iranian nuclear program could undermine chances for reaching a comprehensive nuclear agreement before the 24 November deadline.

Iran signed an agreement with IAEA in February to clear ambiguities about its alleged previous work on high-explosive detonators that can be used to set off nuclear explosions; work on high-explosive charges used in nuclear blasts; and alleged studies on calculating nuclear explosive yields. These are among the steps necessary to build a nuclear weapon. Since February, Iran has provided information only on detonators, saying they were used for oil exploration.

“Iran has not provided any explanations that enable the agency to clarify the outstanding practical measures,” said the IAEA report. (AP, 7 November)

It's quite possible the Iranians see this probe as a means of political leverage into pursuing general intelligence on Iran's military activities including access to the ballistic missile program, which the Iranians believe would undermine their strongest pillar of deterrence against attack.

If that's the case and your analysis represents the thinking of the Iranian leadership on the subject, they should not have signed the agreement with IAEA in February. Doesn't make sense to sign an agreement knowing that you would not want to implement it. Unfortunately it makes Iran's case weaker in Vienna.

BTW, the IAEA agreement is for inspection of very particular buildings/sections at Parchin; not all the base, and definitely not the sections dealing with ballistic missile program.

No amount of delusion by the western based Iranian diaspora living in the past can alter the FACT that there can be NO US-Iran deal as long as AIPAC and Zionists run America and now with the Republicans and tea party hawks controlling the senate, Obama has zero chance of even a fig leaf agreement. This is the sad FACT and people should recognize that.

AIPAC doesn't run America and whoever told you that it did has filled your head with nonsense.....and that's a FACT