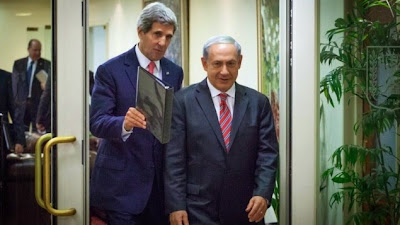 Khamenei posted comments on Twitter over the weekend saying that the “barbaric” Jewish state “has no cure but to be annihilated.”

“The remarks are offensive and reprehensible, and the entire international community should condemn such rhetoric,” said Psaki.

It is ironic how an 80 year old talk like that. What would happen if the barbaric Jewish state disappeared? I guess Israel disappears then peace is going to prevail in all Arab lands and IS will cease to exist! IS in a year has killed more Muslims and shias than Israel over many years. How dumb one can be!

Khamenei makes a statement of the most terrible kind right in the middle of these critical nuclear talks, but those are calculated words. Maybe he dont want his country to reach a comprehensive agreement.

"calculated" is quite correct. having seen that he's not going to get any deal on terms that please him and his band of ultra-conservative theocrats, the old man looks to cause a diversion for when he has to announce the regime's failure to the Iranian public.

AnonymousNovember 11, 2014 at 5:59 PM
Yeah,because obviously if they fail its irans fault...even tho` its been the west making unreasonable demand after unreasonable demand,trying to destroy irans economy with sanctions and all this alternating with military threats and acts of terrorism dating back to the mid 90s while irans only crime has been to stand up for its sovereign nuclear rights under international law

AnonymousNovember 11, 2014 at 11:51 AM
No part of the blame for isis and aq lies squarely with the decrepit western backed persian gulf states who export and support wahabism all over the globe,of course these groups couldnt have grown and prospered without the western initiated wars in various parts of the islamic world,so if you want to get rid of them first get rid of the western backed dictatorships but even then I would have grave doubts about the abilities of the sunnis to create any kind of viable modern polity/state.I also find it very ironic that the wahabists have done virtually nothing to fight israel or zionism preferring instead to kill their fellow muslims

Your observation about the Sunni militants killing fellow Muslims and forgetting about Israel is correct. You should have, however, made the same observation about the Iranian military and its Shia militia proxies: The Quds Force, the Lebanese Hezbollah and Shia militias are fighting and killing fellow Muslims, in Syria and in Iraq, and that’s all they are doing these days. The irony is the Quds (“Jerusalem”) Force was supposed to unite the Muslims for the “liberation” of Jerusalem. Which bring us to the main issue: The current sectarian battles and killings are lose-lose situation for all sides involved in the fighting. Sectarian conflicts and wars are easy to start, very difficult to end. Sunnis and Shias, regardless of their political allegiances, are better off to stop the killings.

Iran has not stood up, it has snuck around.

if it wished to stand up for sovereignty, it would withdraw from the NPT rather than continuing the charade.

Agree with Anon 1:29 the akhoonds are extremly shifty. Just as Mr Basrawi says...i would go further and claim that akhoond leader would rather drag the Iranian people into a war by forcing US to attack Iran's powerplants, just to keep his policy of "enmity towards US", than improve the lifes of the imprisoned people of Iran by coming to terms with US.

AnonymousNovember 12, 2014 at 1:29 PM
Iran has never violated the npt so it does not need to withdraw from it,its nuclear rights are inalienable and its not up to the west or anyone else to demand iran cease enrichment,and just when was iran "untruthful" or in violation of its "obligations"? iran has declared its nuclear facilities and these are monitored and inspected,the iaea has no right or mandate to go poking around military sites.The nature of this dispute is political

Nader UskowiNovember 12, 2014 at 10:09 AM
Yes they are,but the very critical big difference is that they are fighting armed insurgents and terrorists who in addition to deliberately targeting and killing unarmed muslim civilians are trying to overthrow allied governments and last time I looked iran and its allies werent chopping the heads off people just for being the wrong sect.What would you have had iran do?,sit back and do nothing because it did not want to kill fellow muslims?,its enemies,also muslims had absolutely no problem with doing this and would keep doing this regardless of whatever iran did,indeed many would say that iran was left with no choice in the matter,I`m sure the Quds force would much rather be fighting zionists but at the moment the jihadis represent the greater threat not just to irans interests but to muslims in the region as a whole.I agree these sectarian conflicts need to end but so long as you have the pgc funding,arming and encouraging the jihadis/insurgents through out the muslim world things are only going to get worse,personally I think it will take the military destruction of these groups to put an end to this in syria and iraq but so long as their backers remain untouched these groups and the deluded fools who join and support them will sadly continue to exist tho hopefully they will not present anywhere near the same threat as they do now

See that's your analysis, which could be quite right, but the facts still remain: We are witnessing large-scale sectarian fightings in the region; Sunni-Shia and Sunni-Sunni; Muslims killing Muslims in the name of Islam. Lebanese Hezbollah, example, was supposed to be the guarantor of Lebanon's sovereignty, not the main force in the Syrian civil war, killing fellow Muslims to keep Assad in power.

Majority of the youths involved in these sectarian fights would not have joined terrorist or militia organizations if they had any hope for their future. What the region needs is not sectarian wars, but economic, social and political development at large scale. Now that these wars have started, people need to find political solutions to end them now before they engulf all the countries in the region, beyond Syria and Iraq.

" Iran has never violated the npt "

you may believe that crock of crud, but the rest of the world, the IAEA and the UNSC sure as heck does not..... and compared to those folks, your opinion doesn't much matter.

AnonymousNovember 13, 2014 at 10:20 PM
No the iaea doesnt,according to it iran is in full compliance with its npt obligations,and as for "the rest of the word" the participants at the non aligned summit held in tehran,ie the real international community,supported irans nuclear rights and as for the security council which part of "politically motivated sanctions" do you not understand?.In future you really should check your facts before making these sorts of unsubstantiated statements as they do nothing for your credibility on this forum,simply repeating the same old western/zionist lies and unsubstantiated allegations does not make them any less false

whichever jackovs attended some Tehran schmoozefest or other doesn't change the rather central fact that the UNSC repeatedly has agreed the the Iranians are not in full compliance and Iran wouldn't be butt-deep in internationally imposed sanctions if you're weren't talking nonsense.

AnonymousNovember 14, 2014 at 5:14 PM
Good grief your ignorance is truly astounding,for a start the non aligned movement represents 120 nations quite a few more than the western so called "international community" in fact and they supported irans nuclear rights,to try and dismiss 120 nations of the world ie the true international community as "jackovs" just shows both your gross ignorance and your bias,as for the security council it is not up to them to decide irans nuclear rights,obligations or level of compliance that is the job of the iaea and they have found iran to be in full compliance with its npt obligations,what part of politically motivated do you not understand?,you keep on repeating the same old tired lies and accusations without any proof to back it up