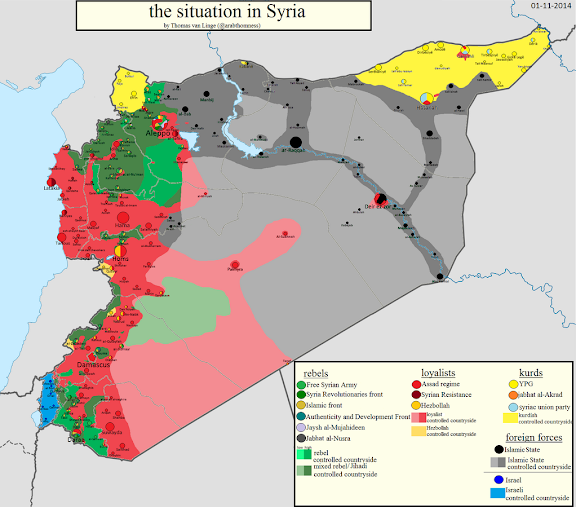 Two weeks ago at Uskowi on Iran, in referencing a Hurriyet Daily News report that the Turkish Foreign Ministry had summoned Iranian Ambassador to Turkey Alireza Bigdeli over statements from Iranian officials criticizing Ankara’s policies on Syria and blocking aid to Kobane, it was pointed out that Iranian forces and their allied Shia militias in Syria had not come to the aide of the Kurdish fighters in Kobane. What followed was a spirited debate over the matter in the comments section of two consecutive posts related to the subject.

A convenient map by Thomas van Linge has since materialized which illustrates the overall military situation in Syria, as well as IRGC-QF allied lines and positions. As is clearly visible, the nearest military forces to Kobane allied with IRGC-QF are roughly 150 km to the southwest and blocked by ISIL. Their shortest potential route towards Kobane would be Syrian motorway M4 and Route 20, which are ordinary roads; with the Euphrates River posing a potential water obstacle along the way.

Note also that closest IRGC-QF allied positions are currently engaged in position warfare in and about Aleppo, and that disengaging to attack eastward would seriously undermine their northernmost front. Moreover, such an eastward thrust would render exposed flanks the entire way should a penetration be achieved (which is doubtful).

The map also well illustrates the implausibility of providing logistical support by land for any IRGC-QF allied airmobile force inserted into Kobane-- in itself a high risk undertaking-- as well as the implausibility of an Iranian force transiting Iraq, where the Iraqi government would need to OK said force fighting their way through roughly 600 kilometers of enemy held territory-- a major offensive undertaking well beyond the logistical capabilities of Iran's Army and IRGC. The alternative would be an Iranian military force transiting Turkey to reach Kobane, which has zero chance of being approved by the Turks.

Below is a photographic depiction of what the Iranian Foreign Ministry was criticizing. Turkish Army M48 main battle tanks sit idle on a ridge within sight of Kobane, as the battle raged there three weeks ago. Turkish Army attitude remains so to the present day. 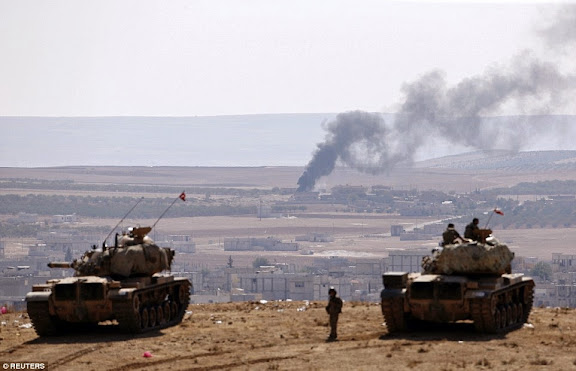 Meanwhile American volunteers have joined Kurdish forces against ISIL in Syria. See below: 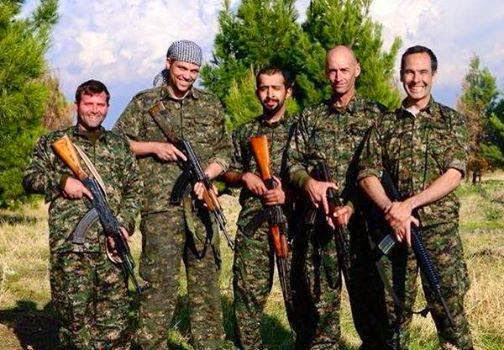 
It is this writer's contention that the current American bombing campaign assisting Kobane resembles in reduced scale that of the bombing campaign in support of the Khe Sanh fire base during the Vietnam War. In both cases a besieged ground force put up a determined defense, drawing funneled enemy forces on the offensive, to be pulverized by American tactical airpower that included strategic bombers employed in the tactical bombing role. 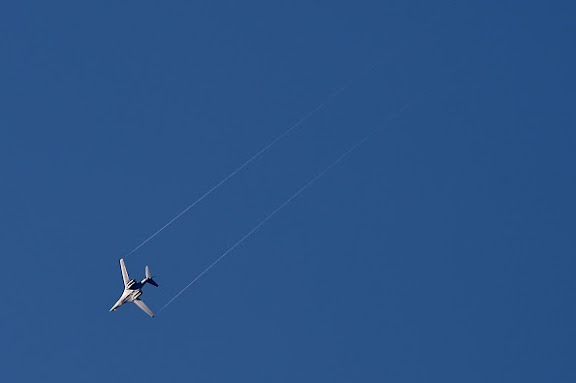 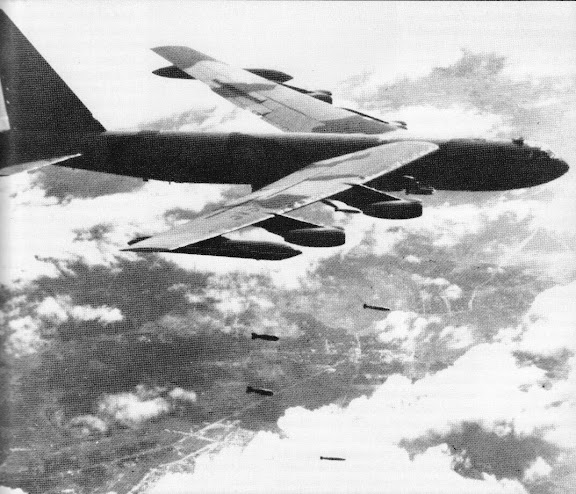 USAF Boeing B-52 Stratofortress strategic bomber on Aic Light Strike of type employed during Operation Niagara at Battle of Khe Sanh in 1968 (photo: Wikipedia). The more People's Army of Vietnam (PAVN) funneled forces into the Battle of Khe Sanh, the more the battle became a meat grinder churned by American tactical airpower.
Posted by Mark Pyruz at 3:41 AM

US is still using just a margin of its resources. Nonetheless the multinational bombing campaign, with ever increasing sorties being conducted, does have an effect. The fortunes has now turned in favor of the defenders of Kobane, YPG/Peshmerga/FSA. SIde note; if B-52's are included in the strike missions against ISIS targets, then instead of carrying iron bombs (as is the case in the picture), they will be armed with precision guided munitions e.g. sophisticated cruise-missiles.