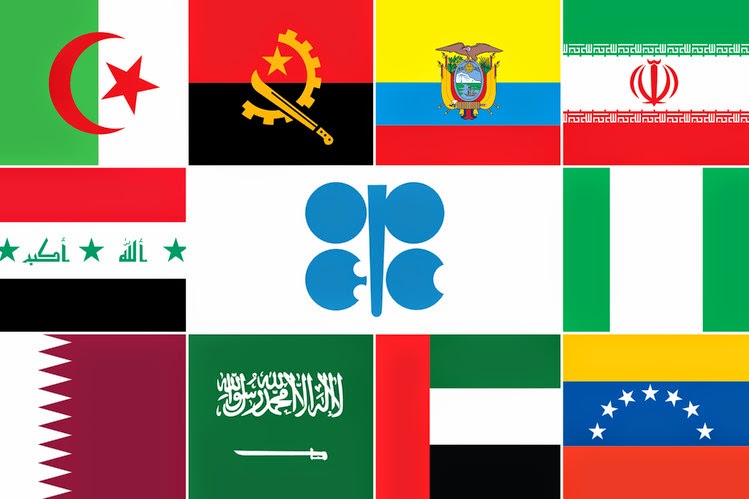 Oil slid to a four-year low after OPEC kept its oil production unchanged at today’s meeting, maintaining its collective ceiling of 30 million barrels a day. West Texas Intermediate crude tumbled nearly 5 percent to $69.19 a barrel, and Brent crude fell to $72.74.

Oil markets were hoping for a major production cut to support the falling oil prices. Saudi Arabia, the de-facto leader of OPEC, along with all Persian Gulf producers, stopped a proposal to drastically cut the output, supported by Venezuela, with strong political backing of giant non-member producer Russia. Iran apparently wanted OPEC to cut output, but not its own production levels.

Photo: OPEC flag in the center, surrounded by the flags of its 12 member states.
Posted by Nader Uskowi at 1:19 PM

Iran is getting the worst of it.

Venezuela is a mess that Chavez left behind him because he surrounded himself with sycophants rather than competent people.

the horrible deals Chavez made with the Chinese while he borrowed money from them....along with the way Chavez allowed Venezuela's oil-field production infrastructure to decay to the point that the country can only pump 2.1M barrels/day rather than the 3.2 of former years has sent the national income plummeting at the same time that the ridiculous monetary and economic policies have made the missing income vital.

Why on earth Iran wants to lower oil price while it has a huge budget deficit?