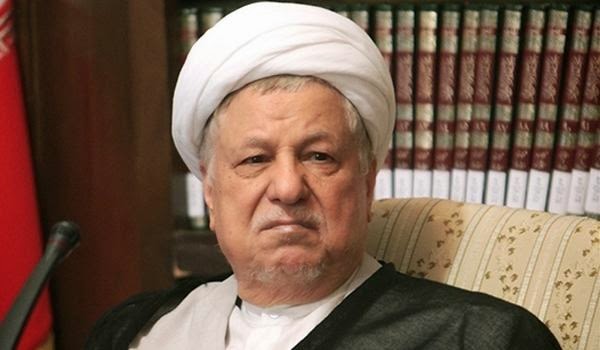 “In this period of time that conspiracies have targeted the land of the Islamic Ummah, stopping the sentence for Ayatollah Sheik Nimr Bagher al-Nimr will disappoint those who sow discord, will increase interaction and settle the problems of the Muslim world,” Hashemi Rafsanjani said his letter to King Abdullah, dated 25 October. “Muslims expect you to take such a decision.” (Al-Youm al-Samen/Fars News Agency, 2 November)

A Saudi court handed down the death penalty against the Shia cleric on 15 October after convicting him of sedition for delivering anti-regime speeches and defending political prisoners. Amnesty International has denounced the sentence as “appalling.”

The execution of Sheikh Nimr could have had dangerous repercussions in Saudi-Iran relations and could have further inflamed the current Sunni-Shia conflict in the region.

and yet in Iran, a woman is held in solitary confinement for months after her arrest and then sentenced to further imprisonment for "propagating against the ruling system" .

Iranians continue to be oppressed by the vile theocratic regime and probably have little to offer even the vile Saudi regime in advice concerning justice.

DUBAI, United Arab Emirates (AP) — An Iranian-British woman detained while trying to attend a men's volleyball game in Iran has been found guilty of spreading propaganda against the ruling system and sentenced to a year in prison, her lawyer said Sunday.

Britain immediately raised concerns about Ghoncheh Ghavami's trial. The case highlighted the limits to free expression inside Iran and efforts by authorities to enforce strict interpretations of Islamic norms despite a policy of greater openness being pursued by moderate President Hassan Rouhani.

So, Saudi Arabia doesn't wanna piss off Iran? Is that what this little piece of news suggests?

Piruz - with due respect you are not seeing the big picture.IRAN can make life a hell for the KSA ! very easily.@sponsor mayhem there and the masses get to demand some rights.

I actually do see what you're talking about. Iran today has encircled Saudi Arabia from Iraq, Yemen, the Red Sea and is trying to do so from Bahrain (we know the Saudis wanted to annex Bahrain but after Iran issued loud threats the project was "delayed" or whatever word they're politically comfortable with), so creating border problems shouldn't be too difficult (this, too, has happened in the past).

But we're talking about a Saudi citizen here, not some regional matter. If Iran can stop Saudi Arabia from executing one of its own citizens, then this is something else!