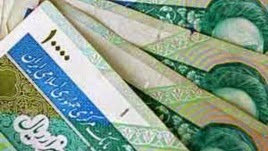 Today, the Iranian national currency traded at 34,000 rials per dollar. This is a new low during Rouhani administration. In June 2013, Rouhani’s surprise victory stopped the downward spiral of the rial. Since the beginning of 2014, however, rial has slowly lost ground and in the past week the trend has accelerated. Today’s rate is a loss of nearly 14 percent in the value of rial since Rouhani’s election. The failure of Vienna talks to produce a final nuclear agreement and the plunging oil prices are believed to be the main causes for the falling value of the rial.

Oil Prices have also continued their downward trend, with Brent crude trading at $70 a barrel. Between the loss in export levels after oil sanctions went into effect in 2012, and the recent drop in oil prices, Iran’s oil export revenues, its main foreign currency source, are a third of what they were only two years ago.

Meantime, Rouhani administration on Saturday decided to delay planned subsidy reforms. The government probably regards the subsidy cuts as politically inconvenient, expecting backlash. The decision to delay, however, will put added pressure on the value of rial and could reverse recent gains in the fight against inflation. These are indeed challenging times for the Iranian economy.

and the currency will fall further in the wake of Iran's failure to conclude a nuke deal.

very bad news for Iranians who aren't well off and who enjoy eating.

This is going to continue because Iran didn't conclude the deal, due to some mullah hardliners.

The economy will get WORSE. hardline mullahs will deny it because they are sitting on a sea of wealth and control important economical and political centers and with a goon army to clamp down. So why give a shit.

The most dangerous type of gangster is the one who think he is fighting for god.

at the end of the day economy will find a new working point. From a long term view it was going to happen since oil/gas reserve is going to be useless in the next decades. Now it happens a little earlier which is not a bad thing and force the gov. to depoliticize the economy in order for IR to be able to survive. Few million people will suffer but it was the cost that Iran was going to pay at some point.

the only reason for the existence of the government is to prevent mass suffering.

Iran's government has not only mismanaged the economy, it's stolen the oil income and diverted it abroad while at home the government has stolen wealth from Iran's citizens and given it to regime supporters so as to insulate the theocratic dictatorship from dissent and unrest.

give the IRGC control of property and industries and perpetuate the dictatorship....


...and, yes, a few million Iranian citizens will suffer...while most of the rest will neither prosper nor be free of an oppressive regime's oppression.