Iraqi President in Riyadh for ‘Normalizing Diplomatic and Political Relations’ 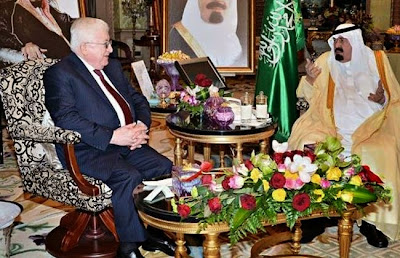 The Iraqi President Fuad Masum said in a statement today that during his talks with Saudi King Abdullah on Tuesday, the Saudi monarch praised Ayatollah Sistani’s role in sustaining unity in Iraq.

“President Fuad Masum met with Suadi King where they discussed mutual relations and means of promoting them. The Saudi King praised the stance and role of the Religious Authority Sistani in sustaining unity and security in Iraq,” said a statement issued by the office of Iraqi president. (Iraqi News, 12 November)

Masum arrived in Riyadh on Tuesday in an attempt at patching up long-strained relations between the two countries as Baghdad battles Jihadist militants, a senior Iraqi official told the Daily Star on Wednesday. The meeting between Masum and King Abdullah was the highest-level contact between the neighboring countries in years.

Maliki’s eight years in office were marked by tensions with Saudi Arabia, with Riyadh blaming Maliki’s government for sectarian policies that helped the rise of the Islamic State. Ayatollah Sistani, however, has been a voice of moderation in the country and has called for fair treatment of minorities, including the Sunnis, and closer relations with the Sunni world.

Also, Maliki's political power in Iraq has not terminated. He still maintains a level of support, both within Iraq and regionally. Whether or not we here outside of Iraq find this inconvenient or even troubling is beside the point, that is the situation we are seeing.

Troubling is a word used by the Iraqis when they refer to Maliki and his unpredictable manners and sectarian ways. He was an important reason behind the re-emergence of Sunni militancy in Anbar. Against sound advice he decided to send tanks to the streets of Ramadi and Fallujah to attack peaceful Sunni protesters. Months later ISIL overran Fallujah. Prominent Iraqi Shias such as Ayatollah Sistani also share that sentiment about Maliki and wanted him out. Quds Force commander Gen. Soleimani is also known to have stopped his support. However, Maliki apparently enjoys the support of Khamenei and the hard right inside Iran, and that is what's unfortunate and frankly not very wise