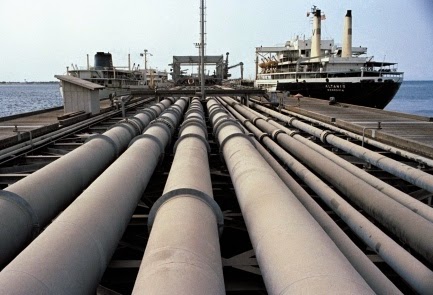 Iran’s oil exports to Asia fell below 1 million barrels per day in October to the lowest level in a year. Iran exported 877,888 bpd to China, India, Japan and South Korea, its biggest buyers, Reuters reported today. Iran exported an average of 1.1 million bpd to Asia in January-September this year.

Seasonal demand fluctuations could have been the cause of the sharp drop in exports last month, but generally Iran is facing difficulty in raising exports to make up lost revenues due to falling prices by nearly 40 percent.

UPDATE: Brent price continued its fall on Friday, trading at $70.15 per barrel.

You can't increase production , you can't even use your own assets or move money around and the little you could produce has now drastically decreased in price. Oh and your resistance economy got shafted, OPEC wouldn't decrease production. same as what they did to saddam in 1991.
Iran's economy is getting crushed.

this is what happens when some penny worth mullah starts running the country and shouts death to this and that every friday.

I didn't know that Uskowi is actually Khamenei.
but don't be worried Iran economy will adapt eventually,