Rarely seen publicity photographs of IRGC-QF Commander Maj. Gen. Qasem Soleimani during his time as a young  IRGC commander in the Iran-Iraq War. Photos were posted on an Iranian history and  research blog, then reposted at Mashregh News (additional pics can be found at these two sites). Final photo in this set is Soleimani as he appears today. 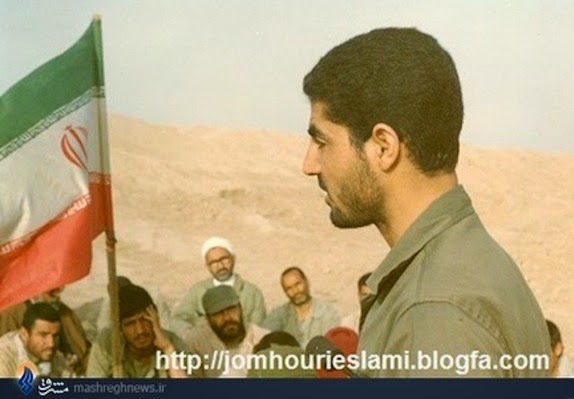 Qasem Soleimani in his mid-20s: a young IRGC commander during the Iran-Iraq War 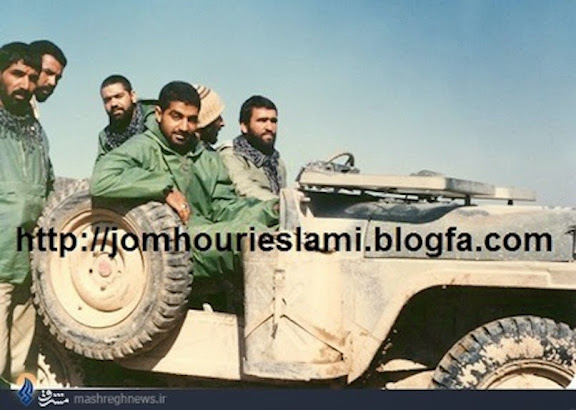 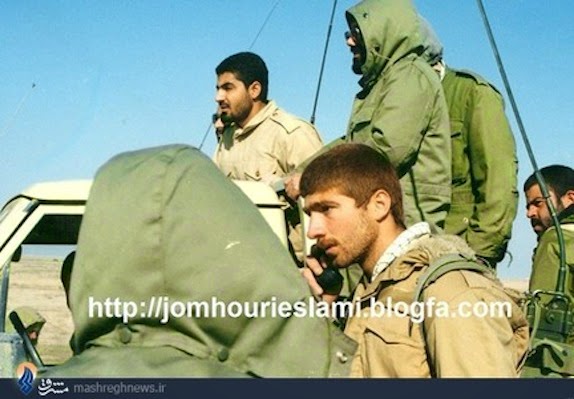 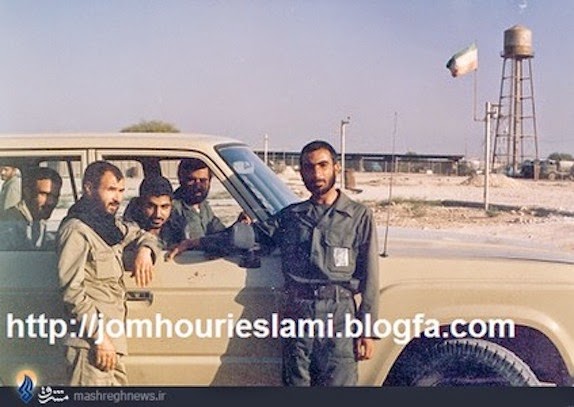 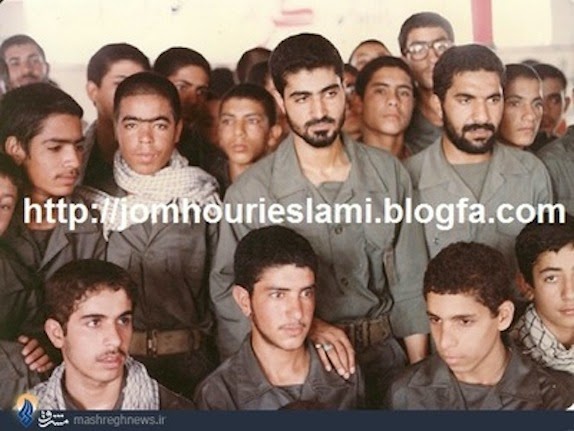 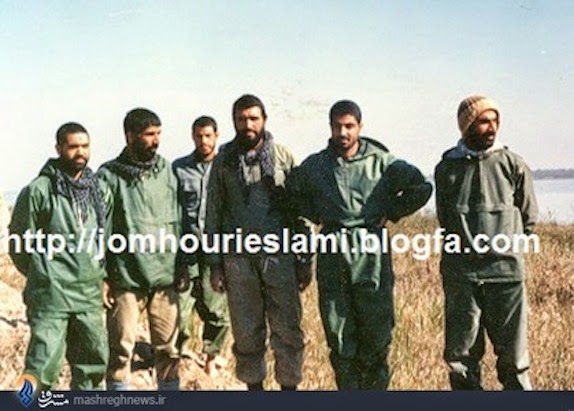 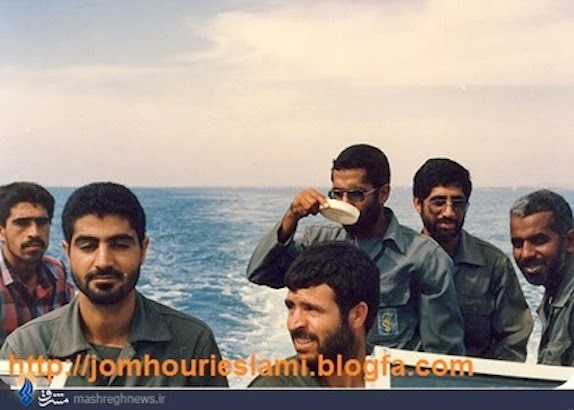 Soleimani among IRGC guardsmen, aboard watercraft somewhere on or near Arvand Rud (“Shatt al-Arab”) 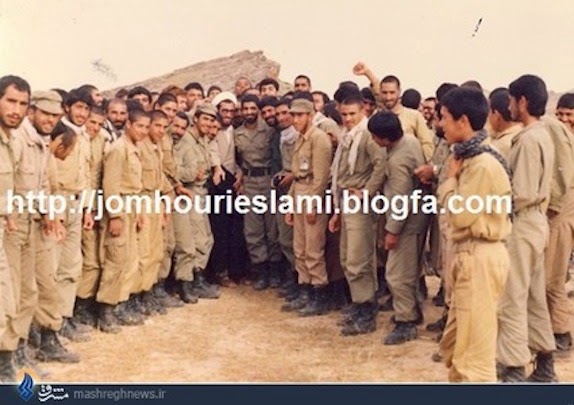 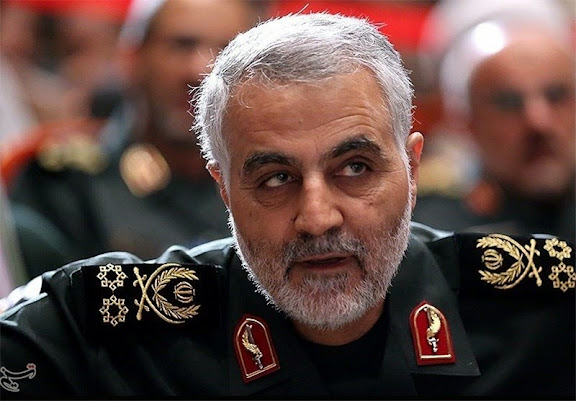 Qasem Soleimani in 2014: a 57-year-old major general and commander of IRGC-QF
Posted by Mark Pyruz at 12:05 AM

My God! Where do they recruit these boys from (I don't mean Soleimani, I mean the guys with him)?

They look strikingly similar to Afghans, Pakis and the like. Again I don't mean to be racist. I'm just wondering why they look so different from civilians.

Not being racist how? If the lads aren't looking Aryan Warrior enough for you maybe it is because they are tired hungry and fighting a desperate war!

So do you look any different yourself.these people have been at the front months at a time with little sleep or rest .let alone the mental and physical pressures.

Iran is a multi ethnic country. People from Balochestan and the Bandari regions don't look like people from the northern reagons.

That's a peculiar comment coming from an Iranian. Don't you know about the ethnic diversity of your own country?

I do. But I also know that about 65% are Persians, and that 7% are Kurds. That's 71% white/light skinned majority of whom, yes, lots of people are an exception in that they are dark-skinned.

There has to be an explanation!

I've noticed the same thing in Saudi Arabia, where the army has so many black-negroid soldiers, something which isn't very common in Saudi's main cities. I can only assume that these black soldiers aren't even Saudi, but are descended from poor and immigrant families.

Have you lived in Iran? I went to School (Western and Northern part of Tehran ) and a lot of my friends and pupils looked the same and they were "persians" and from other parts of Iran )Their parents had moved to Tehran.
If you still find these Young soldiers White enough maybe one explanation is that they are local boys from mostly southern and western parts of Iran fighting to retake their cities.

Soleimani, of course, is one of the people named as offensive and officially sanctioned by the United Nations Security Council in Resolution 1747 (March 2007)

he is also considered a terrorist and official listed as one by the government of the USA.

but Pyruz likes to look at pictures of Soleimani

AnonymousJuly 17, 2014 at 8:32 PM
Oh well,if the us says hes a terrorist then I guess he must be.Do you actually realise how ridiculous your post is

For Soleimani to reach the hights of power under the islamic terrorist theocracy he would have had to murdered thousands of Iranians to achieve it.

Anon 3:00 AM,the US must know something about this man because they always support islamist movements like ISIS,ISAL,Talaban,Morsi of Egypt and the mother of them all the Islamic Theocracy in Iran.

Haven't you lived in Iran?! most of Iranians have darker skin tone than Europeans(due to genetics and weather)

The reason this guys look like this is because of their lost weigh, hair cut and the burning sun.

If you had any conscript in your family , you will notice that after the short hair cut and losing some weight, they all look alike, also Iran is mostly a hot and sunny place and members of our military are constantly working under these condition which will further darken their skin.

And also Iranian army doesn't recruit foreign immigrants, you have to has Iranian citizenship and during the recruiting phase if it is established you have foreign ancestors in the last 100 years you will lose some points.

AnonymousJuly 18, 2014 at 8:53 AM
"US must know something about this man because they always support islamist movements like ISIS,ISAL,Talaban,Morsi of Egypt and the mother of them all the Islamic Theocracy in Iran"
After reading the above comment I can only think"what planet are you on?!?",the us overthrew the taliban and has spent 13 years fighting them,it supported the coup against morsi,its end goal in iran has always been regime change,and oh yes,there was this little thing called:The GREAT WAR ON TERROR where the us and its allies attacked islamists all over the globe,you do remember that dont you?.In future you might want to actually read what you are writing that way hopefully you will avoid writing the sort of utter nonsense that you posted at 8:53 AM

@Farzam,does this apply to the Larijani brothers and head of the basiji forces (all Iraqi)? Being Iranian doesn't mean a thing anymore,shiite what counts at this present moment.

@Anon 11:35 AM, There is an old saying "that the truth hurts" and the truth is that the US and Britain always support islamic ideological systems. The talaban was created by the US to fight the soviets in Afghanistan. The "war on terror" was just an excuss to turn Iraq into what it is today a ruin and ISIS infested country. Remember ISIS is supported in Syria by the west against Assad so how can the US and UK be against them in Iraq?? Islamic systems are created by the west to plunder and oppress citizens of those countries while the west pretends to fight "THE GREAT WAR ON TERROR". Hopefully in the future your sound bites against me won't sound so hilarious!!