‘This Will Lead Nowhere’ – Khamenei on Nuclear Talks 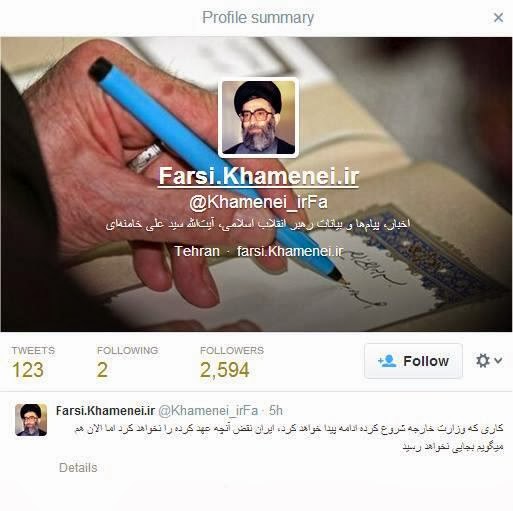 Iran’s Supreme Leader Ali Khamenei tweeted today that the Iranian Foreign Ministry will continue its work (said in the context of nuclear negotiations with the world powers) and Iran will honor commitments it has made so far (referring to 24 November interim agreement). But the ayatollah added his definite and negative take on the talks: “I say this now, this will lead nowhere.”

“The work that the Foreign Ministry has begun will continue; Iran will not break its commitment made so far. But I say this now, this will lead nowhere,” said the tweet on Khamenei’s official Twitter account. (Khamenei_irFa, 17 February)

Let's all hope he over reaches again, this time hopefully leading to this evil person's death

It's been clear from the outset that the majority of Parliament, the IRGC and the SL branch of IRIG are expecting ultimate failure for a comprehensive nuclear deal.

This expectation is based on the history of failures the country has experienced in dealing with the West, since 1979.

The Rouhani administration is rendered in a vulnerable position,,should nuclear negotiations break down, worse even than the Khatami administration following its fax delivery to the US via the Swiss embassy and its assistance to the US at the onset of OIF, the ultimate result of which was being branded as part of an "Axis of Evil."

Khamenei seems depressed. He's got a full plate and along comes this anti-regime protest infront of IRIB headquarters in Isfahan. Will more people rise up against the ruling authority? How will he handle the newly started dissent?

That's because he and his ilk know that the Islamic regime is the true enemy of the Iranian nation.

This regime thrives on creating crisis in order to cling to power and avoid meeting the legitimate demands of its people. They are asking to be sanctioned even more severely and then when they are down to their knees have their nuclear and military installations leveled to the ground.
The ones like Rohani and Zarif who are educated and know about the realities of the world politics are trying to to save the country. The backward Mullahs who have not put a foot outside Qom are working against them and in a couple of years they will pay the ultimate price for this idiotic policy.

Rouhani and Zarif are cut from the same cloth as the rest of the criminal IRI establishment. They are trying to save the regime like the good little minions they are. The backward mullahs dug their own graves when they decided to go into politics and now is pay back time.