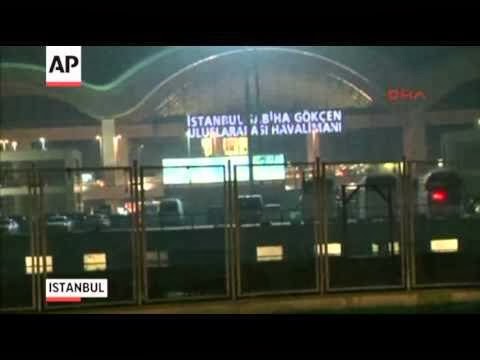 A Ukrainian hijacker tried to divert a Turkey-bound Pegasus Airlines flight to Sochi on Friday on the day of the Winter Olympics' opening ceremony. The 45-year old man, identified by Turkish media as Artem Hozlov, told the crew he had placed a bomb on the plane. He apparently demanded that the Ukrainian government release detained anti-government protesters. (AP, 8 February)

The crew reportedly tricked the hijacker and landed the plane in Istanbul where he was subdued by security officers who sneaked on board.

As Professor Juan Cole has noted in his Informed Comment today, the hijacker, presumably an Eastern Orthodox Christian threatened to blow up an airplane full of innocent passengers. But the press reports, including the AP article used here, did not refer to him as “terrorist.” The plot was foiled by Turkish officers, presumably Muslims. But if the hijacker had been a Muslim, the press would likely have declared him a terrorist. And the press would have written extensively about the heroes who foiled the plot if the security officers were not Muslims.

Photo credit: The scene at Istanbul airport after security officers foiled a hijacking attemp of a Pegasus Airlines. (AP/Informed Comment)

The West has been attempting, over last three decades, to overtake the Ukraine under its total influence.

For those, who would invoke a violation of 'human rights' by the Ukrainian regime, I would only cite, that penalties for the acts of vandalism commited by "protesters" in western countries are couple times harsher, than those under the laws of Ukraine.
And in the US, penalty for attempting to overthrow the government is 20 years in prison, while in the Ukraine only 10 years..........

Plans of the West, may apparently envision, in the future, the same (Ukrainian) scenario for Russia and Iran, however is one important obstacle that the Islamic Republic has created its Basiji forces........