Karrubi Transferred to His House in Jamaran 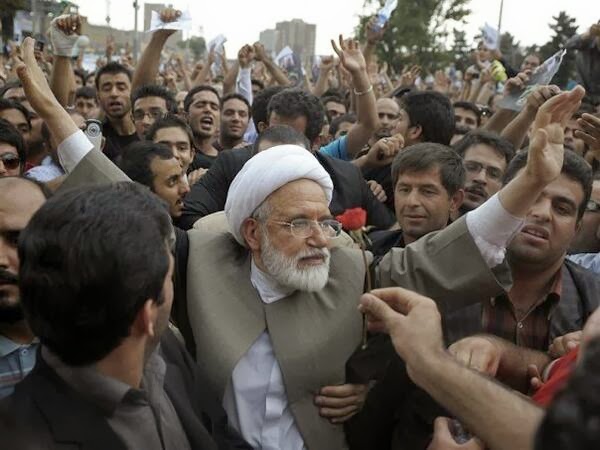 Iran opposition leader Mehdi Karrubi today was transferred to his own home in Jamaran district of Tehran. Karrubi has been under house arrest for more than three years in a “safe house” of the ministry of intelligence. He will still be under arrest, but in his own house.

Karrubi, along with the other leader of the Green Movement, Mir Hossein Mousavi, has been under house arrest without charge. They led the Green Movement of 2009 against what millions of protesters believed were irregularities in that year’s presidential election after Ahmadinejad was declared the winner.

As long as mullahs like Karrubi are so-called leaders of "opposition" Iran will remain under the yoke of this regime.
Karrubi,Mousavi,Khatami and now Rouhani have only the interest of the regime in mind and are servants of the valih-e-faqih. Thank god everyone knows this now.

From a security standpoint, the detention of Mousavi and Karrubi has been a success.

Officials had given Mousavi and Karrubi a chance to provide evidence of voter fraud. As is well laid out by the Brill election analysis and by the Leveretts in Going to Tehran, the two failed in putting forth evidence. It was only after this failure and the two openly incited violence on the streets that they were detained. Order was restored.

For objective readers that haven't read the Brill analysis, it can be accessed HERE. To this day it has yet to be successfully refuted.

To read the Leveretts historical rundown on the subject (including a new afterword, click HERE.

There are a number of other resources, as well, such as numerous public opinion polls using sound methodologies. They're still available on the internet and listed in the Leverett book.

To get a sense of the "insights" of the above-named Mollah Regime lobbyist couple, the Leveretts, and their "analysis", one needs to read their predictions published just one day before the Khomeinist regime's latest so-called ersatz "elections":

"The data strongly suggest that no candidate will win a majority of votes cast on June 14—meaning there will almost certainly be a second-round runoff on June 21 between the first round’s two best performers. Among the four leading candidates—Jalili, Qalibaf, Rezae, and Rohani—Qalibaf seems best positioned to make a runoff; more voters now say they will cast first-round votes for him than for anyone else."

There you go. And that's "data" for you from the Mollah Regime :-)

From security standpoint, detention without charge of opposition leaders, an approach borrowed from totalitarian systems, is always a success, up to a point!

The behavior of the Islamic Republic in declaring Ahmadinejad the winner within 5 minutes after the polls were closed and its total disregard to so many signs of irregularities in the election and its prolonged campaign against protesters and imprisonment of so many young people were more the signs of an electoral coup than a free election.

The election became very costly for the Islamic Republic. It forced Khamenei to so forcefully and publicly side with Ahmadinejad in opposition to the country’s wartime prime minister and speaker of Majlis. Up to then, the supreme leader was the facilitator of last resort for any serious disagreement within the senior ranks of the regime, resolving outstanding problems, now he had become part of the problem.

Mousavi and his administration would have worked very close to Khamenei; much the same way Rouhani handles his role. Ahmadinejad almost destroyed the Islamic Republic. Siding with Ahmadinejad was Khamenei’s biggest mistake in those fateful days in 2009.

Well to be fair this shows the political maurity of Iranian people that allowed a little piece of scumbag (I make no apologies to call him that name) to run for two terms of office! At the end of the day these clowns are all the same. Either they are from religious families like practically all or they come from majority rural or lower class people like that Ahmaghinejad. It is indeed a sorry affair to have these low lifes around.

Are you working for new israeli internet workforce ???