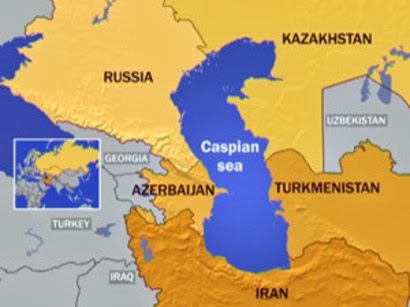 Iranian Ambassador to Moscow Mehdi Sanayee warned of the threats posed by the “militarization of the Caspian Sea.”

Sanayee made the remarks today in Tehran during a conference on Caspian Sea, ‘What Are Iran’s Optimum Interests in the Caspian Sea and How Are They Provided?’

He added, “Iran considers any action in this respect (militarization of Caspian) in contradiction to regional security and interests and the prevention of foreign presence in the Caspian area is highly important for Iran.”

It’s customary for Iranian government officials to make major statement like what Ambassador Sanayee said on the danger of militarization of the Caspian Sea without offering the underlying reasons. Which of the five littoral states are expanding their naval bases and military presence in the Caspian? It's believed that Iran is concerned that Azerbaijan might expand its military bases at the Caspian to facilitate the transfer of U.S. military personnel and equipment during its withdrawal from Afghanistan at the end of this year.

Azerbaijan ought to return that bit territory West of Armenia!

You might have had us going Iran if you hadn't launched the 3rd largest warship in the Caspian last year.

(#1 and #2 are two Russian frigates of slightly higher displacement).