Iraqi security forces (ISF) at or near Anbar Province, in deployments against Al-Qaeda linked armed groups (photos from the past 48 hours, Reuters): 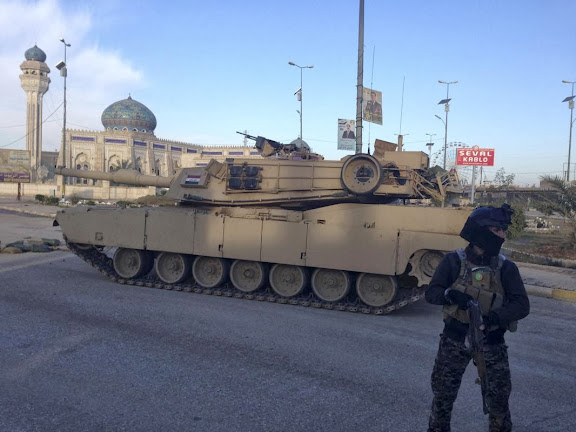 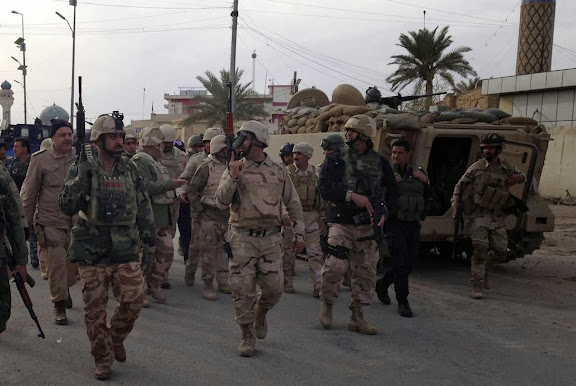 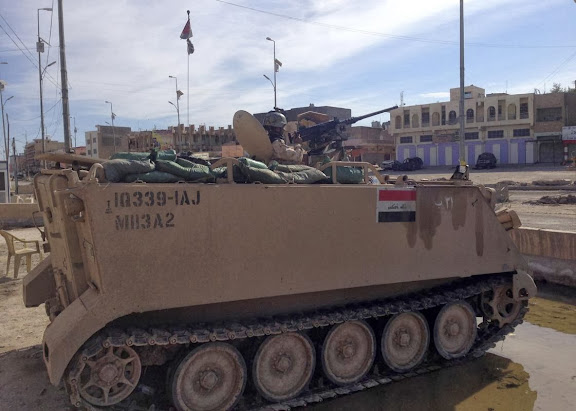 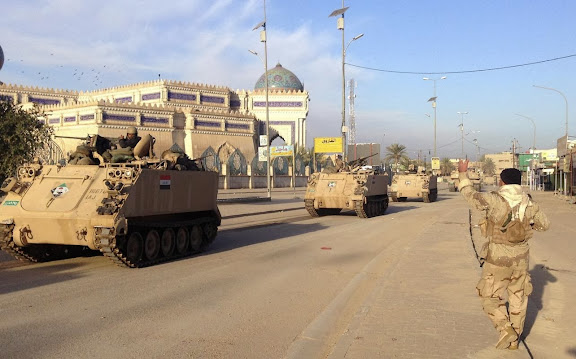 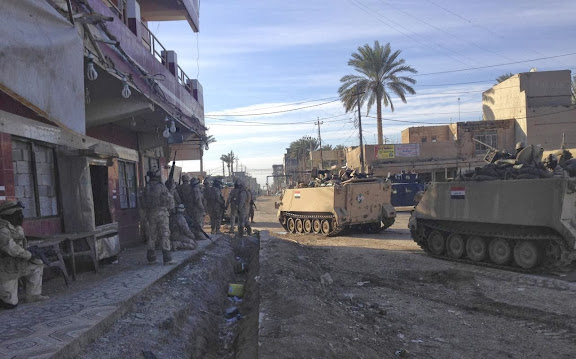 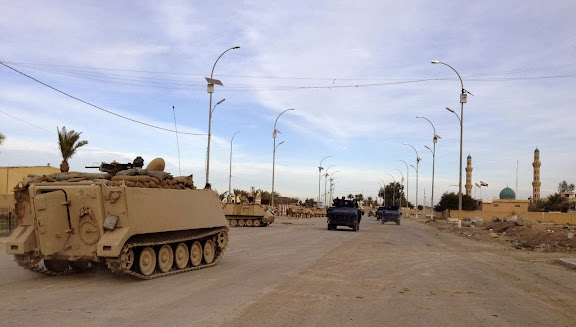 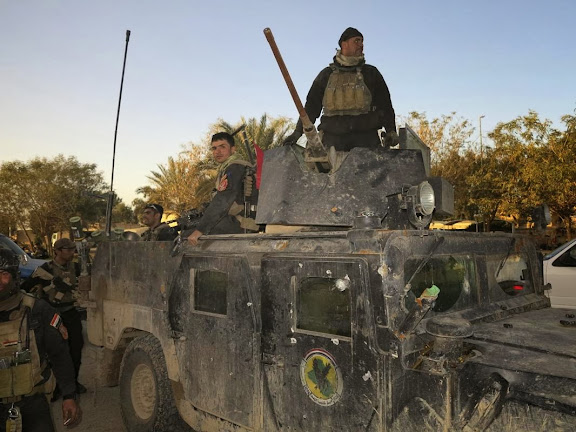 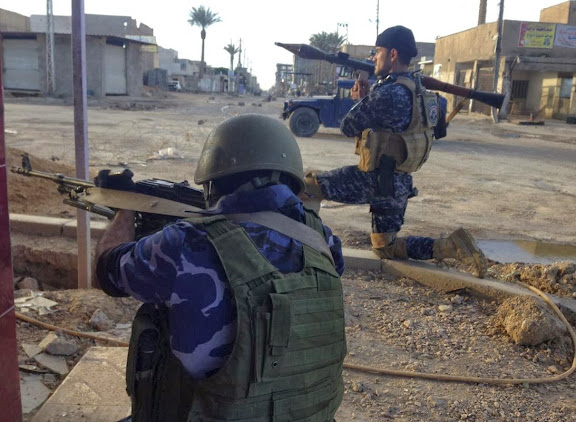 Elements of Iraqi Federal Police mechanized battalion equipped with PKM and RPG
Posted by Mark Pyruz at 2:36 AM

These are great equipment, surely needed to fight the Al Qaeda and the ISIS. I certainly hope the Iraqi military has maintained the equipment and has trained manpower needed to use them effectively.

My main concern, however, is the political/sectarian aspect of the problem: Maliki government used Iraqi Security Forces not long ago to wage an indiscriminate attack against the Sunnis during the popular street protests in Sunni-majority provinces, not distinguishing between Sunni opposition to the central government's policies and priorities, and ISIS and their terrorist supporters. Now Maliki wants to get the support of the Sunni population and the opposition to defeat ISIS.

The experience should be a lesson for Maliki: You can not rule as the leader of the Shias in a country that has Sunni and Kurdish dominated regions and provinces, and hope to be accepted as the "national" leader of the country during times of crisis, like what ISF faces in Fallujah and Ramadi these days. He needs to revamp his cabinet and its policies to be much more inclusive and not sectarian.

This is a very naive and simplistic view of this crisis. Maliki can try all the that he wants, unless all Shiite and Kurdish politicians are removed from power this will not stop, at least this the perspective of the aggressors. And this is not just ISIS/Al-Qaida, but for the first time since the invasion in 2003 all the different Sunni factions (Islamist, Baathist, mercenaries and associated tribes) have a truce, putting their differences aside and focussing on the most common denominator: The despise for Shias.

A base has already been established in Jordan, with political/propaganda and financial support form Saudi Arabia and Qatar, so a civil war is already in the making. The ISIS just became active much sooner than anticipated, either to evaluate the military capabilities of the government, or they just became impatient on want to ride on the wave from the successful operations in Syria.

Articles like this one, explain that very well:
http://www.theguardian.com/world/2013/mar/13/iraq-sunnis-unite-oust-shia-government

Maliki is a major factor in driving Shia-Sunni relations to this dangerous state. Sunnis comprise a significant percentage of the population and they have the right to be significantly represented in leadership positions, including the ISF leadership. Otherwise, the Sunnis will not support the government wholeheartedly in its figt against the terrorists.

The existence of Shia-Sunni conflict in the region is no secret; so is the Sunni-Sunni conflict, between the moderates and the Salafists, and at times much more intense with more far-reaching consequences. And so is the Shia-Shia conflict, between the moderates and the followers of absolute rule of a leader. These conflicts all show us that the basic questions about what the nature of Islamic society and Islamic government have not been settled and the Muslim world is in the midst of an internal struggle to come up with answers. How to define an Islamic government and societies in the modern world.

The existence of these historic conflicts, however, does not justify sectarian policies of any government. It will stop debates and starts wars, religious wars that tend to last forever when started. Iraqi government should reconsider its past policies and go for inclusion, not more sectarianism.

How come you portray them as a terrorists, when they according to your western standards should be called "insurgensts" or "freedom fighters" ?

I have herd that western journalists describe people related to terrorist attacks in Chechnya and Dagestan, as the insurgents, who fight for their freedoms against "Russian oppression"?

I wonder what would the "+ or -A" and others, elaborate on my questions?

Al Qaeda and its affiliated groups, as well as ISIS, which has been disowned by Al Qaeda leadership, are terrorist organizations as committing terror is their main mode of operation; hitting targets in Syria, in Afghanistan and Pakistan, or in New York and Washington. But terrorist acts are not the monopoly of those organizations; as state actors could also resort to terrorist acts, like bombarding their own citizens, assassinating their opponents or massacring their prisoners. Let’s hope terrorist acts stop being so numerous in our world.

And in this brilliant analysis, where do you put armed Shia militias fighting in Syria and Iraq, or the Huthis in Yemen? Freedom fighters or terrorists?

According to people like Anon 6:57 PM, armed Shia militias are angels. Any Iranian that is against the Islamic regime is a "zionist" and "rascist" and "a supporter of Al Qaeda". If that isn't hilarious I don't know what is !!

That "brilliant analysis" is the from the western, mainstream media and everyone else who supports the so-called "pro-democracy", "peaceful protestors" of the al qaeda groups attacking Syria. That's why those supporters promote such groups in Syria but, condemn and attack them when they cross the border into Iraq.