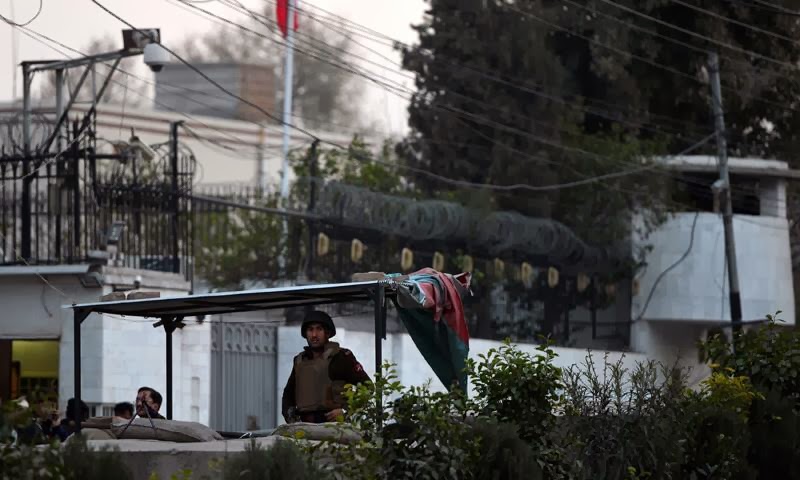 Two security guards were killed and more than a dozen people were wounded today when a suicide bomber blew himself up at the gate of the Iranian consulate in Peshawar, in northwest Pakistan. Reuters, quoting local police officers, reported that the man intended to enter the consulate building but was stopped by the guards at the gate, and that’s when he blew himself up.

The bombing came amid tensions at Iran-Pakistan border, with the expectations that the Iranian military might stage a cross border operations to rescue five Iranian border guards taken hostage and believed to have been taken to the Pakistani side of the border.  On 9 February, the militant Baluch group Jaish al-Adl (“Army of Justice”) took responsibility for taking the guards hostage. Since then there has been growing pressure on Iranian military to take search and rescue operations across the border.

If previous Iranian military cross-border actions against militant groups are any indication, the IRGC will deploy rocket launchers and field guns at the Pakistani border and could use IRGC’s Special Forces (Saberin) to free the hostages. It is doubtful, however, if Iran would escalate the operations by deploying IRGC Su-25 jet fighters in support of its troops on the ground.

It wouldn't be the first time the IRGC conducts a cross border operation to free hostages.

I have read your post and "basing analysis on previous cross-border actions" is a generic term that could also include or refer military operations crossing the border to Iraq in anti-terror campaigns or anti-drug busting operations in Afghanistan.

I just wanted to point out to readers that this situation is not unique and there has been at least one operation in a identical case, to free captured security personal in Pakistan.

Thanks much for clarification. We'll take note of it.

We have deleted your racist comments. You accuse a country and its people of savagery, but indeed it's your comments that presented a savage viewpoint.

You also deleted my comment about the "founding fathers", of YOU or your friends, who called Savage Indians,in their 1776 "Declaration of Independence", apparently reffering to the Native Nations (people) of America.

The head of Iranian Parliament’s National Security Commission declared that Jeysh-ol-adl is a terrorist group and, as such, there can be no negotiations with it. “We only deal with the Pakistani government,” Alaeddin Boroujerdi said; “If there is any need for negotiating, the Pakistani government will have to decide on it.” The abducted officers are said to have been taken into Pakistan.

Don't know which comment you are referring to, if you give us the date we can research. But don't forget, you are living in the 21st Century; with so many sacrifices and achievements in the fight against racism in the past decades.