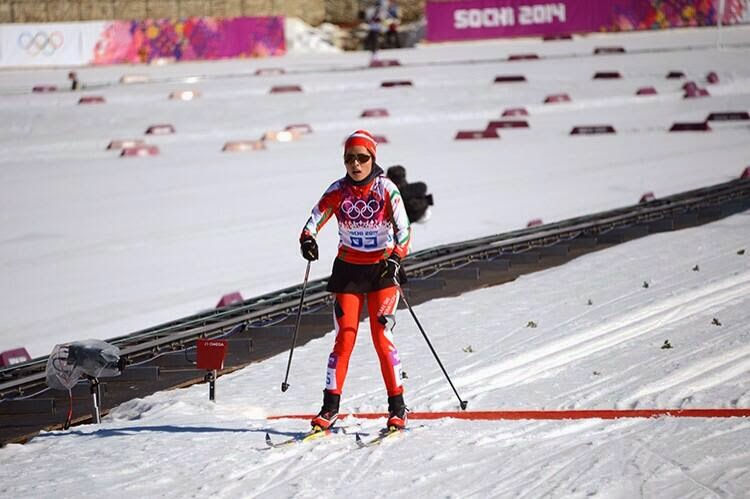 A brave lone soul deserving of a better sporting nurture. Kudos to her for making the effort.

good luck to her. after 35 years treating half of Iran's population as second class citizens it is about time.

When Iran is free from the criminal Islamic regime,women will be free to follow their dreams without a bunch of Islamic fascists telling them what to do or not to do. That day is going to arrive sooner than some fanboys of the IRI think.

Iran will be free, when western schizophrenic idiots will not mix politics and sports.

The recent western propaganda that the Sochi Olympics will be war zone for terror and a field of stray dogs, substandard services, corruption, mistreatment foreign workers building facilities, and a "waste" of public funds for "personal glorification of the dictator, Putin, can only be characterized as a schizophrenic one and born by insane systems of the world.

So far, focusing on the gay agenda doesn't work for the US performances at the Olympics........and the US olympic gays and others don't perform too well.

It's the "schizohrenic idiots" and their minions in occupied Iran who are mixing politics and sport with their ideological and religious nonsense.

Are you "second" yourself ??

From now, when Russia is winning the Islamic Republic is benefiting and winning too.

Russia has defeated not only the US propaganda, but also won the most medals and more gold and silver medals than the US.
Moreover. some of the other Olympic athletes abandoned citizenship of countries of the "Free World", including the US, and provided Russia with multiple gold medals....

There is a proverb "dogs .....are barking and the caravan is moving on......"
Looks like some people's logic and presence constitute and produce kind of barking.
Thanks to the Mat, who somehow unfortunately dissapeared from "the (author's) blog", the barking description fits well for characterizations of multiple "comments" posted on this website.

You must be incapable of rational conduct to think that if Russia is winning it would benefit Iran in any way. Russia has harmed Iran more than any other nation put together. Before you spew any further rubbish and diatribes against other posters please go and educate yourself by reading some history books regarding the Persian Russian wars and spare us your nonsense.