Khamenei: U.S. ‘Wouldn’t Hesitate’ to Topple Islamic Republic if It Could 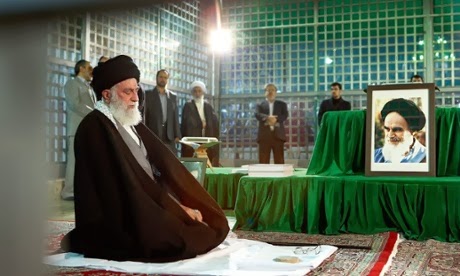 Iran’s Supreme Leader Ayatollah Ali Khamenei said today the United States “wouldn’t hesitate” to overthrow the Iranian government if it could, adding that Washington had a “controlling and meddlesome” attitude towards the Islamic Republic.

“American officials publicly say they do not seek regime change in Iran. That’s a lie. They wouldn’t hesitate a moment if they could do it,” said Ayatollah Khamenei in a speech to mark the 35th anniversary of the 1979 Islamic revolution. “Our stance toward the United States is due to its controlling and meddlesome attitude.” Khamenei added that the U.S. is the “archenemy” of the Islamic Republic. (Fars News Agency/The Guardian, 8 February)

During the speech, considered to be a major speech marking the anniversary of the revolution, Khamenei made no mention of talks between Iran and world powers over the country’s nuclear program or the interim Joint Plan of Action signed last November.

Khamenei also tried to downplay the effect of lifting of the sanctions.

“The solution to our economic problems is not looking out and having the sanctions lifted. My advice to our officials, as ever, is to rely on infinite indigenous potentials,” Khamenei said.

Olimzhon Adkhamovich Sadikov, described by the Treasury Department as an Iran-based Islamic Jihad Union facilitator who “operates there with the knowledge of Iranian authorities,” was designated for providing logistical support and funding to Al-Qaeda’s Iran-based network.

According to the Long War Journal, a respected counter-terrorism blog, the IJU is an offshoot of the Islamic Movement of Uzbekistan. Both groups are closely allied with Al-Qaeda.

Are you serious? "Iran is assisting key Al-Qaeda figures to transfer Sunni fighters into Syria". There is no point, while America and its clients Turkey, Saudi Arabia and Qatar are already doing exactly that.

YEs, USA did not hesitate to topple the Iranian Regime in 1979- since then we do not have an Iranian Regime anymore- the Islamic Regime is exactly what the US wants - sharlatan !

Such a butthurt regime, they refuse to let go of old miniscule grudges. Look at WW2: Japan, Germany, Italy and other countries had to endure extreme hardship and whose societies were destroyed and infrastructure became non existant, yet after the wars end those nations learned to live in harmony and peace with the US despite everything that happened. The Iranian regime thinks of itself as a special needs case. Iran will never be taken seriously so long as this regime is in occupation of the country. Khamenei is just living up to the pledge, constructed by that extremist grand daddy Khomeini, that enmity towards the US must be upheld therefor he continues on this crazed path of "Death to the USA" and gibberish of that sort.

Why previous article with Khamenei's photo, and his statements related to sanctions, has been missing from viewing as of today on this web site ??

http://www.youtube.com/watch?v=xPR554jCap8 --- How have economic sanctions impacted daily life in Iran?

GurneyFebruary 9, 2014 at 3:46 PM
Those countries were conquered,they exist now as semi independent nations so of course they will tow the us line,as for the us and iran,so long as the us tries to maintain its hegemony over the middle east and refuses to acknowledge the legitimacy of the iri then there really isnt very much to talk about now is there?,the us wants an iran that is no different to the arab puppet states,an iran that is just another "arab style dictatorship" as it was under the shah,you should really do some basic research into the recent history of iran before you write anymore posts,your ignorance on these issues is pretty obvious

Yes it is a rather hilarious piece of rubbish isnt it

It "is pretty obvious" your pathological diatribes reflects the type of ideological and noxious nonsense that you adhere too.

it's neither hilarious nor rubbish

Actually the corrupt mullahs suit the US and the west and they have no interest in real democratic "regime change" in Iran, Egypt or Saudi Arabia. Despotic regimes suit US agenda and the mullahs keep Iran isolated and backward. Iran is country of huge potential if it had a democratic and nationalistic government. The Shah was trying to create a modern, independent and powerful Iran and we all know how that experiment ended. The mullahs are a dream come true for the west as Iran has never seen such widespread corruption in its entire history. The mullahs fleece the money, brainwash the Iranian population with isolation and crude propaganda and keep Iran weak. What else could the US and the west ask for?

You keep telling yourself that, Anon 2:01 PM.

AnonymousFebruary 10, 2014 at 2:01 PM
So which part of this is true then? and why on earth would iran help sunni terrorists to overthrow an allied government,its like saying the us was transferring taliban fighters into pakistan to help overthrow the pakistani government or that it was transferring al qaida terrorists into western europe,it makes absolutely no sense,in fact it is so absurd that it is hilarious and its also complete rubbish

I agree with you. But look out for those brainwashed automatons that flood these pages with their usual hateful propaganda.

You're clutching at straws, Anonymous February 11, 2014 at 1:20 AM. The so-called "opposition" (mass murdering terrorists) have already discredited themselves by getting involved with the Al-Qaeda groups.

In that case, the article doesn't state that the Supreme Leader, in his speach to the Air Force personel, has pronounced, that the Islamic Republic is not going to .......decrease its defense capabilities.......

Maybe the israel should disarm itself first, especially from its nuclear weapons and other nuclear and military capacities............

Khamenei the leader of gang of arsonists of Cinema Rex in Abadan that burned over 400 innocent men women and children to death.

What are your gangs of arsonists?

Are your gangs, which destroyed Iranian jetliner over the Persian Gulf with innocent women and chidren, or those who kill innocent Palestinian women and children in their camps ?

Is that your gang that kills Iranian scientists too ??

What a typical basiji propagandist. Trying very hard to justify your leaders actions with your impudent remark regarding the 400 murdered victims by Khameini's arsonists. Since you brought those subjects up. As an Iranian citizen I condemn any act which is harmful against any other citizen in this world. But you refuse to even except or condemn Khameini the arsonist leader as the instigator of that terrorist act by defending his actions.

Anonymous February 13, 2014 at 9:50 AM, "Since you brought those subjects up", can you provide some evidence for your claim about Khamenei?