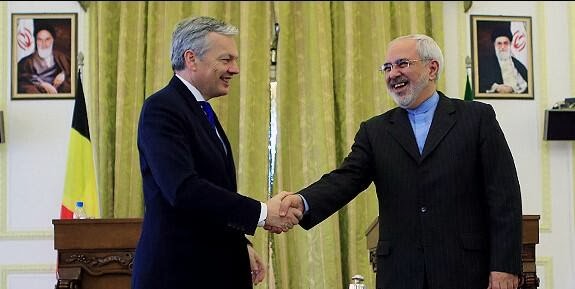 Belgian Foreign Minister Didier Reynders arrived in Tehran today and held talks with his Iranian counterpart Javad Zarif and the Iranian President Hassan Rouhani. He told reporters that Iran's nuclear negotiations with world powers could lead to the restoration of trust between Tehran and the West.

“I hope relationships that are based on trust will be revived with the nuclear negotiations and when a clear, final agreement is reached,” Reynders said in a joint press conference with Zarif. (eubusiness.com)

Reynders is the third foreign minister from the European Union to visit Iran in the past two months, following in the footsteps of Italy's Emma Bonino and Sweden's Carl Bildt.

Zarif, for his part, expressed optimism for better economic cooperation with Europe.

“Our European friends should know that a good atmosphere and stable conditions have been created for investment in Iran,” Zarif said. (Fars News Agency/eubusiness, 23 February)

Reynders said he also discussed human rights in talks with Iranian officials, which included "the death penalty, freedom of speech and women rights."

“On all these issues, we want an open dialogue,” he said.

He also announced, without providing details, that the European Union's special representative for human rights Stavros Lambrinidis would visit Iran.

Reynders also said Iran should be part of a political solution to the conflict Syria -- where it is a key ally of President Bashar al-Assad's regime.

I don't understand the point of inviting these third rate European diplomats. What polish, swedish or for that matter beligian foreigh ministers can influence. These countries are not even on the map so to speak.

I like this topic. I want know some helpful things from this side. It is one of the best post from other. It is a useful and charming post. It is extremely helpful for me.
USA property investing