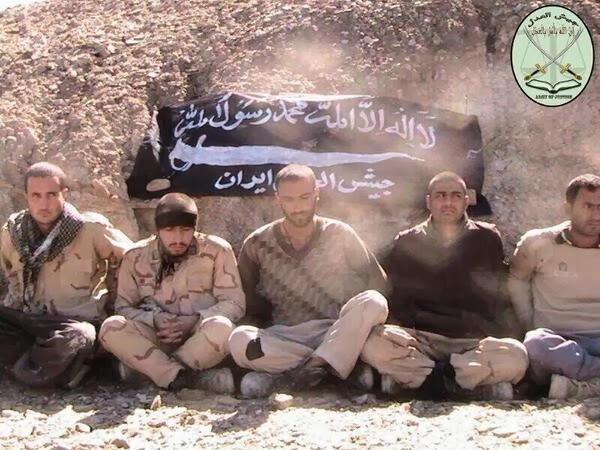 The Baluch militant group Jaish ul-Adl of Iran (“Army of Justice of Iran”), the apparent successor to Jundullah, today took responsibility for kidnapping five Iranian border guards by posting a group photo of them on their Twitter account.

Last October, Jaish ul-Adl attacked a border post killing 14 border guards and injuring six. Three other guards were ambushed in another terrorist attack by the group.

Photo credit: Iranian border guards kidnapped by Jaish ul-Adl, presumably in Pakistani side of Baluchistan. (pic.twitter.com/DBAeR59YVY)
Posted by Nader Uskowi at 10:00 AM

I hope those soldiers are freed soon, but when events like this happen, it really calls into question all those statements coming out from the various military leaders in Iran regarding their response to any hypothetical US aggression. How are they to be taken seriously when a ragtag group can do this on their own border. Instead of sending "warships" to the Atlantic for show, strengthen your border, it isn't as if this is the first such occurrence in that lawless region.

Iran needs to seal its border with the Wahhabi sponsored Pakistani terrorist state that is openly supporting anti-Iran terrorists from Baluchistan. The greatest threat to Iran is from the failed Pakistani state and the moronic mullahs have been appeasing the begging bowl Pakista with aid and promises of illusionary "pipelines" rather than completely sealing the 750 kms border and installing forts, sensors, drones and earth barriers. The terrain in Sistan/Baluchistan is mostly flat and creating earth barriers like berms and ditches is relatively inexpensive. Iran really needs to take its national security seriously. Not a single person or truck should be allowed to enter Iran from Pakistan under the chaotic government there releases the kidnapped border guards and dismantles the Wahhabi terrorist bases operating openly at Nuski, Chaman and Gwader. The MKO terrorists even operates from Pakistani occupied Baluchistan.

Iran should simply adopt the US tactic of drone attacks against terrorist targets and also grow a goddamn spine just as the US did. Carpet bomb those recruitment and training camps inside Pakistan. The authorities in Pakistan shouldn't object since terrorism poses a very real danger to their government as well. There is no playing Mr. nice guy with these cockroaches. Iranian government need to grow a pair and send a very powerful message to those terrorists; from here on out Iran won't take crap from vermin and won't negotiate with vermin and if you mess with us, we will extinguish you.

My thoughts and sympathy are with these unfortunate fellow Iranians and their families who were there to do a job - some probably conscripted soldiers. I partially share some of the sentiments expressed by the previous commentators. Pakistani officials, politicians and army generals are too corrupt, too unreliable and well known for their double-dealings to be considered as a regional partner.

" Iran should simply adopt the US tactic of drone attacks against terrorist targets and also grow a goddamn spine just as the US did. Carpet bomb those recruitment and training camps inside Pakistan."

not such a good idea. iran wouldn't get the permission of the Pakistani government for that........ and if the Pakistani military fought back against Iran, Iran probably would get the worst of the fighting.

Iran is militarily not as strong as even Pakistan.

And they send three rust buckets to the Atlantic ocean.

You are serious? Pakistani or Indians fighting? Among all the nations these two are real pussies so to speak. They are born to be slave as British know them well. They have no bottle to fight.

In reality the devious mullahs have made a mockery of Iran by these counterproductive publicity stunts to fool the mostly ignorant domestic population and expose Iran as a laughing stock internationally. Militarily, Iran is quite weak and vulnerable as can be seen by repeated terrorist attempts from Pakistan, assassination of its scientists by Zionists and the rapidly aging military that has 1960's vintage tanks (most are inoperable), 70's era aircraft and frigates, pushing way past their expiry date or functional life cycle.

In the 1970's Iran had the robust military capability to more than handle these terrorist attempts as the Shah has dispatched Iranian AH-1J Cobras and CH-47 Chinooks with a brigade of Special Forces to hunt down the Baluchi terrorists in Pakistan from 1973-75. The Iranians also acquitted themselves well in hunting the Dhofari rebels in Oman in 1972-1974. Today, despite all the rantings of the corrupt mullahs and their minions, the fact is that Iran is unable to secure its 750kms mostly sparesely populated, barren and flat border with terror-central Pakistan. In the 1970s and 80s Morocco had a similar problem with POLISARIO rebels in western Sahara (after Spanish withdrawal) and despite having a fraction of the financial or human resources of energy rich Iran, King Hassan was able to secure the whole western Sahara border from the Moroccan border near El-Farcia to the Mauritanian frontier in the south near Techla. The cash strapped Morocco military was able to successfully build a 2000 kms long earthen wall complete with sensors, spaced military forts, minefields, surveillance cameras backed by a helicopter and armor rapid deployment force. One has to beg the question why Iran can not do the same?. While on the eastern flank, India with a much more sophisticated and larger military was able to compete a high-tech border wall with Pakistan all the way from Kashmir to the Rann of Katch (Arabian Sea) within one year traversing very rough terrain of over 2500 kms. If Iran is to take its national security seriously there is no other option but to secure the lawless Afghan and Pakistani borders that are breeding grounds for Saudi sponsored Wahhabi terrorists and assorted enemies of Iran. The only and greatest threat to Iranian national security emanates from the failed Pakistani violent terrorist state that is infested with Wahhabi madrassas, 200 million dirt poor and easily manipulated population and thousands of brainwashed hate-filled terrorists in the service of foreign intelligence agencies including the barbaric Taliban.

I'm quite serious and they fight every bit as well as Iranians and have far better equipment with which to fight.

"mostly ignorant domestic population". With that, you have invalidated your entire post by exposing yourself as a racist shill http://demotivationalpost.com/demotivators/12340232460/internet-racists.jpg

How is the post racist or any element of "racism" involved? It is based on the obvious fact the vile and corrupt mullahs have made a mockery of Iran and its isolated and brainwashed population. Iran is the North Korea of the middle-east where the idiotic mullah propaganda machine has simply kept the 78 million Iranians ignorant, feed them totally crap propaganda on imaginary "Iranian achievements" like "space program', non-existent "weapons", all kinds of "medical research and cures", and the list goes on. Iranian educational system is total third world hogwash and the media is totally controlled and censored. Reecently, the mullahs stole over $18 billion in gold bullion via their AKP buddies in Turkey. The fact that Iran had to open up its nuclear program speaks volumes about the weakness of Iran and its inability to face the western sanctions. Iranians are being killed daily in Syria, Pakistan border and by Zionist assassination teams and all you have to offer is childish Basiji internet links. Grow-up and face the fact that most Iranians want to flee the flea ridden mullahcracy and over 6 million have already done so. Why do think Iranians are risking their lives and that of their families to escape the mullah hell-hole in rickety boats in Mediterranean and even as far as Australia. The reality is really hard to swallow in a closed dying society built on Islamofascist lies fanned by the most corrupt system on earth.

@- A man who suffers from an attitude of inferiority and bigotry deserves contempt .

@-that some officials engage in corrupt activities does not make the whole country an ignorant population.

@-it is very sad and hilarious at the same time how the regime manages to fool and keep the Nation of 80 million ignorant,by feeding them with propaganda on phoney claims on scientific achievements....!.-BUT the good news is that your single brain can easily outweigh the brains of 80 millions people on a scale hence your justification in your insults.

so the reality is not hard to swallow that your anti Islam fascism and lies on the establishment is fanned by bigotry and a dismissive attitude emanating from a devilish sense of self righteousness ,biased analysis and some pinch of self hating racism.Had you any principle you would show it by mentioning the benefits of opening up to the west,being accountable,transparency in the whole nuclear program,so as to have the sanctions lifted!. you would go further in encouraging the establishment to speed up the process and point to the many benefits of free trade with the world against the secretive nuclear program at the expense of the masses.

-only a brainwashed zombie showing some clumsy patriotism and 'overflowing love for his country' can mock the Government as ' being weak by opening up its nuclear program and that it is unable to face the sanctions'!!.

AnonymousFebruary 11, 2014 at 6:11 PM
"The fact that Iran had to open up its nuclear program"
Irans nuclear program was already open,it was the west who had to back down and accept iranian enrichment,and why should iran squander vast sums building border walls against such a limited and insignificant threat,the best way to deal with them is through drone strikes,so long as one is discrete about it and does not rub the pakistanis noses in it

Yes dear, we have been hearing this same Basiji lame propaganda for the past 35 years, keep the moft khor tirades in defence of on the indefensible mad fleecing mullahs.

American operators on the drone strikes that result in the deaths of innocent people.