Kerry and Zarif Meet in Munich 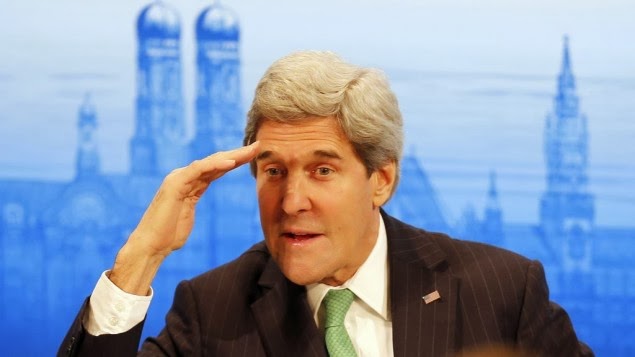 “(Kerry and Zarif) discussed the upcoming negotiations with the P5+1 and the EU on a comprehensive agreement that will begin in Vienna next month,” a senior US State Department official said. “Kerry reiterated the importance of both sides negotiating in good faith and Iran abiding by its commitments under the Joint Plan of Action (agreed in November),” said the official. (AP, 2 February)

“Kerry also made clear that the United States will continue to enforce existing sanctions,” the State Department official added.

Fars did not say which parts of the published reports were imprecise or unconfirmed.

The most important comment made to the press by either man:

Zarif told the panel "it would be a major mistake for our friends to believe that we are here because sanctions have been effective."

I don't believe Fars News Agency was referring to the effectiveness of sanctions, or lack of. It said the published report on the content of meeting, that is what the State Department has said about the meeting, was imprecise or unconfirmed.

I read the State's report, and I am not sure what Fars is referring to. The only reference to sanctions was Kerry's point that the current sanctions will continue until a final agreement is reached. This is a self-evident statement.

Anyways, no matter what people think about the effectiveness of the sanctions, the reality is the two sides signed an interim agreement and are expected to strike a final comprehensive deal within 6 months or so. That's the greatest development in Iran-West relations in longest time.

By considering the huge gap between two sides positions, I highly doubt any such agreement could ever be signed.

And what are the huge differences? The main outline of any final agreement was already agreed upon in geneva. The Islamic Republic (Nezam) may have decided to close the nuclear file and get on with other issues facing the country.

Kerry looks like he has had cosmetic surgery. Completely unnatural. Has anyone else noticed this?

A comprehensive agreement between Iran and the West would be historic, a strategic decision by the Islamic Republic not to let its nuclear program to prevent its re-integration into global market/banking system, and recognition of Iran's rights by the West. Number of centrifuges would not stop the deal, notwithstanding the current political posturing.

Nader UskowiFebruary 2, 2014 at 10:34 PM
It wasnt the iri who was playing games with the closure of the "nuclear file",that dubious privilege belonged entirely to the west as I`m sure you know

It is abundantly clear that the west has not officially recognised and still refuses to recognise irans nuclear rights,it still for instance tries to deny that iran has the right to enrich,it is quite apparent that the only iranian nuclear program that it is willing to tolerate would be one that it had control of and a veto over,I for one am very pessimistic over any possibility of a long term deal as it would require a 180 degree turn about face from the west,not totally impossible but not very likely either.I think the best deal on offer would be a continuation of the current deal

How can you take seriously, someone who would do that to themselves?