Nasrallah: Hezbollah Will Fight On in Syria 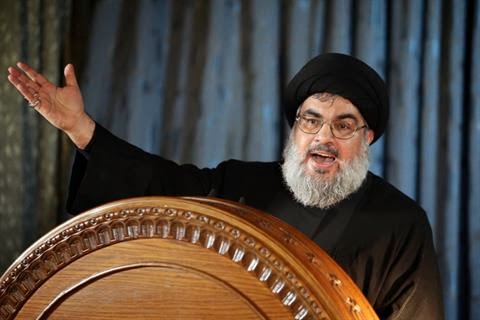 Hezbollah chief Hassan Nasrallah said Sunday during a televised speech that his party would fight on in Syria.

“I will not repeat what I explained before about the reason we went to Syria and why we are staying where we should be,” Nasrallah said. (The Daily Star, 17 February)

Nasrallah warned that Sunni extremist groups posed a threat to the entire region and that all of Lebanon was a target.

“Lebanon is targeted by these takfiri groups and they would have come sooner or later regardless of our involvement in Syria,” he said, in an apparent response to his Lebanese critics that his military intervention in Syria has caused a rash of suicide bombing in Lebanon.

The Hezbollah chief, whose group has been fighting alongside the Assad's military and militias in Syria, warned that if extremists gain control of war-torn Syria, the repercussions would be felt throughout the Middle East.

Note: Nasrallah did not say what repercussions would be felt in Syria if Assad continues his rule. His defense of Hezbollah’s military intervention in Syria sounds more like an ideological argument that political. The Hezbollah, along with other extremist Shia militia groups, under the tutelage of Iran’s Quds Force, is seen as defenders of the Shia faith anywhere in the region, giving it the license to intervene militarily in foreign countries.

Nasrallah uses the word “takfiri” to lump all the opposition groups, including the moderates, under same category to justify Hezbollah’s assault on Sunni groups in general, an ideological justification very much like the anti-Communist ideology of a previous era to crush the democratic movements in many pro-Western countries.

No 1 Iran hater Nader. Are you kidding me! You act like the Syrian civil war is about democracy. The supporters of your moderate rebels who are they? Who has been financing all the car bombs and suicide bombers, Iran, Hezbollah? The support the Saudis, Qataris (wonderful paragons of democracy) and turkey have been giving so far, is it to promote democracy? what have they been doing so far. Pumping more and more money and weapons into the arms of the democracy lovers. Since the last Geneva conference what have they done to bring peace? The Saudis are sending MANPADS to your democracy lovers, but im sure you already know that. Tell me who has been fueling this conflict for so long Iran, Hezbollah? Should they turn a blind eye as turkey and jordan allow the territory to be used to funnel legions of rebels from all over the world to smash Syria and later Lebanon.
No my brother in this conflict the SAA, Iran and Hezbollah are on the side of right and justice. STOP acting like this is an equal conflict with a balanced amount of blame on both sides. There is only one side prolonging this conflict, and it isn't the Iran side. Wont hold my for you to become more honest about this conflict, but this needs to be said.

Perhaps a more formal definition of "takfiri" would be helpful here:

A Takfiri (from Arabic: تكفيري‎ takfīrī) is a Muslim who accuses another Muslim of apostasy. The accusation itself is called takfir, derived from the word kafir (infidel) and is described as when "... one who is, or claims to be, a Muslim is declared impure."

In our own Western parlance, we refer to these Salafist extremists as "Jihadists."

I'm a bit confused, Nader. Are you saying this term is employed in a similar manner as a number of our former American allies in the global south (referred to in those days as "Third World") used "anti-communist" in efforts to gain support from USA during the Cold War?

Pyruz is right when Nasrallah says takfiri he is referring to salafis/wahabis so in fact hes not putting all opposition under one umberella but he says takfiris to keep unity amongst salafis (small minority of salafis are not takfiris). Salafis are known to be more hateful/aggressive towards shia than Jews and they are intolerant to all other religions including sunnis (refer to many religious sites and followers attacked by wahabis in the civil war). So it is very reasonable to assume the movement has a strong takfiri influence and in a situation that theyll overthrow Assad they would most likley (99%) attack south lebanon and all other religious followers would suffer as a result in syria as well (refer to Somalia, Pakistan, Afghanistan.....).

By saying the civil war in Syria is between Assad and "takfiris," he is labeling all Sunni and secular opposition group as "takfiri" to justify his military intervention in a neighboring Muslim country. A tactic like in the Third World, that rulers used to refer to the opposition as Communist to justify their dictatorship.

In the revolutionary Iran of early years, the extremist Shias referred to the opposition members were referred as "Mahareb" (Enemies of God)!

How the hell can the most barbarous regime in Iran's history be on the side of "right and justice"?

But he didnt say the war is between Assad and takfiris, he said he got involved because of takfiris. Anyone who is aware of the situation knows that the takfiris are an influential opposition group and even if Assad was to be overthrown the takfiris will have a lot of power, the least in some cities. This is a big danger to not only Lebanese shias but Syrian and Lebanese non-salafi population as well.

Even the west recognizes the dangers of takfiris influence in Syria, so Nasrallahs move is very reasonable and your criticism is unjustified.

Whatever the Iranian government is, the so-called "opposition" of foreign, al qaeda groups in Syria have made it perfectly clear that they are even worse and want to be the taliban of the Arab world.

The existence of Sunni extremist organizations, like ISIS and Nusra, in the Syrian civil war is recognized by all, as are the existence of Shia extremist militias, trans-national and mainly Iraqis, and the Hezbollah itself. This blogger has argued that Assad’s military response to peaceful demonstrations of 2009 paved the way for the extremists to find their space and fighting them with equally extremist organizations like Hezbollah is not the solution.

Whatever the Iranian government is or any other regime in Iran it's no business of ours to meddle in other countries internal affairs.Iran has enough problems of its own without trying to be the gendarme of other countries in the middle east. Let them sort their own mess up because we don't need it.

What a rotten terrorist thug!

It will be your business when depleted uranium JDAMS start dropping on Tehran. The road to Tehran begins in Damascus. Syria and Hezbollah are Iran's strategic depth, response and deterrent to an Israeli attack. If Syria and Hezbollah fall count the months till Iran is bombed back into the stone age. The shahab 3's will not do jack. I know all the Iran haters and IDF sponsored trolls would love that, but to act like this is some clinical straight forward revolution for democracy is a total JOKE. This is a Saudi Israel and US attack with Iran squarely in focus.

AnonymousFebruary 17, 2014 at 2:35 PM
When you have groups of saudi and gulf arab backed terrorists trying to overthrow an allied government then you have no choice but to get involved,to try and pretend that this has nothing to do with iran is stupid

Uskowi-
You are permanently siteth at the wrong side of the road on the whole issue of Syrian civil war.

-you are perpetually bemoaning Assad's 'military response to peaceful demonstration ' but wont you lean that extremists and Al Qaida will pounce on any weak Government anywhere in the Muslim world!.It is a matter of a waiting game.what guarantee then do you have on the democratic opposition that they would form a stable Government that would be devoid of sectarian strife WITH Assad out of the scene.

He IS not rotten, not a terrorist and neither a thug -BUT A Seyyid .A PRACTICING Muslim subduing himself to will of His creator.And what are you ?-pork eating denizen whom no law no ethics no custom can stop you!.

Anon 2:35 PM, maybe so but, that can equally be said of the zionist occupation, the American government and its client states in the middle east. It is no business of theirs to meddle in the internal affairs of other countries, including Syria, by supporting al qaeda terrorists there. They have enough problems of their own without trying to be the police of the world.

Typical IRI Groupie trying to scare Iranians into thinking the "zionists" will attack Iran with depleted uranium JDAMS ! The jokes on all the mullah loving IRI Groupie with their wild fairy stories and spewing out their retarded diatribes on the Iranian population. The real terrorists are the ones occupying Iran.

In that case, the IRI is not the only terrorists. The world has clearly seen the zionist occupation use experimental and toxic weapons on civilians. hasbara internet shills cannot hide that truth.

He is all those and more. Rather eat pork and drink beer than order the killing of innocent human beings. That is true "ethics",not some pretentious man in religious garb.

You mean like the "ethics" of Guantanamo Bay, drone attacks, use of experimental and toxic weapons and waging wars around the world? Some "ethics"!

OH ! ethics of same sex marriages,igniting wars everywhere to keep defense industries busy , and all said by bro Anon feb 19 at 8:06am-and then you die an enemy of your creator having rebelled against him in this world dying a hapless death cursed by all creatures.
Eating or doing that which is forbidden by the Holly books is rudeness and abstaining is a sign of respect and submission.-you talk of 'killing innocent lives ' but do you have the guts to research on who manufactures those suicide bombs?.who makes those vests of explosives?, who cries all the way to the bank if a suicide bomber purchases his tools of trade?.IF per chance Muslims live in peace for at least five years- i mean no wars in Africa or anywhere in the Muslim world-do you think the West or all those arms producing Nation would rejoice?.

so the Seyyid is a humble religious man only resisting evil from the other side of the border!!.

As a matter of fact,I'm going to spend it on a brand new sty for all the IRI Groupies.The other enclosure was overflowing. Nevertheless,I appreciate your concern Anon 11:48 pm.

As an Iranian,I'm more concerned about my country being used as a cash cow by Arab terrorists. Go and troll on someone else.

Anon 3:07 PM mentioning trolling and portraying themselves as an Iranian. Interesting, considering what the hasbara shills like to do.

Technique 5 from the hasbara Campus Manual:

Plain folks: The plain folks technique attempts to convince the listener that the speaker is a 'regular guy', who is trust-worthy because the are like 'you or me'.