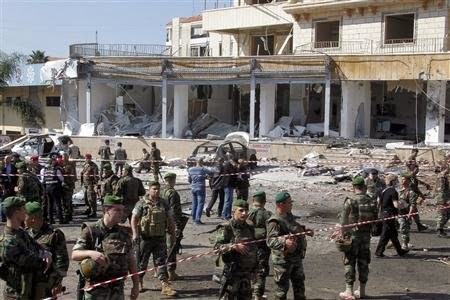 Lebanese security forces have detained whom they claim to be the Sunni militant suspected of recruiting suicide bombers and assembling car bombs used in the suicide bombings near Iranian cultural center in Beirut and an earlier suicide bombing at the gate of the nearby Iranian embassy, Reuters reported today.

The security forces said Hassan Abu Afleh, arrested in Beirut, is suspected of being a leading figure in the Abdullah Azzam Brigades, the group that claimed responsibility for Wednesday's twin suicide attack near the Iranian cultural center that killed eight people. The same group said it was behind an attack in November on the Iranian embassy.

File photo: Lebanese soldiers secure the area near the Iranian cultural center at the site of an explosion in the southern suburbs of Beirut, 19 February 2014. (Sharif Karim/Reuters)

Lets hope, he will not be killed by the Mossad or Kingdom of "clowns".

they may as usual kill him and cook a story on him.