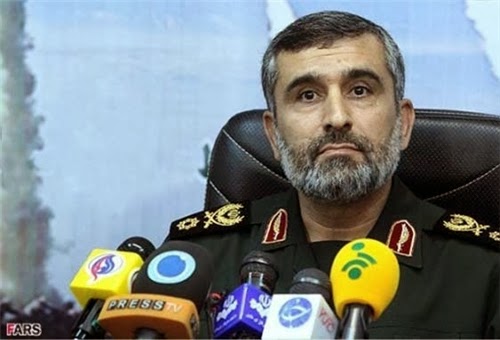 Commander of IRGC Aerospace Force Brig. Gen. Amir Ali Hajizadeh said in Mashhad today that the warnings issued by the Iranian supreme leader about Iran’s crushing response to any possible Israeli attack on nuclear facilities would mean that the Iranian armed forces will reciprocated with a “destructive response,” Fars News Agency reported.

“The remarks of our master (Supreme Leader Khamenei) about Iran's response to the Zionist regime is the yardstick for our action and if the Zionists make a mistake, this (warning) will certainly take place, and the reason why they haven’t yet embarked on such a move lies in their fear of Iran’s capability and power,” Gen. Hajizadeh said.

There is no question that in an unlimited war Iran with 80 million people and a mass mountainous landmass of 1.64 million sq kilometers will simply wear down the Zionists who simply can not afford indefinite mobilization of an US aid based economy. Egypt has similar strategic mass and that is why the US bought the Egyptian military in 1980 to neutralize that threat. A high tech military is only good for short term tactical conflict, and as Iraq and Afghanistan, not to mention Korea and Vietnam has shown a large determined opponent will eventually prevail over a high tech military by getting them bogged down in a merciless war of attrition. The Chinese military strategist Sun Tzu called it a "death by thousand cuts". 5 million Zionists jam packed in a 15 kms wide coastal strip in Occupied Palestine are easy pickings for any determined foe. The whole area and population is 3 times smaller than metro-Tehran.

There are 16 active airbases in the small Occupied Palestine region and even long range artillery with base bleed ammunition from Lebanon and Syria can shut down the Zionist airforce. Iran has land assets now in Lebanon and Syria and the response indeed will be devastating. The fact is that 99% of the Zionist population has foreign passports and they will pack up and run as they did in 2006 when Hezbollah merely used 122 grads. Iran has a much heavier punch.

such a blindingly idiotic analysis......

the Israelis aren't going to invade Iran or engage in a protracted war with Iran. if anything, israel would attempt to blow up some weapons development site and then simply cease fire.

if iran responds by having missiles fired at israel's population centers. Israel will bomb some more stuff. If Iran actually kills a bunch of Israeli civilians minding there own business in Israeli cities, then perhaps israel will blow up a bunch of Tehran or simply flatten Iran's big city.

but the Israelis certainly aren't going to invade Iran.

Anon 10:34 , and how exactly are the Israelis going to "blow up some big iranian city" ? Short of resorting to nuclear weapons of which they have plenty of course. I wish them good luck with that. Specially when we know that at most they can mobilize like 80 planes and half of that in an air to ground configuration because of a limited tanker fleet, a mass barely enough to hypothetically deal with all of Iran's dispersed nuclear facilities let alone with significant projected losses. Actually one of the major, persisting stumblings blocks for its military brass to go it alone and push for Uncle Sam's involvment instead despite more than 10 years of empty saber rattling now. Oh, and for your info, things have changed in iran too during those same 10 years, and the country's ballistic arsenal has grown in precision and increased in numbers (if you doubt my words then you'll want to check Uzi Rubin, IDF's Arrow program founder, and Leon Panetta talking about it) enough to cripple if not outright devastate every single zones of industrial concentration in a country virtually devoid of any credible strategic depht that can't possibly wistand several hundreds of missiles being fires in salvos of dozens, ABM or not Israel will take countless deadly hits in the process, that is also what made their commander think twice before letting Netanyahu move forward with his unilateral plans in striking Iran. Fortunatly it wasn't up to you to pull the strings that day. Iran has built enpugh launchers , silos and produced and stacked up enough solid fuel MRBMs now that it poses a credible deterrent to scare off any single regional competitor in a one-on-one confrontation for the foreseeable future.No coalition = no Iran strike. It simply won't happen, get your facts right and get over it already.

By bombing it with their air force

That is a logical deduction which some the the hasbara brigade don't want to accept fats out of sheer bluster. Even the Pentagon war-gaming scenario has warned the Zionists that in a conventional missile and artillery war with Iran and Hezbollah they will be destroyed. People should not forget that Iran has a defacto border via Syria and Lebanon and even perhaps Gaza with the hot air Zionist entity in Occupied Palestine. The Zionist bluff has failed and they know it. Mark had posted an Iranian missile strike animated scenario of Tel Aviv and it is quite realistic as the Azrael Tower will be first to go. The Zionist airforce simply does not the range with their F-16I to loiter over Iran, face the SAMS and swarms of interceptors defending the home soil and be able to do much. It is no coincidence that the barking Zionists have finally shut the hell up.

AnonymousFebruary 16, 2014 at 9:50 PM
"That is a logical deduction which some the the hasbara brigade don't want to accept fats out of sheer bluster. Even the Pentagon war-gaming scenario has warned the Zionists that in a conventional missile and artillery war with Iran and Hezbollah they will be destroyed."

Say what you want about Zionists but at least they're honest enough to join the military they propogandize unlike Iranians who sit in the west and their greatest nightmare would be actually having to fight in the military whose capabilities they constantly exaggerate.

Israel had bombed Syria and Lebanon whenever it wishes without losing a single plane and it will do the same to Iran, at which point Iranians will no longer bs about their abilities but rather cry to the press about Israeli brutality against their meager and pathetic defenses.


LoL. Errrrr... ok. Not enough bombs to deal with the whole of Iran's nuclear infrastructure by their own admission, but still they can level up AN ENTIRE CITY with that same air force and available ordnance. With a little luck maybe !!!! Yes, I should have thought of that, thanks for enlightening me in such an efficient way.

There is no need to bomb anything. The Islamic regime is its own worst enemy.

Politically, economically and morally you mean ? yes absolutely, I agree myself. But then we are changing the subject of this discussion and blog page altogether. The above was meant to show the ludicrous nature of some empty claims concerning the balance of power between Iran and Israel. You want to talk about the countless abuses of the IRI against its own citizens, well I'll be first in line to accompany you all the way, sir. A lot of instant examples come to my mind as I write these lines. But in my humbler opinion, this exchange is not the place for it, nor is your reply a valid answer to the above counterclaims about a hypothetical capacity of the IDF to literally wipe Tehran off the surface of Iran. Bring a technical argument to that and then there's be matter to discuss further. If not, meet you somewhere else on this blog !