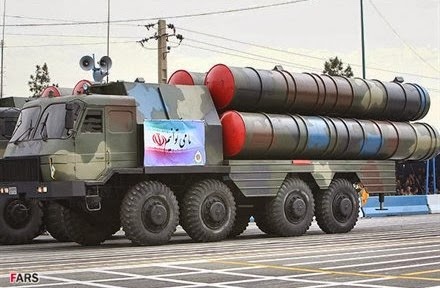 “The infrastructure for manufacturing the Bavar-373 missile defense system is prepared and the bottlenecks in the project have been removed,” Iran’s state-run Press TV quoted Gen. Esmaili as saying.

Esmaili added that the system is expected to become operational by March 2016, and encompasses technology that is “more advanced” than the Russian S-300. The system is designed to intercept ballistic and cruise missiles and other airborne targets.

“We hope that by the end of the plan, we will see a very good system with more capabilities than S-300 join [the country’s] Air Defense system,” said Gen. Esmaili. (Press TV, 15 February)

File photo: Fars News Agency. The banner reads: "We Can!"

So from March 2013, to March 2014, to March 2015 to March 2016? Anyone still believes these propaganda stunts? Like the most-advanced fighter jet, Qaher, they so-called build? Its all a joke.

Iran is still hoping to get the inferior Antei 2500 System from Russia and this claim is based on that misplaced hope. Iran is incapable of developing or fielding any complex SAM system on its own as most knowledgeable commentators regularly post here. Iran has upgraded some US HAWK and Russian SA-2 systems (S-200) with North Korean help but that is all.

Russia has reportedly offered a new type of air defence system to Iran as a substitute for the S-300 surface-air-missile (SAM) systems the country was originally scheduled to supply as part of an $800m contract signed in 2007.

The proposal includes the Antei-2500 anti-ballistic missile system, which is capable of intercepting up to 24 aircraft within a range of 200km or 16 ballistic missiles simultaneously, Kommersant has reported, citing unnamed officials in the Russian arms trade industry.

The officials did not, however, provide further information about the offer, which represents Moscow's second attempt to bypass a $4bn lawsuit filed by Tehran in the Geneva International Court of Justice over cancellation of the contract in April 2011.

and how many years you worked for Iran defense industries?

AnonymousFebruary 15, 2014 at 9:45 PM
There are so many errors in your post its just not funny,iran doesnt need the dprks help to upgrade any of its air defences its more than capable of doing that itself,in addition the dprk doesnt use the mainly western based sams that iran uses and would have little to no experience experience with them,if iran was going to acquire anything from the dprk it would have been their newest sam system.There is nothing inferior about the Antei 2500,its actually superior in several areas to the s300 pmu1 that iran originally tried to purchase.Iran has done a lot more than just upgrade its hawks and s200s,which are not sa2 they are sa5,its also produced the raad and the Sayyad 2 as well as upgraded the crotale/hq7.Next time do a little research before you post that way you wont embarrass yourself

Well, what about all the publicly acknowledged improvements of existing systems such as the re-engineered/upgraded Crotale/FM-90 with visible new radar, optronics and command center elements ? Or the Iranian version of the Russian Buk, the Ra'ad, that shares similarities as well as subtle homegrown differences with the latter, with a radar system yet to be unveiled to the media, by DIO's own and deliberate admission ? what about the Sayyad-2 which has been seen as a valid derivative of the SM-2 missile included in the Patriot and still the core design used in every ABM system in NATO by those same "knowledgeable commentators" including the reference defense publishers "Jane's" ?

Jeez, as said above, next time you want to bash Iran's military prowess at least care to do some research before coming here and spitting your belittling remarks, embarrassing yourself all the way to the ground... same applies for Anon 7:44 PM, Iran unveiled and started mass-production of no less than 4 systems since 2010 : the Mersad and the Ra'ad medium range SAM system, the Crotale short range missile system (named the Herz-9 in Iranian defense designation) and the Sayyad-2 medium to long range ABM system. Now who cares they admit some delay in unveiling the crown jewel of their defense development ? at most they never said anything about deployment but rather the public unveiling of PROTOTYPES, which they apparently decided not to show for now, following the new administration's trend in downgrading the aggressive, fiery and triumphant tone of every military event that were a trademark of Ahmadinejad, and rather opting for low-key, sobre, technical presentation of their new assets, with the "Barani" cluster-warhead ballistic missile being the latest example last week. Integrity of the nuclear negotiations remain the focus of their multi-faceted strategy of global appeasement, and with reason in my opinion.

Anyway, didn't Israel delay twice its Arrow-3 already since 2013 ? it was supposed to be mass produced and deployed by now, instead an "unspecified major flaw" prevented a test last year and postponed the projected deployment date to 2015... how about you start pointing out their propaganda for a change and not exclusively and systematically stick to Iran's ? of course both sides will inflate their capabilities many folds in every PR occasion, that's part of every country's psychological warfare, same goes for the F-35, 2,500 units supposed to be up and flying today, less than 100 defective and repeatedly grounded units actually in existence and two program CEOs fired from Lockeed... there is the theoretical ideal, and then there is reality, the rule applies for everyone.

Usual Basiji rants not withstanding, Iran under the pathological exaggerating mullahs could not match Bahrain in terms of high-tech weaponry.

What's with all the Arabic names? Farsi does not cut it anymore in Iran?

AnonymousFebruary 16, 2014 at 6:25 PM
Last time I looked bahrain had nothing like irans indigenous weapons industry,just like the saudis they were almost entirely dependent on other nations not only for their weapons but even for the technicians and engineers to maintain those weapons,indeed the bahrainis proved so useless militarily that the saudis had to invade in order to crush a peaceful protest/revolution.The only people ranting here are the malcontents like yourself

Well the US build advanced hardware without even winning in Afghansitan or Iraq... Maybe your whole army is a joke...

Well how about that : Usual pro-western propagandists not withstanding, Bahrain would do better than to provoke Iran in sending several hundred MRBMs and an even larger number of SRBMs and start destroying its F-16s on the ground. Bahrain's close proximity with Iran basically means it is exposed to thousands of assets of varying payloads and ranges, it makes its situation in an open confrontation with Iran even worse than Israel, since in addition it has even less strategic depth to defends its ONLY strategic airbase. Your hate of anything Iranian and blind, unconditional love and fascination for some alleged overwhelming GCC/Israeli superiority over Iran is laughable at best.

Iran has a recognized, mature defense industry and is now able to re-engineer/copy/upgrade anything it needs short of being able to build fighter planes, the last stumbling block before it can be considered totally self-sufficient, and we will see it coming in the next 10 years. By contrast, Bahrain cannot produce a bullet of its own and most of its "high-tech equipment" is manned by foreign operators, its planes flown by mercenary pilots, so good luck to them in sustaining a war of attrition with Iran for more than a month with continuous missile fire raining on their assets. Good luck for finding willing mercenaries for going it alone against such a foe.

PS : i'm not a Basiji, I actually hate the IRI, since they have ruined the country in so many ways obviously. But i cannot stand pro-US/Isral/GCC fan boys such as yourself belittling technological achievements of my home country at every corner just because they don't like the people in charge politically in their narrow-minded perspective.

- the IRI have not ruined the Nation -you will learn this with time!.

I see I forgot to sign my previous post, it was actually me talking. Hence, obviously I guess I will have to disagree, since in my opinion time has already told us the country is indeed ruined, but let's stick to what we usually agree on, which represents quite a lot of points aside from the political and economical aspect ;-)

No because the regime consists of Arab wanna bees.

With the removal of Mat and AF, they, including "-A", can may tricks with you...

AnonymousFebruary 18, 2014 at 8:29 PM
No,the only "arab style" dictator was your good friend pahlavi