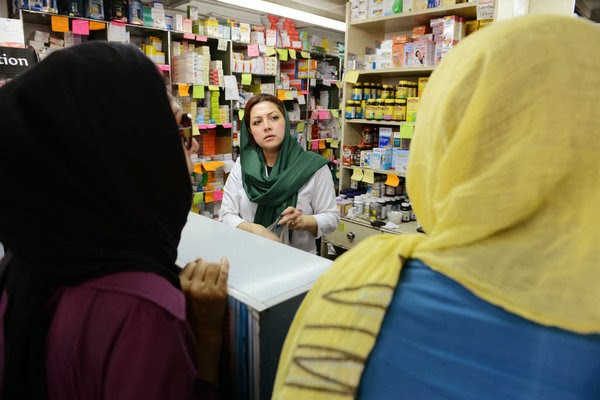 The Obama administration could ease the pain of sanctions on Iran by freeing up the country’s frozen overseas assets in installments if the Iranian government takes specific steps to curb its nuclear program, the New York Times reported today.
Such plan would give Obama the flexibility to respond to Iran’s initial actions to ease concerns over its program without having to lift the sanctions at this time.
The positive tone of Geneva talks, a senior American diplomat told the Times, was “intense, detailed, straightforward, candid conversations,” prompting new thinking in Washington about how to ease the pressure on Tehran, if the Iranians make real concessions.

Skeptics say the proposal might not satisfy the Iranians, whose goal is to get out from under all the sanctions that have devastated their currency, cut their oil exports in half, and left their economy with sky-high inflation and unemployment.
“The Iranians are looking for fundamental sanctions relief,” said Ray Takeyh, an expert on Iran at the Council on Foreign Relations. “I’m not sure whether they’d accept phased access to their own money.” (The New York Times, 18 October)
Meanwhile, Thomas Erdbrink of the Times writes in his Tehran Journal today that a “hopeful city, beyond campaign vows, waits for change in Iran.”
“Rouhani’s campaign excited Iranians’ expectations by promising to get suffocating Western sanctions lifted, but four months after Mr. Rouhani’s election and two months after his installation as president, people here in the capital are still waiting for the great changes that most of them are longing for,” writes Erdbrink.
To read Thomas Erdbrink’s excellent essay from Tehran, please click here.

Photo credit: A pharmacist helping customers in Tehran this week. High drug prices are one of the many effects of sanctions troubling Iranians. (Kaveh Kazemi/The New York Times)
Posted by Nader Uskowi at 8:18 AM

Lol now the us is doing bullshit tarof. Nothing will happen until iran accepts all demands

I disagree, Nader, I don't think Endbrinks essay is "excellent". I think instead it's heavily partisan.

I mean, what would we think of an essay penned by an Iranian national in Washington that characterized the recent U.S. shutdown and looming debt ceiling entirely from the viewpoint of liberals, and relegated our conservative politicians and voters as mere hardliners?

That's really the main problem with Iran reporting here in the United States. It rarely provides a balanced picture of Iran, or even Tehran, as a whole.

Erdbrink is reporting the mood among the electorates in Tehran who elected Rouhani by widest margin to end sanctions and improve the economic situation of the country. What they told Erdbrink is not surprising at all for anyone who had followed the recent presidential election closely.

it's an pretty good idea.


the US is NOT going to dismantle the sanctions quickly or until after Iran has allowed FULL inspection of all known and suspected nuclear development sites.

this is something that can be done during inspections

If this were the TV show Walking Dead, Mark would be the guy living in the safe area with the humans, telling them how much better it is to be living with the zombies. In my life I have only seen such absurd dishonesty in Iranians.

LOL
how can nothing happen ?
are you obama or Khamenie

read North Korean newspapers and you'll find other drivelers of diarrhea equivalent to Mark the fanboy.

even as a liar he's nothing really special.

The problem with this idea is that this then becomes a substitute for the actual lifting of any sanctions,and the big question is just how many sanctions does obama have the power to remove,the problem for him is that for some of these it requires the approval of congress to repeal and that even if iran scrapped its entire nuclear program it still would not satisfy the legal requirements for suspension,so for some of these the us has legislated itself into a corner,how they will get out of that will be interesting to see

Koreans as a culture are relatively honest. Iranians are not

There are no sanctions on medicine. So why the picture of a pharmacy?

Anon 12:10 PM just proves that behind all the propaganda, the anti-Iran people are just old fashioned racists.

the inflation caused the cost in rials of imported medicines to skyrocket, the Iranian government didn't make available sufficient funds and the regime tried to blame the shortages on the sanctions.


When health minister Marziyeh Vahid Dastjerd said only a quarter of the $2.4billion set aside for medicine imports had been provided in 2012 and that there was a shortage of foreign currency for the shipments, she was dismissed from office.