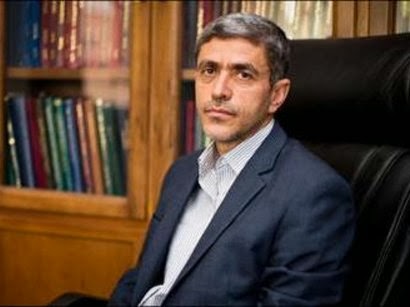 Iran’s Minister of Economic Affairs and Finance Ali Tayyeb-Nia today cautioned against the expectations of a quick removal of the sanctions against the country.

“If we hope that the sanctions would be lifted in the near future and a breakthrough would occur, it would be wishful thinking, because the removal of the sanctions is a long-term process,” Tayyeb-Nia said. (IRNA/Press TV, 6 October)

Tayyeb-Nia yesterday announced that Iran’s inflation rate has climbed to 40 percent, and his comments today is a warning not to wait for lifting of sanctions to address serious economic woes facing the country. It is not clear, however, if the economy can respond to any stimulus plans by the government short of the lifting of oil and banking sanctions.
File photo: Iran’s Minister of Economic Affairs and Finance Ali Tayyeb-Nia. (IRNA)
Posted by Nader Uskowi at 1:41 PM

I agree with his assesments. The global finance sector has excluded Iran from any transactions and even if they lift restrictions on Iran, it will take ages before they are implemented and Iran is integrated again into the global finance system.

Those who were sitting and saying that sanctions will do more harm to others than Iran, can look again!

The Iranian leadership is aware that many U.S. sanctions can not be stripped away at a stroke by POTUS but require congressional agreement:

Judging by the current power struggle between POTUS and Congress, the Iranians are sure to judge that POTUS is not in a position to deliver such sweeping change, and the Iranian minister is publicly pointing this out in general terms.

For their part, the Iranian leadership is and has been in a position to offer a sweeping change, as previously seen in its ill-fated 2010 Tehran Declaration.

At last, a straight-talking minister! Honesty is the best approach.

again barking on the wrong tree!

the issue has not gone there yet. even if the congress rectifies the easing of santions it will take years before these obtacles are removed from the food chain so to speak. he is not saying anything clever. now that they have screwed up the whole economy it will take years or as decade before they can go back and capture their markets. case in point. how long took for Iraq after the defeat of Saddam to get back to businuess and not fully there. they have messed it up so badly that they don't know where to start!

it is not a bad idea not involve too much in moloch called Global Finance system.

so by the way why
Iran needs age to be included in finance system again ?
I am coming claim, to connect iran to the Swift Systwem is matter of few Hours

" Judging by the current power struggle between POTUS and Congress, the Iranians are sure to judge that POTUS is not in a position to deliver such sweeping change, and the Iranian minister is publicly pointing this out in general terms."

another bowl of hot horsesh1t from the fanboy.

the president of the US is not remotely interested in stripping away the sanctions from Iran all at once or even soon after any deal is signed.

the US is not going to trust Iran's signature. Iran is going to have to demonstrate that they have met their obligations under any agreement and allow outside inspection to verify their actions PRIOR to the lifting of any major sanctions.

you crap about a power struggle is untruthful and inane. there is NOBODY in a position of power in the US who supports dismantling sanctions quickly.

too many years of Iranian dishonesty and hostility and Marg bar Amrika.

And they, Rouhani team, have Declared that they "will force" the West to an agreement.

I think that an end of sanctions by Russia is more realistic than talking blah, blah, blah and.....waiting for Zionist lobby's permissions to lift the most sanctions.
The Supreme Leader in his latest speech described US position as a one that is controled by Zionists and Israel...

Therefore, it would be better to speculate how a cooperation with Russia; after lifting sanctions by Russia, can mitigate western stupidity and impotence to release themselves from Zionist syndroms......

Iranian unemployed and others can be retrained and work in Russia, gaining skills in aviation and other industries....
Irans can negotiate any payments to Russia on a loan basis, secured, for instance, by Russian tourism to Iran and development of Persian Gulf tourism facilities, as well as acesses by the Russian Navy to Iranian naval facilities...and so on.
Note that large numbers of Russian tourists go to Dubai and vicinities and why not to the Iranian coastline ?

The only "horsesh1t" here is from malcontents like you.Mark Pyruz makes an excellent point,its not if "uncle oby" wants to make a deal,its whether he actually has the power to make a deal,if he can then sanctions would have to be removed in stages according to a mutually agreed timetable
"too many years of Iranian dishonesty and hostility and Marg bar Amrika."
too many years of american dishonesty and hostility and attempted regime change.

So what you're saying is that Iran should be a puppet state of Russia. Also the Russians wont be very happy seeing Iranians taking over their jobs away from them.They can be a nasty bunch.
And by the way, Russians love their vodka and men and woman go swimming together. So your Iranian coastline theory for Russian tourist destination is out the window.

There are some Iranians who embrace truth and reality, instead of constantly being fraudulent haggling rug salesmen.

Anon 8:59PM
Russia population will shrink, acording a prognosis, from present over 140 millions to around 100 millions in the 2050.

In order to keep a significant growth of Russia economy they will have to "import" foreign workforce each year in significant numbers.

Iran will be a primary military customer of Russia in the future, so if Russia has problems to manufacture helicopters or submarines (Kilo) and so on. at a sufficient pace, to meet demands from customers and its own military, they might invite Iranian workforce and specialists, or transfer production of components to the Islamic Republic.

Regarding your concerns about "puppet state", Russia demographic problems and a possibility that Iran in the 2050 will reach current number of Russia population, can nullify yours fear...

Regarding your vodka and swimming toogether's concerns, a time can bring proper solutions....

no the fanboy makes nary a valid point. the administration has complete authority to negotiate a deal and there is no real limitation of his power to do so.

in the US, treaties don't need approval by the lower house of Congress, where the republicans have a majority.

Only the US Senate signs off on treaties and the Senate is controlled by Obama's party.


this is far different from Iran where the President has NO real authority concerning foreign relations and does nothing unless it's approved by his master, Khamanei.

Pity about all those sanctions that can only by repealed by congress,in theory it might not limit uncle oby,but in reality it does make it so very hard to do any deals,the point here is that both uncle oby and rouhani are dependent upon others signing off on any deals,neither have absolute freedom of action