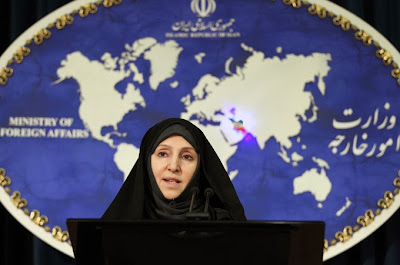 Iran and Britain have agreed to exchange diplomats and begin talks aimed at further improving relations, officials from both countries confirmed today.

“Pursuant to a decision by the Iranian parliament, it was agreed that from today the two countries have a relationship at the level of non-resident charges d'affaires,” announced foreign ministry spokeswoman Marzieh Afkham. (ISNA/Al Jazeera, 8 October)
British Foreign Secretary William Hague said that he and his Iranian counterpart, Javad Zarif, had agreed to appoint non-resident charge d’affaires, which would discuss the eventual reopening of the British embassy in Tehran and the Iranian Embassy in London.

British embassy in Tehran was closed after a mob overran the building in late 2011. Iranian embassy in London was also closed.
The recent election of Iranian President Hassan Rouhani has raised hopes of a thaw between Iran and the West.
Hague told lawmakers the coming months “may be unusually significant” in British-Iranian relations.

“It is clear that the new president and ministers in Iran are presenting themselves and their country in a much more positive way than in the recent past. There is no doubt that the tone of the meetings with them is different,” he told the House of Commons. (Al Jazeera, 8 October)
Photo credit: Iran’s foreign ministry spokeswoman Marzieh Afkham announcing the resumption of diplomatic thaw with United Kingdom. (EPA/Al Jazeera)