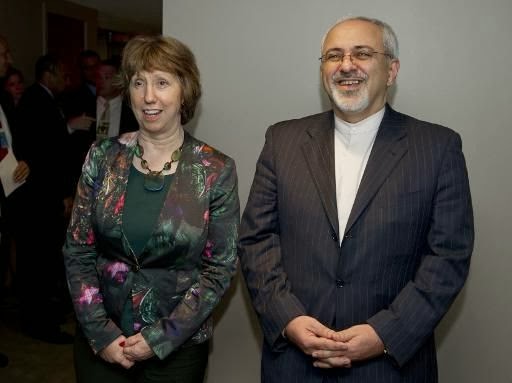 Iran today called for fresh proposals from the six major powers in talks on its nuclear program set to resume next week. Foreign Minister Mohammad Javad Zarif said the previous offer, made by the P5+1 in Almaty, before Rouhani’s election, was no longer valid.

“The previous offer by the P5+1 is history and they should come to the negotiating table with a new approach,” said Zarif. (ISNA/AFP, 6 October)

Those proposals required Iran to suspend uranium enrichment at the 20% level, and to halt enrichment at its underground plant at Fordo.

EU foreign policy chief Catherine Ashton, who represents the six powers in the talks, said on the sidelines of the UN General Assembly last month that she was still waiting for Iran’s response to those previous proposals.

“Our goal is to master peaceful nuclear energy, including uranium enrichment on our soil. Their (P5+1) goal is to keep Iran’s nuclear program peaceful forever… We should find a way to achieve both goals at the same time,” Zarif said. (AFP, 6 October)

What the Iranians are saying is the "carrot" of merely allowing oil traded for gold from specific nations is not enough.

The Iranians are expecting to enhance their ill fated 2010 Tehran Declaration with a more expansive inspection regime and the adoption of the AP, in exchange for substantive sanctions relief. To this, the SL branch of IRIG is skeptical American leadership is capable of accepting,

what the Iranians are saying is that they enjoy having the sanctions and that they prefer to keep the sanctions in place rather than cease the enrichment and weapons development research.

it's their choice to make and we should all applaud the brave way that they defend the right to defy the world. better to rule Iran and take it to hell than honor their obligations. bravo Zarif and enjoy the trip. send the fanboy a postcard.

AnonymousOctober 7, 2013 at 1:37 AM
Iran has every right to enrich,and where is the proof of this mythical "weapons development research.",or dont you worry about things like proof or truth mr nutyyahoo fanboy?,I guess if you tell a lie often enough it becomes the truth right?
http://imgur.com/EUjGgax

An excellent point. As a member of the NPT, Iran has the right to nuclear enrichment. Of course Anon 1:37 AM does not worry about inconvenient little details like proof. Like all hasbara shills, they just post whatever nutty nutanyahoo says, provided in a list of talking points from the hasbara ministry.

Iran has failed to fulfill its obligations under the NPT for a long time and has been caught out in failure to the point that the IAEA has reported Iran's deficiencies multiple times to the UN and the UN Security Council has sanctioned Iran many times.

Iran can not claim NPT rights unless Iran fulfills its NPT obligations, kid. that's simply the way that contracts work.

AnonymousOctober 7, 2013 at 10:15 PM
Irans nuclear rights are sovereign they do not come from the npt,the npt is a bargain in return for non nuclear weapon states voluntarily giving up some of their rights they will be supplied with civilian nuclear technology,now iran was never supplied with this technology,the nws never lived up to their part of the bargain,iran gets nothing from remaining with the npt it only stays because the political costs of leaving would be high.The iaea had no right and there was no precedent for passing irans nuclear file to the unsc that was purely political.ALL of irans fissile material is accounted for and safeguarded by the iaea,there is no proof of any weapons program apart from western allegations made without any proof.Sorry "kid" but repeating western lies and half truths wins you no points on this site

Iran's rights certainly do arise from the exercise of sovereignty. However once the sovereign nation of Iran freely signed the treaty, they renounced the rights covered by the agreement.

this is not complicated.

as long as Iran remains a party to the agreement, those rights have been alienated....... when and if Iran withdraws from the NPT, you'll be correct, but as of now, you're pissing up a rope.