Russian Air Force Lieutenant General Bondarev arrived in the Iranian capital at the head of a Russian military delegation on Sunday. 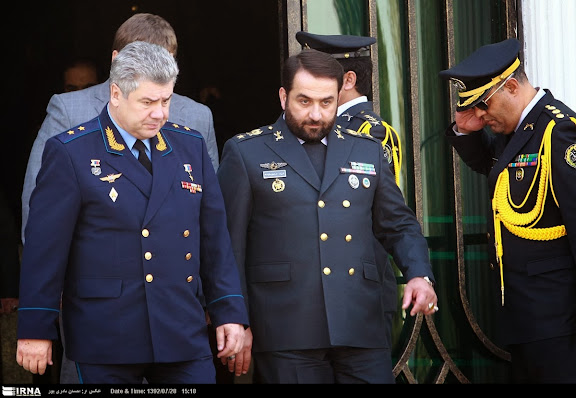 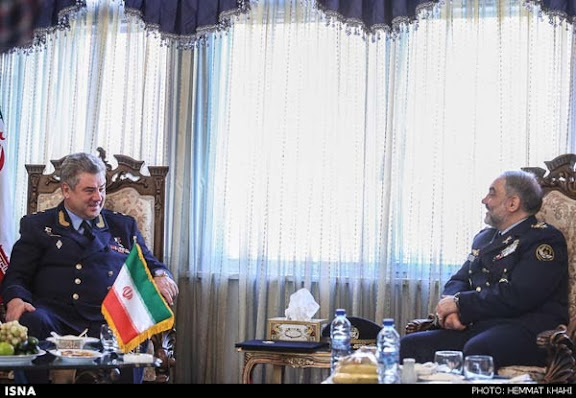 Photos: Heymat Khahi at ISNA, IRNA
Posted by Mark Pyruz at 2:01 AM

During the meeting of the Iranian AF Gen. H. Shah Safi and Gen. V. Bondarev, the Iranian side proposed that the Iranian AF is ready to train pilots for the Russian AF academy.
Apparently it is related to the last summer statement by the new Russian DM Gen. S. Shoigu, who has stated that there is an urgent necessity to significantly increase total numbers of the Russian Air Force pilots....

Recent visit by the Russian AF commander and his meetting with top commanders of the crucial branches of the Iranian miitary, as well as a planned visit by the Russian missile cruiser, shows that military cooperation of both countries has been advancing to the highest levels, and nullifies enemies' hopes for a lasting rift in the coooperation of both countries.

Looks like new Russian defense minister Gen. S. Shoigu has been implementing his pronounced strategy, that states that like in laws of the physics, every (enemy) actions will create proper reactions...from Russian side.

US prolonged deployment to Jordan, has apparently prompted these Russian reactions.

you think that the Russians are going to send people to be trained as pilots to a place such as Iran???

Yeah, the Iranians (Mullahs and Bache basijis) are going to help the Russians with their Space program and train their new Cosmonates and design new space capsules for them as well !!

Maybe if Russia is lucky Iran will supply them with their super advanced Ghadir submarines :o)

Anon 3:09
I think your time is much better spend focusing on your school homework. Please grow up.

ALL anons and the "Reader's" replies.

The truth is painful for you, and you apparently survive on lies of Nutanyahu, who claims that Iranians want to possess nuclear weapons, and are not free because they cannot wear jeans....

It is true that Rusiia has been interested in Iran's materials gained from the RQ-170 and other expertises related to the developments of UAVs by the Islamic Republic.
Last summer, Russian Defense Minister S. Shoigu issued a direcive to speed developments of all kinds of UAVs and UCAVs up, and has anounced that 20 tons UCAV should fly around the 2018 year.
So Iran's information will be very helpful for Russian and Iran will gain ...something too.

Note, that there are no information whether Gen, Bondarev has met Iranian DM...

I advise all of you, to help the Zionists to improve their image.... and replace their "pastor Jones"...for their salvation from a s........

Anon 3:36
I could not agree more. Shame you didn't get the hint in my reply.