Iran, U.S. Diplomat to Meet on Sidelines of Geneva Talks 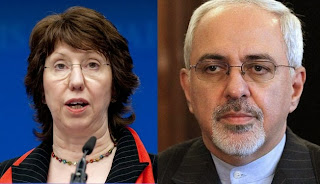 Iranian diplomats attending the Geneva talks will meet with their U.S. counterparts on the sidelines of a two-day talks in Geneva that begin on Tuesday, IRNA reported today.

Meanwhile, Iranian Foreign Minister Javad Zarif met with EU foreign policy chief Catherine Ashton late on Monday to discuss Tehran’s nuclear proposals.
“The sides discussed the new Iranian plan that would help to break the deadlock in the talks. The details will be made public later,” Russia’s RIA reported tonight.

Fingers crossed for a deal, any deal, as usual.