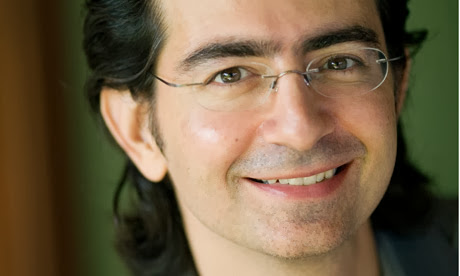 
Mr. Omidyar confirmed that he [will] be personally financing a new “mass media” venture, where he will be joined by the journalist Glenn Greenwald of The Guardian, the British daily. Mr. Greenwald gained notoriety this summer when he reported on the revelations about National Security Agency surveillance contained in papers leaked by Edward J. Snowden.

The details of the project are vague. “I don’t yet know how or when it will be rolled out, or what it will look like,” Mr. Omidyar wrote.

What is clear is that Mr. Greenwald will be there, and he is expected to be joined by Laura Poitras, the documentary filmmaker who was the crucial conduit between Mr. Snowden and Mr. Greenwald.

Pierre Morad Omidyar is a French-born Iranian-American entrepreneur and philanthropist, who is the founder and chairman of the eBay auction site. He became a billionaire at the age of 31 with eBay's 1998 Initial Public Offering (IPO). Omidyar and his wife Pamela are well-known philanthropists who founded Omidyar Network in 2004 in order to expand their efforts beyond non-profits to include for-profits and public policy. Since 2010 Omidyar has been invoved in online journalism as head of investigative reporting and public affairs news service Honolulu Civil Beat. [Source: Wikipedia]
Posted by Mark Pyruz at 3:35 AM

One of the world's most contributing, talented, brilliant, innovative , eBay founder French-born Iranian expatriate teaming up with a notably professional, bold and press freedom militant standing up against a intimidating and corrupt state authority who has just shut the door of the historic Guardian institution which unfortunately doesn't have the guts to stand fully against its organized suppression, and this to provide yet another alternative to the powerful establishment of Mass Media ? I have a feeling this is going to be somewhat a good day for me :-) Can't wait to have more details about this one.

80 % of Iranian support relations with USA

Quite a toffee thang....does not reflect the reality. If he were a philonthropist....he should use his money/voice to help the Burmese Yohingya who no one cares for.

As an Iranian this makes me feel so proud! Thank Mr.Morad Omidyar , we love you and support you 100%.

yes, it would be very interesting to have Greenwald write about the freedom of the press that he holds so dear in relation to the outright censorship practiced by the vile Iranian theocracy.

Yes, why not ? but I'd retort that there are already many individuals, entities, governments, authors and dedicated NGOs doing a great and respectable work in denouncing whatever the indeed corrupt and evil theocratic dictatorship of Iran tries to hide in its countless and diverse abuses it commits against its own people on a daily basis. My own father does a pretty good job in doing just that and I help him as much as I can in that regard.

But that certainly cannot prevent me from seeking Mr. Greenwald's insight on the direct MI6 intervention regarding the ordered destruction of classified material he was about to publish lately about British gov't abuses towards their people's supposedly granted liberties and right for privacy that they count among their most fundamental rights and pride as a free Nation. Iran is not related to this particular subject and you have more than ample space on this blog alone to condemn it, just like I regularly do myself, and couldn't thank Mr. Uskowi more for his highly professional and democratic fashion of managing the whole thing. As you know, Iran is a renowned theocratic dictatorship that openly promotes suppression of what they call "internal subversion" by whatever dirty and tragic means they deem necessary in the name of Islam and who knows what else, whereas the British government counts among those western post-colonial, self-proclaimed holders of virtue tirelessly preaching nice variable geometry concepts such as democracy, transparency and freedom to the whole world and lecturing it about it in the most condescending manner whenever they get the opportunity to do so, quite often using it as a pretext to move their geopolitical agendas at the expense of human life via the force of heavy arms like in Iraq or Afghanistan, while being less and less able (and willing) to respect it at home, which I find both quite ironic and hypocritical. Don't tell me the irony you expressed is a reflection of your belief that I am some kind of IRI fan just because I hail the efforts of a British insider and his brilliant Iranian expatriate future sponsor, against the growing degree of vicious and insidious danger his home country allows itself to expose its people's Rights to the liberties they should be normally entitled to, by sneaking into their lives, and even the most secret and sacred circles of foreign countries and their citizens not posing a direct threat to theirs ;-) Fortunately both the British AND the American people are waking up to these sad realities and have prompted their respective governments to act accordingly at least in facade for now. We are going through interesting times indeed these days, I hope the awakening keeps going that way. We can't afford to let any government get into the habit of doing whatever civil abuse it wants against its own citizens. What would become of our children and grand-children in 50 years if we let our liberties get eaten bit by bit ? Today's Iran is enough of an example not to follow.

Why should you be proud? What has Omidyar actually done for Iran or Iranians?

the guy is an American citizen born in France of Iranian parents and was raised as an American.

I don't know for AnonymousOctober 17, 2013 at 1:42 PM, but my answer can be read above. He does not need to specifically do something directly for Iranians to make me feel somewhat proud, I do not feel so self-centered when it comes to contributions of principle in general. He is a brilliant example of what an Iranian can do in the world, expatriate or not, and provide a nice alternative to the backwards, bleak and dark associations that the IRI, and consequently the highly opportunistic western mass media both traditionally try to make of Iran and being Iranian for the average non-Iranian citizen, and remind the latter that most brilliant minds of our generation counts many Iranian graduates among its ranks, in its maintained tradition of academic excellency I couldn't respect more... like 40% of NASA engineering team members to quote only that. It tends to shut the hell up of some vicious and sadly, very common Iranian-bashing mouths one can witness in a growing number of circles in the world specially since Ahmadinejad came to office. And also, considering I personally support the cause Mr. Omidyar chose to become a sponsor of, as I explained above too, I find there is nothing odd with that stance of mine. Either you adhere or you don't, but it's merely a question of opinion, it's not inappropriate to appreciate the man as he is.