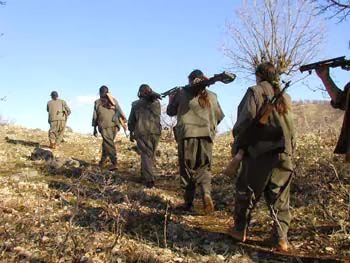 The Free Life Party of Kurdistan (PJAK) on Saturday warned it would not let Saturday’s execution of one of its jailed leaders Habibollah Golparipour go unanswered.

Since 2004, PJAK has taken arms against the central government in Tehran. It says its goal is to establish a semi-autonomous Kurdish regional entity in Iran, similar to the Kurdistan Regional Government (KRG) in Iraq. PJAK claims it has about 3,000 armed militiamen, half of them women. It is widely believed that PJAK is a wing of the Kurdistan Workers’ Party (PKK), Turkey’s militant Kurdish party. PJAK leader Abdulrahman Haji Ahmadi is based in Europe.

“Our senior leader Golparipour was hanged by the Islamic Republic and he died like a martyred hero,” PJAK said in a statement, also referring to him by his nom de guerre, Bahoz Sina. “The execution of Bahoz Sina will not go unanswered,” it warned. (ekurd.net, 27 October)

Since 2011, PJAK and Iranian security forces had been observing a de facto ceasefire, which has been breached at times. But in its unusually strong statement, PJAK warned that the recent developments have put the ceasefire in peril.

“As usual, Iran's response to our peaceful attempts is attacks, pressure and the execution of Kurdish political prisoners,” it said. ”In a situation like this a ceasefire becomes quite difficult and we will have to reassess Iran's policies towards the Kurdish people.”

“The Islamic Republic is speaking of political opening and democracy in its international relations, but inside the country it is pursuing a very hostile policy towards minority groups, including the Kurds,” read PJAK's statement. (ekurd.net, 27 October)

another bunch of delusionists that have been fighting for this so called independence in iran, iraq, turkey and syria and going nowhere. look at what happened in iraq! the area has been turned into mossad front post for attacks and spying agaist iran and turkey. these people are nomads and will remain nomads. they commit crimes in iran and go get asylumn in sweden. that is all they have achieved. andf of course their so called leader is in europe living on drug and human trafficing from the nomads in iran and turkey. i have no sympaty for these people.

Drove across so-called "kurdistan" eastward into Iran in 1975. As hard as it may seem to realize today, it was even more of a war zone back then.

When we reached Tehran, my relatives were angry at us for so tempting fate.

YOU can not win your cause by terrorism ! ,decimation of defenseless women and children!.