A Report by Thomas Erdbrink of The New York Times 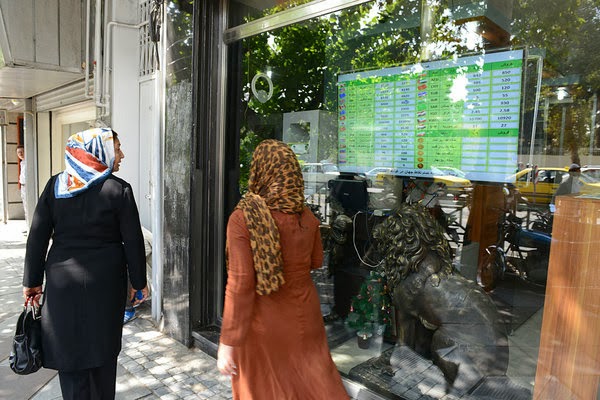 Today, the Central Bank of Iran (CBI) reported that the country’s domestic industrial growth dropped by 27 percent in two years. Last month, the CBI reported that the national economy for the past Iranian calendar year that ended on 20 March contracted by 5.4 percent, with the inflation rate at 44 percent.

The economy is projected to shrink at least another 2 percent this year.

Thomas Erdbrink, the longtime Tehran correspondent for The New York Times, in an excellent piece published today, puts such numbers in perspective by quoting government officials on the dire economic situation in the country and reporting the day-to-day struggles of Iranian businessmen in an economy starved for cash.

The owner of a bus manufacturing company explains his daily routines of going to work and ordering cups of tea, and not much else.

“It looks like I’m working, right?” the owner, Bahman Eshghi, told Edbrink. “No. In reality I am praying, either for a miracle to save our economy or for a fool to come in and buy my factory.”
“Like a camel can survive in the desert on the fat in his hump, I have survived on my savings in recent years,” Eshghi added. “But now the end is near. I’m giving up.”
The frustrations encountered by Mr. Eshghi in trying to conduct normal business deals are by all accounts typical, Erdbrink reports.
Meanwhile, the new government, breaking with Ahmadinejad administration’s public denials of economic woes, is increasingly reporting the facts, like the negative economic growth numbers mentioned above. President Hassan Rouhani and his foreign minister, Mohammad Javad Zarif, are saying that the government’s financial condition is far more dire than previously disclosed.
Quoting Western economists, Erdbrink says the crisis point may be much closer than previously thought, perhaps a matter of months. Some lower-level Iranian officials and businesspeople are saying Iran’s economy is already on the verge of collapse. And Iran news outlets have reported that the government owes billions of dollars to private contractors, banks and municipalities.
Iran’s foreign exchange reserves are estimated at $80 billion. But the figure is misleading as fully three-quarters of the $80 billion is tied up in escrow accounts in countries that buy Iranian oil — the result of a U.S. sanctions law that took effect in February. Under that law, the money can be spent only to buy products from those countries. The access to the remaing $20 billion is also difficult – it has to be physically moved into the country as cash because of Iran’s expulsion from the global banking network Swift, which would have allowed the money to be transmitted electronically. (The New York Times, 1 October)
To read Thomas Erdbrink’s article, and detailed account of the difficulties facing the featured businessman in conducting financial transactions, please click here.
Photo credit: A currency exchange office in Tehran displaying rates in a window. Sanctions over nuclear efforts have starved Iran of cash. (The New York Times)

No type of propaganda from the regime can hide the fact that Iran is deep in it.

However not rported by uskowi ( only bad news are good news)
in last weeks Rial gained about 25% against $
from 40,000 Rial to 30,000 Rial
thx to the blockade in us congress the rial will gain more
2014 will econmoy back to the growth

The exchange rate of 40,000 rials to a dollar was last year’s during Ahmadinejad’s administration. We have covered the strengthening of rial after Rouhani’s election, notwithstanding your resentful comments about this blog. Also, 30,000 rials to dollar is not something to brag about!

The subject of this post was the current economic hardships facing the country; its economy shrinking by 5.4% last year and expected to shrink by at least another 2% this year. These are the Iranian government’s numbers. We don’t need another Ahmadinejad giving us a rosy picture.

the US Congress isn't going to do anything to loosen the sanctions that are choking the Iranian economy...... and unless Iran reaches a deal with the US, the economy of Iran wll not grow any time soon, but will continue to wither.

who cares about iran economy
About 1 million U.S. government employees are on forced leave because congress failed to pass a spending bill. So, is America a failed state

You might not care about Iran economy, we do! Amazing that you still read this post, thanks.

Also changing the conversation does not change the economic situation in Iran; will not bring down the inflation rate from 44%; will not produce economic growth when the economy has contracted by 5.4% last year, and on track to shrink another 2% this year. There is no reason to put political labels on these figures. The Iranian economy is in dire situation. Let’s hope Team Rouhani would pull the country out of its economic woes.

The Iranians still have a long way to go to match the terrible downturn that occurred a couple of decades ago to the CIS following the breakup of the USSR.

comparing Iran to the USSR is simply lame. the Soviets had a population 4 times the size of Iran's present one....and dominated not merely their own enormous land-mass Eastern Europe and other places.
their enormous military and competition with the US brought down the Soviets as by the 1980s, the military was consuming more the 75% of the Soviet industrial output.

Iran isn't going to drop as completely as the USSR because the Iranian regime will not be able to maintain its power over Iran as long as the Soviets did. unless the regime can undo the sanctions it'll be gone or be forced to adopt drastic changes in less than a decade.

Freedom costs,no one said that the price of irans independence would be cheap,Iran is fighting a cold war and one of those battlefields is economic,the challenge is for iran to find alternatives or else to live with these attacks,the sanctions can potentially be an opportunity,now although mr uskowi and some others here would like a return to the despoty of the shah most iranians wouldnt.The sanctions have hurt iran but the west has also payed a high price for them,but most importantly these sanctions have not achieved the goal of iranian surrender,what exists now is a stalemate and it remains to be seen whether negotiations can make that into a detente

You're a bit optimistic regarding the "less than a decade" part.

Anon 4:38 AM
The bloody sanctions are only a "opportunity" for countries like China to off load their rejected junk onto Iran and for IRGC smugglers to become rich from the backs of the Iranian people.

And by the way,you do not speak on behalf of "most iranians".

it's not at all a stalemate, 4:38. Iran is being seriously hurt by the sanctions and th rest of the world is not.

we're not stalemated because the game continues and Iran hasn't yet lost the game but it's currently losing and falling further behind.

The war is between iran and the west not the "rest of the world",last time I looked the sanctions on iran had cost the europeans dear,throwing away decades of business relationships and tens of billions in trade and leaving them even more dependent than ever on russia for their energy needs,so it is not just iran that pays the costs.It is very much a stalemate,the west has achieved none of its aims with respect to iran,has it achieved regime change?,has it halted irans nuclear program?,has it won in syria?,has it "contained" iranian power?,one only has to look at how western influence has declined in the region in the last 20 years by contrast iranian power,both soft and hard,has only grown

Russia and China voted to sanction Iran, buddy.... and the rest of the world are respecting the sanctions.

it hasn't cost the Europeans dearly, dear one. It's the Iranian economy that is melting... and iranian power is not only contained but the Iranian influence in the Middle East has been greatly diminished and the diminution continues.

The Assad regime has lost its grip on Syria and now simply tries to hang on, but Assad will soon be gone.... and Iran will lose it's one important ally in the ME and THAT lose may well spell the end of Lebanese hezbollah's dominance in Lebanon.

Anon 8:59 PM
You obviously haven't "looked" hard enough. Iran is the one hit hard by the sanctions and has cost its economy "dear". Not the other way round buddy. Iran under this regime has declined both economically and militarily. As for your claims about the nuclear program and Syria. Regime has not won this "battle" yet, let alone the war. Like the regime you try to portray a false victory for Iran. Typical mullah ways.

AnonymousOctober 3, 2013 at 2:09 AM
Has the west achieved a single one of its aims with respect to iran?,has western influence in the region increased or diminished in the past 20 years?,just how is the west "containing" iran when it cant even keep friendly despots in power in egypt or depose irans allies like assad,and just out of curiosity how much longer before assad is defeated?,people like your self have been prophesying his imminent defeat for the last two or so years,but I dont see the fsa rebels winning anytime soon,last time I looked they were losing territory to the saa and influence to al qaida affiliated groups

Anon 1:16 PM
And what the hell has the regime "achieved" for Iran except poverty, misery, stagnation, brain drain, executions, oppression, torture, destruction of economy,turning women into 2nd class citizens,maintaining terrorists and regimes with Iran's money. And now you have a mullah that used to drive around on a scooter singing rozeh for five tomans and was responsible for the 400 deaths in the cinema Rex fire as the head of a terrorist regime that is oppressing the Iranian people.