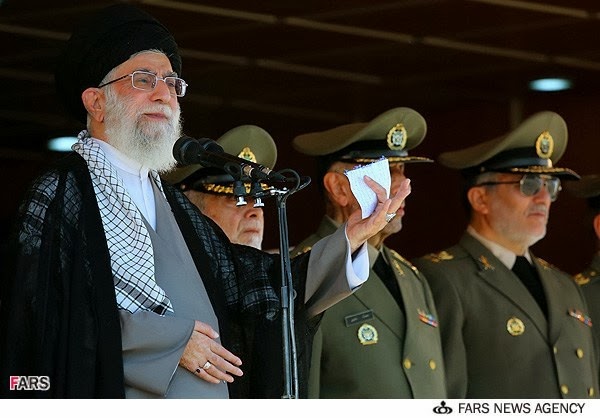 Iran’s Supreme Leader Ayatollah Ali Khamenei said he supports diplomacy along with “whatever happened” during President Hassan Rouhani’s visit to New York, and was “optimistic” about future diplomatic initiatives. But he added that some “events” during Rouhani’s visit were “out of place.” He also warned that the U.S. government is “not trustworthy and arrogant.” (ISNA, 5 October)

Ayatollah Khamenei, making his comments during the graduation ceremonies of Iranian military academy, was clearly referring to Rouhani-Obama’s 15-minute phone conversation; and as always he was hedging his bets; authorizing diplomatic initiative and warning against the U.S. If negotiations were successful, he can claim the victory as he supported negotiations, and if it failed, he can say he told Rouhani that the U.S. was not trustworthy.

His not-so-veiled reference to the phone call with Obama, however, is a clear signal that the country’s conservatives are angry at Rouhani for first suggesting to the Americans that such phone call takes place and later accepting the call during the last minutes of his trip to New York.

The leader is trying to calm the nerves of both conservative and reformist camps internally.

I am glad to see he is supporting Rohani. He is showing consistency in his backing of presidents in office.

as usual he is hedging his bet appearing to superfiicially support the current Iranian adminstration but in the meantime thrwing a catch that if things did not work, I warned them.

The issue is that I am now convinced more than ever that until the current regime which is built on anti-American, anti-Western agenda and survives on that is still around there will not be any change. these are all nonsences. they know that once they abandon these anti whatever, they will dissapear.

besides there are virtually a new class of moftkhors that are earning on real estate and currency fluctuations. most of them survive on current turmoil and are from sepah etc. they will lose out if the condition goes back to normal. you need to go to Iran and see for yourself how things are. it is a society deprived of basic civil elements. there are virtually hundreds of banks all over places providing 20% interest in a country that has 50% inflation! they survive because they skim on currency differences and using the deposits to flood the country with cheap runbbish from China and Turkey and making the domestic producers go bankrupt. now how Rouhani is going to get rid of these dozds? He may not be a dozd but he is part of this establishment and he won't be able to change anything.

It is not ‘fitting’ for an unelected supreme leader to undermine an elected president tasked with getting the country out of the current economic and political mess, the like of which a few nations have ever experienced. Power without executive responsibility need extreme grace for it to be palatable.

I don't see it as "hedging bets." Rather, it's a position of balance Khameni provides within the spectrum of Iranian politics.

As an American with a partial family heritage with continuos residence here in North America stretching as far back as the last ice age, I can tell you that within family living memory the current Iranian economic problem is not as severe as that which gripped the United States during the Depression. Nor is the current Iranian political situation anywhere near that of America during the Civil War, or for that matter the late 1960s, early 70s.

1) we are talking about 21st century and no we are comparing apple with apple in your example.
2) It always amazes me how much naiive you are in certain assesments. I guess you passionately believe in what you say. However, that cannot be an excuse for diversifying tactics that you throw in. To compare a country pretty rich and relatively educated in 21st Century with US in depression is just unbelievable

Nor is the current situation in Iran as bad as when Genghis Khan invaded.......but the situation facing Iran is still pretty bad, fanboy.

Rouhani was expected to have a free hand in negotiating Iran-U.S. relations for at least a year. It now seems that his mandate is much more limited that first thought or hoped. A look at today’s huge headline at Kayhan can prove the point: Sharatmadari has chosen to highlight Khamenei’s reference to Obama’s phone call. Rouhani appears to have one hand tied behind his back.

we are back to khatami era nonsence. we always associate AIPAC with Israel and their lobbying tactics for the benefit of small minority. Compare that with the rejectionist groups in Iran and their apparatus (newspapers, MPs, Sepah etc). I see little difference between these two interest groups. Their aim is to derail majority interest for their minority agenda.

Ohhh, Uskowi has expressed his opinion about Supreme Leader's statement, however he as usually, omitted essential parts of that statement.

Uskowi however, is afraid to repeat his opinions about Iranian ownership of the Persian Gulf Islands, the Egyptian military coup and other issues.