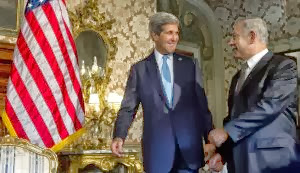 U.S. Secretary of State John Kerry today briefed Israeli Prime Minister Binyamin Netanyahu on developments with Iran. The unusually long meeting took place between the two, with no aides present, at U.S. ambassador's residence in Rome. Later they briefed the reporters.
“The words are no substitute for action,” Kerry said referring to the recent Iranian diplomatic initiatives to end the nuclear impasse.
“We do welcome the change of rhetoric, the change of tone, the diplomatic opening that the Iranians have offered,” Kerry said. “We are adamant that words are no substitute for actions,” he added.
“We will need to know that actions are being taken which make it crystal clear, undeniably clear, failsafe to the world that whatever program is pursued is indeed a peaceful program,” Kerry said.
“No deal is better than a bad deal,” Kerry said, adding, “President Obama has made it very clear he will pursue a diplomatic initiative, but with eyes wide open.” (AP, 23 October)
Netanyahu told Kerry, “The foremost security problem that we face, as you said, is Iran’s quest for nuclear weapons. Preventing that is a goal I share with you and President Obama, and you have said, I think wisely, that Iran must not have a nuclear weapons capability, which means that they shouldn't have centrifuges or enrichment. They shouldn't have a plutonium heavy water plant, which is used only for nuclear weapons. They should get rid of the advanced fissile material and they shouldn't have underground nuclear facilities, underground for one reason – for military purposes.”
“I think you're right. I think no deal is better than a bad deal. I think a partial deal that leaves Iran with these capabilities is a bad deal. You wisely insisted there wouldn't be a partial deal with Syria. You were right,” said Netanyahu, adding that, “In the case of Iran, it is essential that it be made to live up to Security Council resolutions that demand an end to enrichment and enrichment capability and an end to plutonium heavy water capability toward fissile material for nuclear weapons.”

Yet to be seen if the U.S. side is open to compromise and accepting Iran's rights as a signatory to the NPT. Our American side has spurned a number of Iranian compromises in the past, as well as a Russian one.

It all hinges on Iran's right to the nuclear fuel cycle.

A skeptical SL branch of IRIG and the IRGC are jexpecting another round of U.S. intransigence on the issue, which will serve to undermine Iran's new president.

Yes the u.s. Should trust and compromise with a regime you're afraid to live under. You won't trust them but the u.s should. What a dishonest lying joke.

So Mark finally states that other branches of the IRI will try to undermine Iran's new president.

However he or they avoid to take into a consideration the recent words of certain LADY with initials W.S., who recently stated before the US Foreign Affairs Committee of the Congress. to my best knowledge, that they (Iranians) have lies embedded in their DNA..

Mark is right,it all comes down to us acceptance of irans nuclear rights,if the us continues its previous record of intransigence then all bets are off,and kerry blindly agreeing with nuttyahoos
"no enrichment for iran" does not leave me optimistic,this is probably the last chance for those in irans government who favor a rapprochement with the us,one wonders if they`re just being given enough rope to hang themselves with[politically speaking of course]

Now it's official folks: New goals have been set out which is that Iran should not have even one centrifuge spinning. This Islamofascist Akhoond regime squabbled for too long... and this is what they get. They are to be neutered or else this god forsaken regime will be hit with the ultimate punishment, and not long after, be passed from existence with the use of military might...just as the Third Reich, except this one will be over much quicker.

...just as the third reich..!! except this one will be over much quicker!!-

@-unless you have your own method ,formula and the guts!.

@-Official from who?-YOU Nut ! need to burn extra oil in the night reading ISLAM and the Iranian Nation with your open eyes and wake up in the morning go open your ears to hear and learn something!

"If jobs offshoring continued, the US would be a Third World economy in 20 years,” Paul Craig Roberts wrote in a column for the Press TV website on Thursday.

“America is in the toilet, and the rest of the world knows it,” he wrote, noting, “More small businesses close, as memberships decline in golf clubs, as more university graduates return home to live with their parents, who are drawing down their savings to live.”

“With the world moving away from using the dollar to settle international accounts, as the Federal Reserve prints more dollars, the rate at which foreign holders of dollar assets sell off their holdings will rise,” wrote Roberts.

The economist added that the US neocons who rule in Washington and their Israeli ally are, however, determined that “Washington start yet more wars to create Lebensraum for Israel.”

“The decline in the dollar’s exchange value and the domestic inflation that results will force the Fed to stop printing. What then covers the gap between revenues and expenditures? The likely answer is private pensions and any other asset that Washington can get its hands on,” noted Roberts in his article.

"just as the Third Reich"! That says everything about the mentality of the anti-Iran people commenting here.

I make it crystal clear to you Islamofascists. This Akhoond regime is akin to the Third Reich ... one fine day it will be wiped out of existence.

"Islamofascists"? Lol, another made up, nonsensical, American word. The fact that a zionist and anti-Iran person feels a need to bring up the third reich is very revealing about the mentality of anti-Iran people. Thanks for showing to the world, your true nature.