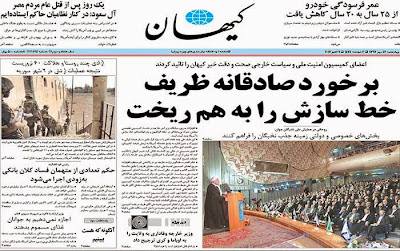 Kayhan, in a front-page report published on its Wednesday’s edition, dismissed foreign minister Zarif’s denial of its earlier report on the criticism of the supreme leader of his meeting with Kerry and Rouhani’s phone conversation with Obama.

We had reported in our earlier post, that there were speculations in Tehran that  Kayhan would stick with its original story, and it did. Below are the English translations of the key paragraphs of Kayhan’s latest report on the growing controversy inside the country on Rouhani/Zarif diplomatic initiatives during their trip to New York.

“On Sunday, Mohammad Javad Zarif was invited to brief the national security committee of Majlis on the government’s diplomatic initiatives during the New York visit.

“The committee spokesman, Hossein Naghavi Hosseini, briefs reporters at Press Club on committee discussions. (Voice and printed version of his remarks are online.)

“Hosseini says: ‘Zarif pointed out that they thought they had the authority to engage in phone conversation and meetings at the level that were conducted, but Hazrat Agha (Ayatollah Khamenei) pointed out that, first he criticizes Rouhani-Obama phone conversation and believes it was one of the missteps; and he considers the long meeting between Kerry and I as probably the other misstep of our trip.’” (Kayhan, 9 October)