IRGC: Iran Can Build ICBMs, But ‘No Need’ 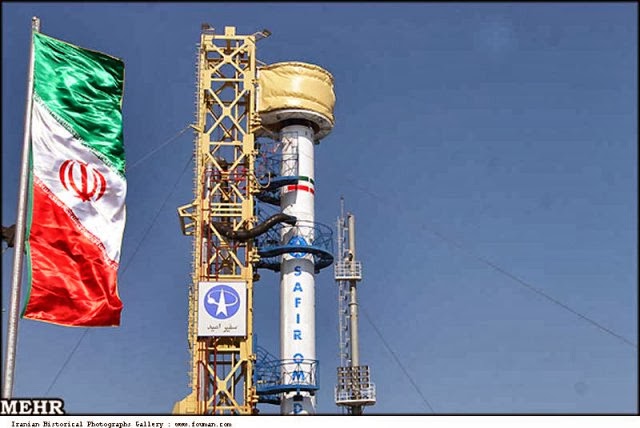 IRGC Aerospace Commander Brig. Gen. Amir Ali Hajizadeh said today in Mashhad that Iran has the capability and technology for the production of intercontinental ballistic missiles (ICBMs). The general added, however, that Iran does not see “any need” for their production.

“We were able to send a satellite into orbit, because we have this technology. But since Iran's enemies are not far from the border, we do not consider it necessary to face high costs and build such missiles,” Hajizadeh said. (Fars News Agency/Trend, 10 October)

Hajizadeh was referring to Safir, the country’s first expendable space launch vehicle (SLV) that has already placed satellites into orbit. The latest was the launch of Navid satellite into space in February 2012. Safir’s technology could be used to develop an ICBM.

By “not far from border,” the IRGC missile chief was referring to Israel as well as U.S. installations and assets in the Persian Gulf as potential targets. Iran currently has medium-range ballistic missiles (MRBMs) that can reach those targets. Shahab-3, Sejjil-2, and Ashura are the country’s advanced MRBMs.

The ballistic missiles were originally designed to carry nuclear warheads. The Iranian military is deploying them as the primary means of conventional retaliatory attack, making them less credible as a retaliatory force.

of course they can. Iran has built time machines and regularly engages in interstellar flight.

it's not just on this planet that they're full of shit and obnoxious braggarts.

Ashura was likely a Sejjil prototype. I believe you've mistaken this for Ghadr.

Closer to ICBM capability would be the Simorgh IRILV project, not the Safir IRILV. However this form of SSM technology would be highly vulnerable to a first-strike.

By "not far from the border," the IRGC-ASF commander is referring to (identified by U.S. military combat veteran Don Bacon @Going to Tehran):

– al-Minhad air base in Dubai, UAE
– Fifth Fleet HQ – Bahrain
– Kuwait, three bases, 15,000 US troops,, including a couple of brigade combat teams and a combat aviation brigade.
– Al Udeid Air Base, Qatar, forward HQ of US Central Command
– Overall in the region there are reportedly 40,000 American servicemen ready for action.
– Apparently the families of Coastal Patrol Craft will have the option of moving to the Gulf.:

Pretty scary stuff for we Americans. our service members and their families.

Is this like Saddam's promise to make half of Tel Aviv burn? We saw how "scary" that was.

more disingenuous fanboy bullshift..... Americans really are not scared of the military capabilities of the Iranian armed forces whose greatest strength is paying Arabs to commit terrorist attacks against civilians.


sit and spin, sonny.... what comes out of you is still gonna be noisome.

AnonymousOctober 11, 2013 at 7:27 AM
Saddam had less than a hundred poorly modified scuds with a CEP measured in thousands of meters,iran by comparison has a missile arsenal that depending on who you believe numbers only[!] in the low hundreds right up to as many as a couple of thousand[!!],these have a CEP of tens of meters depending on the warheads,iran can target anything within 2000km of irans borders and there are oh so many targets to choose from,iran has the largest stocks of sea mines and antiship weapons in the gulf,you know that same gulf where over 20% of the worlds oil has to pass through,theres little comparison between what saddam had 22 years ago and what iran has today,I also dont imagine that iran would just sit back and let the us build up an attack force in kuwait or saudi like saddam stupidly did

A perfect description of zionists and their shills they hire to spread their hasbara.

Anon 5:38 AM, a good point but, you are wasting your time with people like AnonymousOctober 11, 2013 at 7:27 AM. They are so pig ignorant that they don't even know of differences between Iraq and Iran. One can only feel sorry for such uneducated people.

Anon 5:07 PM, that makes a difference from American taxpayers paying zionists to commit terrorist attacks against civilians, in the name of religion.

Don't you know you're doing the same thing by spreading IRI propaganda on these pages?
You people feed off each other.

Anon 8:42 AM......How about the billions of dollars the islamic terrorist regime has given to Assad to terrorize his own people with? Meanwhile the poor Iranian people have no bread to put on their table while the thieving mullahs are getting richer and richer.

Would that be the same foolish and inept Saddam who was able to defeat Khomeini's plan to conquer Karbala, despite the fact that Iran has a much larger population than Iraq and despite Saddam's having to worry to some extent about Iraq's Shia majority not supporting his Baathist regime?

AnonymousOctober 12, 2013 at 4:34 PM
No that would be the same foolish and inept saddam who attacked iran,tried and failed to grab Khuzestan despite having the support of the arabs,the west and soviets and eventually bankrupted his country while gaining no iranian territory,at the end of the war he had gained nothing but billions of dollars of debt,he then turned on his arab allies and the rest as they say was history,just like saddam.The moral of this story is dont start a war with iran

Anon 1:43 PM, it is no more than the billions of American taxpayers' dollars given to the zionist terrorist regime and al qaeda/al nusra terrorists to terrorise the peoples of the middle east. Meanwhile, many poor Americans have no access to health services, no bread to put on their table or even a table to put bread on because they are homeless.

The moral of the story is don't send 12 year-old boys to conquer Karbala and Qods. It will only lead to hundreds of thousands of deaths, years of a futile war and a humiliating defeat (aka "drinking the poisoned chalice", as Emam described the defeat).

Anon 7:39 AM.....Dispite its problems the US is a very rich country and is a first rate economy/power.Besides the Jews donate hundreds of millions of dollars to Israel every year.People like you justify Iran's money being wasted by comparing it to the US. Your views don't reflect the reality of the situation in Iran when people are selling their organs to put some bread on their tables or are selling their bodies in the streets for their daily sustenance. I say let the Arabs kill each other and let them fight Israel and waste their money on wars. Iran should stay out of Arab/Israeli conflicts and start to rebuild the shattered social economic situation of the country. And that will never happen while a wannabee Arab regime is occupying Iran.

Above all, however, the mullahs in Tehran were confronted with the same
geostrategic dilemma faced by the shah a decade earlier: Iraq's position as the
major potential obstacle to Iran's quest for regional hegemony. Just as the shah's
road to supremacy involved subduing Iraq, the replacement of the status quo in
the Persian Gulf by an Islamic order had to begin with the removal of the primary
hindrance to this goal, the secular Baath regime. In the words of Hujjat al-Islam
Sadeq Khalkhali, "We have taken the path of true Islam and our aim in defeating
that a breach of any one would be considered a violation of the spirit of the Algiers Agreement.

Saddam [Hussein] lies in the fact that we consider Saddam the main obstacle to
the advance of Islam in the region.
Interestingly enough, Iraq's initial response to the shah's departure and the
emergence of Ayatollah Ruhollah Khomeini was by and large positive. Not only
did the Baath regime not attempt to take advantage of the civil strife in Iran to
revise the Algiers Agreement, but it was also quick to indicate its willingness to
abide by the status quo between the two states. As then-Vice President Saddam
Hussein put it, "A regime which does not support the enemy against us and does
not intervene in our affairs, and whose world policy corresponds to the interests
of the Iranian and Iraqi people, will certainly receive our respect and
appreciation."

This positive attitude toward the revolutionary regime continued throughout
the spring and summer of 1979. The Iraqi government took the opportunity of
Iran's withdrawalf rom the CentralT reatyO rganization( CENTO)t o offer its good
offices in case Iran should decide to join the Non-Aligned Movement, and as late
as August 1979 Iraqi authorities extended an invitation to the Iranian premier,
Mehdi Bazargan, to visit Iraq.25T he Iraqi leaders at the time referredt o Iran as
a brotherly nation, linked to the Arab people of Iraq by "strong ties of Islam,
history and noble traditions," and praised the revolutionary regime in Tehran for
pursuing a policy that underlined these "deep historical relations."

Tehran did not, however, reciprocate this goodwill. In June 1979, the
revolutionary regime began publicly urging the Iraqi population to rise up and
overthrow the Baath regime.27 A few months later, Tehran escalated its anti-
Baath campaign by resuming its support for the Iraqi Kurds (which had ended in
1975), providing aid to underground Shi'i movements (in particular the Da'wa
Party) in Iraq, and initiating attacks against prominent Iraqi officials, the most
significant being the failed attempt on the life of Tariq Aziz, the Iraqi deputy
premier, on April 1, 1980.

To check these pressures, Baghdad resorted to suppressing Shi'i underground
organizations, expelling Iranian citizens (as well as Iraqi citizens of
Persian origin) en masse, attempting to organize a united Arab front, and
supporting Iranian separatist elements such as the Iranian Kurds and the Arabs in
Khuzistan. These countermeasures failed to impress the revolutionary regime,
and, responding to Hussein's pledge to take revenge for the attempt on the life of
Aziz, Ayatollah Khomeini called on the Iraqi Shias on June 9, 1980, to overthrow
Saddam's government. Iran's foreign minister, Sadegh Ghobtzadegh, revealed on
the same day that his government had made the decision to topple the Baath

Geopolitical determinism: The Origins Of The Iran-Iraq War

Yes, a rich country with many poor citizens who have no access to health services, no bread to put on their table or even a table to put bread on because they are homeless. I say let the zionist terrorist regime pay for itself. America should stay out of Arab/Israeli conflicts and start to rebuild the shattered social economic situation of the country.

AnonymousOctober 13, 2013 at 10:27 AM
The only one who suffered the humiliating defeat was saddamn despite having the support of the arabs,the west and the soviets and iran suffering the chaos in the aftermath of the revolution,it was saddam who accepted the ceasefire terms long before iran did,it was saddam who bankrupted his country and achieved nothing apart from his own survival,in desperation he turned on his former allies and ultimately suffered an even more disastrous and humiliating defeat than the one he had suffered at the hands of iran