Survivor Of Hanging To Be Hanged Again!
By: Jabbar Fazeli, MD

The Eighth amendment of the United States reads: "Excessive bail shall not be required, nor excessive fines imposed, nor cruel and unusual punishments inflicted" (2). This amendment was ratified over 200 years ago, in 1791, and was based on the English bill of rights of 1689. This amendment reflects the basic human decency required of all government when dealing with "criminals".

The Iranian regime has long used slow strangulation and short drop hanging to kill individuals condemned to death. Despite all the supposed Iranian technological achievements, Iranian hangmen have yet to master the technique of long drop hanging (to ensure the neck brakes, allowing for instantaneous death). Victims of Iranian executions often struggle for long minutes until they finally die. This practice is "cruel and unusual punishment" by any civilized standard, even if its not mentioned in the Cyrus cylinder. http://www.uskowioniran.com/2012/10/iranian-inhumane-hanging-practices.html

This week one of the more than 500 Iranians hanged this year was found still alive by his family when they went to claim him from the morgue. Apparently the prison physician has declared him dead after a hanging that lasted 12 minutes (1).

This would have been a sad story with a happy and miraculous ending, if it wasn't for the extra twist; the judiciary has decided to re-hang this man, after he recuperates of course.

Needless to say, Amnesty international called for a halt to the second execution. It's surprising, however, that Amnesty statement doesn't delve into the cruel techniques used in Iran. I guess they don't want to be seen teaching hanging techniques while calling for abolishing the death penalty (1).

I'm reposting the, now obsolete, US military hanging document that provide a standardized weight/rope chart. With hundreds of hangings a year, it may be worthwhile for the Iranian Republic to use this document to educate its executioners. While they're at it,  they could also teach the prison doctors how to check for cornea reflex before declaring someone dead.
http://www.loc.gov/rr/frd/Military_Law/pdf/procedure_dec-1947.pdf 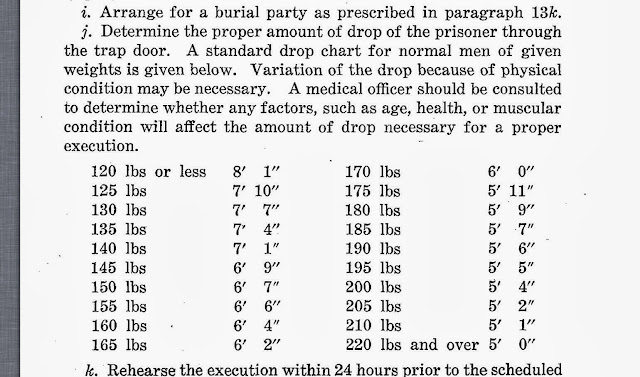 As for the technological barriers to humane hangings, I'm sure the IRGC engineers can be trusted with constructing the world's first portable reusable gallows, if they can take some time from their work on the Iranian space station that is.

Since the majlis (parliament) is not likely to write the eighth amendment into the Iranian constitution, it is left to up to the Rouhani administration to stop this style of hanging. Maybe they can see the benefit of spending a few thousand dollars to improve what's left of Iran's image!

I'm tweeting this piece to Rouhani. I'll be sure to post his response.

What about all the lives destroyed by the crystal meth he was transporting? Why only value the criminal's life? Why not value his victim's lives?

"by any civilized standard, even if its not mentioned in the Cyrus cylinder" -Jabbar

I don't get it, where does any of this fit in with the Cyrus cylinder? Are you saying the Cyrus cylinder is a human rights document? Hardly. Have you ever even taken the time to read it? It's a document justifying the use of armed military force and occupation.

We get you're against capital punishment but why not start here in your adopted country of residence? We just had a couple of recent executions in Georgia and Texas.

are you too dense to understand the distinction between capital punishment and needlessly and intentionally prolonged and painful executions?

or is this merely more of your cruel and usual dishonesty?

There is no continuity between Iran and Muslim Brotherhood republic; you can see in this documentary how the animal instincts of Muslim brotherhood (shia version of same sh!t) work if left unchecked; however the women in documentary still do not realize that they were attacked not because they are leftist but because they were Iranian; yes Muslim Brotherhood republic is a racist one - against Iran; like it or not: that is how the animal instinct of Muslim brotherhood work ...

Is this story even legit?,it has the distinct odor of bovine excrement about it.where is the story in the iranian press and how then did the western media find out about it
There are plenty of botched executions in the us as well,usually what happens is the execution takes a little longer while the problem is fixed and then it continues,in some cases the condemned,if they are very lucky,have their sentences commuted to life imprisonment,the idea that a botched execution somehow nullifies the sentence of the court and entitles the condemned to a "get out of jail free" card is silly and rather naive

@-WHICH means you have a load of issues with the establishment ! ranging from some wrong hanging practices to the space program

@And LOL! the A.I !.-Is this entity still alive somewhere?-we are very happy that they are showing some interest in the guy who survived in the hanging-now let us wait for them to react to the US daily mockery of justice in Somalia,Yemen,Afghanistan And Pakistan!.

@-the long -drop hanging technique that breaks the neck allowing for instantaneous death may be ''friendly'' and usual to you BUT DOES it leave a chance for lady luck to smile on a victim!?-like the luck lad recuperating in hospital!?.

You would think by now this barbaric regime would use scaffolding to hang their victims from?
Ever since day one this blood thirsty anti-Iran theocracy has been executing Iranians.

whether a story is reported in the censored Iranian press or not is unimportant in terms of whether or not the story is truthful.

" An Iranian grand ayatollah who issued a fatwa ordering the re-execution of convicts who come back to life has said his religious ruling should not be applied in the case of the man who revived in the morgue earlier this month."

" According to the semi-official Mehr news agency, Golpaygani has a fatwa in the second volume of his religious rulings, which says: "After the execution and before the burial, if the convict comes back to life while in the morgue or at the coroner's office and recovers after treatment, the verdict for Qisas (retribution) or Had (punishment) remains viable."

-the long -drop hanging technique that breaks the neck allowing for instantaneous death may be ''friendly'' and usual to you BUT DOES it leave a chance for lady luck to smile on a victim!?

even if the neck doesn't snap, it prisoner is still subject to the same slow strangulation to which the guys lifted by the cranes are subjected.

The problem with hanging is that it is unreliable as a form of execution,a better option is lethal injection but even that has some issues

...."even if the neck doesn't snap,it prisoner is still subject to the same strangulation to which the guys lifted by the cranes are subjected"!

So what?-you are selling sympathies to your readers for the victims without researching to know their CRIMES typical of a lazy researcher , too good to criticize but wont give any viable or worthy alternative!.

The blogger who brought this story says in His conclusion that He is tweeting to the PRESIDENT and He lives with a hope of some response from HIM!-- can't this win some appreciations from you for the down to earth nature of the establishment!-speaking to the president directly and being sure of a response from Him!-too far to what we are seeing in the self worshiping, 'all perfect', glowing and super shinning democracies in the west!!thousands of citizens pouring in the streets to beg their Governments not to kill people in Libya,Afghanistan,Iraq to no avail!.

And why are you so merciful to criminals and devils walking with two legs and in human flesh?
-do you wish the Government to go softly on these crazy fanatics wishing to plant bombs in mosques and market places?.Or hold shoppers hostage and create some sense of insecurity in the country?.

so open your eyes Man!-LET Them die!.Any death of any choosing!.-these people blow up Mosques in Iraq killing old men children and women and laugh all the way to bank thanks to their sponsors!-and a false promise of paradise for a job well done!.

Most of the drugs brought into the country is by the IRGC via south American and Afghan connections. So why not hang them instead? The IRI regime are the real criminals here.

again Bam-Bam a dopey comment that fails to address the issue under discussion.

the discussion is not about criminals and the death penalty, but is about the method of execution.