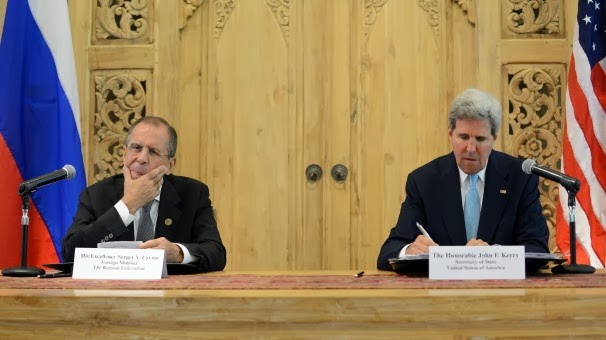 Secretary of State John Kerry said today that warming relations between United States and Iran do not mean the U.S. will back off its demands about Iran’s nuclear program.

Kerry made the remarks during a joint press conference with Russian Foreign Minister Sergei Lavrov on the sidelines of the Asia-Pacific Economic Cooperation (APEC) Summit in Bali. Kerry was effectively responding to yesterday’s remarks by Iranian Foreign Minister Javad Zarif who had said the current P5+1 proposal made in Almaty in February was “history,” and the P5+1 should come to negotiating table with Iran with a new approach. Iran had never responded to the Almaty proposal.

“Iran probably wants more clarity, more specific steps to be spelled out on the road to the result which we all want to achieve,” Lavrov said. “And I think this would be discussed next week in Geneva.” (The Washington Post, 7 October)

It's funny how true stereotypes are, in this case the stereotype that Iranians are over-haggling, dishonest, tricky rug salesmen. Embarrassing really.

If the U.S. approach remains fixed on Iran's surrendering of its nuclear program in return for sanction relief addressing only a couple of Iran's counter-sanction measures (like oil for gold from a few countries), then the next round of talks is bound to fail, just as the SL branch of IRGC and the IRGC are expecting.

Since you agree with and constantly propagandize the IRGS and Iran's leaders, then why don't you get the hell out of the U.S. and move to Iran?

Why should he move? One more braying donkey in Iran surely isn't needed and one less such jackass in the US won't much matter.

AnonymousOctober 7, 2013 at 11:28 AM
As opposed to the reality of the wests politicians as cynical liars merely repeating the same old lies ad nauseum

AnonymousOctober 7, 2013 at 12:09 PM
Why dont you go to some right wing board where your anti iran bias would be more appreciated

Mark is being honest and objective !-to win the support of the hardliners in Iran, the US needs to shade its lies and clumsy flip-flops and come on the negotiation table with a new approach since the new team in IRAN is fully committed to resolving the nuclear issue and open another chapter -just that!!.
now before you declare Mark a persona non Grata in the US ,do you get His point?