Netanyahu: No Partial Deal with Iran 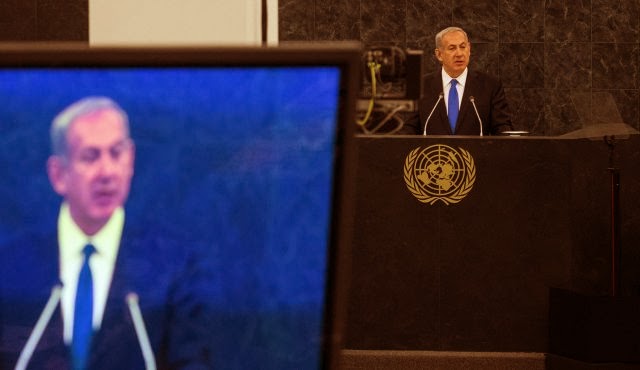 “Today our hope for the future is challenged by a nuclear-armed Iran that seeks our destruction. But I want you to know, that wasn't always the case. Some 2,500 years ago the great Persian king Cyrus ended the Babylonian exile of the Jewish people.

“President Rouhani, like the presidents who came before him, is a loyal servant of the regime. He was one of only six candidates the regime permitted to run for office. See, nearly 700 other candidates were rejected.

“Rouhani headed Iran's Supreme National Security Council from 1989 through 2003. During that time Iran's henchmen gunned down opposition leaders in a Berlin restaurant. They murdered 85 people at the Jewish community center in Buenos Aires. They killed 19 American soldiers by blowing up the Khobar Towers in Saudi Arabia.

“Rouhani doesn't sound like Ahmadinejad. But when it comes to Iran's nuclear weapons program, the only difference between them is this: Ahmadinejad was a wolf in wolf's clothing. Rouhani is a wolf in sheep's clothing, a wolf who thinks he can pull the eyes -- the wool over the eyes of the international community.

“Why would a country intent on merely civilian nuclear programs continue to defy multiple Security Council resolutions and incur the tremendous cost of crippling sanctions on its economy?

“And why would a country with a peaceful nuclear program develop intercontinental ballistic missiles, whose sole purpose is to deliver nuclear warheads? You don't build ICBMs to carry TNT thousands of miles away; you build them for one purpose, to carry nuclear warheads.
“Ladies and gentlemen, underground nuclear facilities, heavy water reactors, advanced centrifuges, ICMBs. See, it's not that it's hard to find evidence that Iran has a nuclear program, a nuclear weapons program; it's hard to find evidence that Iran doesn't have a nuclear weapons program.

“Last year when I spoke here at the U.N. I drew a red line. Now, Iran has been very careful not to cross that line but Iran is positioning itself to race across that line in the future at a time of its choosing.

(To Iran): “First, cease all uranium enrichment. This is called for by several Security Council resolutions. Second, remove from Iran's territory the stockpiles of enriched uranium. Third, dismantle the infrastructure for nuclear breakout capability, including the underground facility at Qom and the advanced centrifuges in Natanz. And, four, stop all work at the heavy water reactor in Arak aimed at the production of plutonium.
(To international community): “First, keep up the sanctions. If Iran advances its nuclear weapons program during negotiations, strengthen the sanctions.

Second, don't agree to a partial deal. A partial deal would lift international sanctions that have taken years to put in place in exchange for cosmetic concessions that will take only weeks for Iran to reverse.

Any other requests, Bibi ? how about transferring half of Iran oil & gas revenues when sanctions are finally eased, every year, for moral prejudice ? the guy's country holds the current world record of UN violations and is one of the most abusive countries in the world when it comes to Human Rights violations on its own soil. Occupation, widespread use of banned weapons, dispossession of property through the use of force, child imprisonment, offense to UN diplomats & infrastructure, the list goes on. And here he comes like a fully legitimate actor, bragging his orders against a country 80 times Israel's size and like 9 times its population. Even local new outlets are tired with his ever-growing obsession with Iran and the alleged external threat it constitutes for the jewish people... after all I can only understand him. Ahmadinejad and his revisionist speeches & conferences were indeed his best ally on Iranian soil. Worth a several hundred-dollar PR campaign, from the mouth of AIPAC itself, verbatim. Well, no matter the ultimate outcome of negotiations, get used to it Bibi, things have changed, at least on the media front, don't expect a blatantly anti-semitic posture you can point fingers at be taken by an Iranian leader anytime soon, you will have to deal with problems at home now, would it be Palestinians or Israelis angry with the cost of life. You still want to attack Iran, you'll have to do it on your own. Uh oh, but that's not possible, the enemy this time can fight back, and hard, like with 400 1-ton HE warheads on your capital city and its critical infrastructure, both military and civilian, let alone its ability to shoot your fighter jets out of the sky before that. And before the usual IDF fan-boys come and teach us how easily Israel can defeat Iran in the event of a strike, I'll simply advise them to do some reading and see why it hasn't happened despite an at least 5 year-old saber-rattling and the insistence of Bibi to rather drag the USA forward instead. And your military brass knows it so well it stopped you twice from undertaking a strike since the past couple of years. The Iranian government for its part, will have to cope with its own internal issues as well, when the nuclear issue is finally resolved and the threat of the Big Satan faded a bit. And i'm well happy with such a probable ending. If it ever ends.