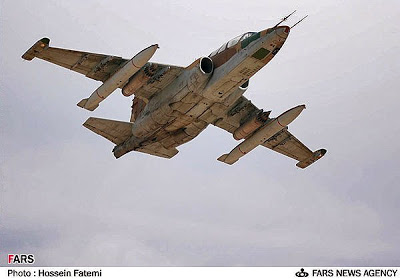 UPDATE: The Pentagon confirmed that Iran did fire on an unarmed U.S. drone. A Pentagon spokesman told Fox News that the incident occurred Nov. 1 at 4:50 a.m. ET. The spokesman said the MQ1 Predator drone, which was not hit, was flying 16 nautical miles off the coast of Kuwait in international waters, and never entered the 12-mile limit that would constitute Iranian territory.
Posted by Nader Uskowi at 2:22 PM

A job well done to the Iranian pilots and air defence.

They anticipated the path of a foreign aircraft and subsequently intercepted it, and forced it to cancel its mission and head away from Iran. The Iranian air force and ground control basically did their work. Had it not been done, had that enemy drone been left neglected and unchecked then it probably would have breached the Iranian air space.

Iran does not just send its fighter jets to challenge or contend other aircraft on a whim or for no reason. This was a legitimate interception.

It should not come as any surprise that the Americans have a staggering record of overtly spying with the use of drones, as well as a bad habit of violating other peoples land and airspace.

You would think that after all the hype, the IR Air Force would at least be capable of downing a defenseless drone.

It wasn't the Iranian Air Force, "Jabbar." It was the IRGC, i.e the Pasdaran. Please allow us men to speak of military matters. You have a coffee enema to go induce.

It doesn't take a military man to understand that if the Iranian Air Force in all its designations and separations can't down a drone, they would have a very hard time against the US navy F-18s and the Israeli F-15s and F-16s.

Don't you think that the Pasdaran's handmedown airforce should be at least able to down a drone, instead making headlines that they fired at one?!

@jabbar
the irgc's air force was judged unfit to defend iranian skies.. which is why all its planes are cargo and CAS like the su-25... anyways anybode have a link to the video feed of the drone? oh and these could simply have been warning shots...

It was nothing more than just a 'warning', and nothing happened. So, everybody can go back to life as usual.

The Iranian pilots better brush up their skills. How do you miss hitting a drone? We saw what Israel did when they shot down a drone.

IRGC or IRIAF,the facts are that the two SU25 planes had 500 rounds of ammo for its 30mm canon,and if intentional to shoot down shouldn't have missed.

But I personally think it could've been a warning shot to avoid further diplomatic crises.

8:12 ===you don't avoid a crisis by firing on a plane when it's in international territory, you invite confrontation and crisis.

Let's look at FACTS, most likely this so-called incident is another pathetic US propaganda. In any case, shooting down a prop-driven drone is hardly a difficult task if the Iranians wanted to shoot it down.

Secondly, the SU-25 are sub-sonic ground attack aircraft operated by the Sepah and not the IRIAF. If Iran really wanted to shoot down this slow moving drone it would have scrambled a wide array of interceptors which IRIAF fields.

Also the IRGC Frogfoots have been upgraded to an SM standard and sport R-77 Adder AAM which would have been the appropriate weapon system to engage the Predator UAV.

Even a 1970's vintage F-5E armed with a Iranian made Fattar (AIM-9) is more than enough to bring down a 200 kms/h airspeed UAV flying at a maximum ceiling of 25000 feet. Get a grip on facts guys before posting bursts of hot air. Even if this usual US crap was somehow remotely true, it is some hotshot IRGC pilots fooling around with US inflated ego and getting the best of it. LOL.

if you really want to look at facts, hotshot, you'll probably figure out they the Iranians weren't trying to do anything more than shhot in the general direction of the drone.

had they shot it, then the fact is that the next Iranian pilot who shot at another US drone would be vaporized.

Kindly turn-off the x-box and smell the roses. The US can't even beat Afghan sheep herders let alone "vaporize" anything. Junior, Iran has already downed or hijacked over a dozen US UAV's including the state of the art RQ 170 Sentinel, which has now been cloned by Iran. Get a whiff of reality and turn-off the Fox News. Even Romney regrets believing in the Fox news crappola. LOL.

So what would US do when a drone is about 12 miles off of Long Island or Houston?

It was a warning shot. That's why they deliberately missed hitting this drone. Even the Pentagon officials are coming around to acknowledging it.

8:12 ===you don't avoid a crisis by firing on a plane when it's in international territory, you invite confrontation and crisis.


The Russians shot down Gary Powers’s U2 spy plane in the fifties and it didn’t lead to confrontation and crisis.

Gentlemen please try to inject some adult discussion rather than Fazuli's usual ignorance and attention seeking drivel. Several US spy planes have been shot down by powerful nations like China, Russia, Vietnam, Korea, Iran etc, etc. Even Serbia brought down an F-117 so-called "stealth" fighter. Cuba has downed severval US spy flights since 1959 including mercenary laden anti-Castro transports.

It was just a decade ago that the Chinese PLAF brought down a U.S. Navy EP-3 reconnaissance plane by J-8 fighters in April 2001 near the strategic Hainan island. The Chinese held 24 US service members captive and made the US beg repeatedly and apologize in public. The US is a bully and a coward and only bullies smaller defenceless nations. Iran is no pushover, regardless to what the ranting exiled Iran haters think. Iran has detained several British military personnel for intrusion and released them with gifts after appropriate apologies. Some of you armchair strategists need a constant lesson in real history and military affairs.

Great comment that overwhelms any articles by all those four Blog's authors.

They use photos to seduce a symphaty and use them to gain a fake credibility from uneducated westerners who accidentaly visited their blog.

Anon 8:29 PM UskowionIran has become an entertainment site a joke even , Ever Since the MD arrived !
Don't worry about the westerners ,let us all have fun with our MD night in shining armor!!
Farewell the FACTUAL reporting Manifesto of the blog !