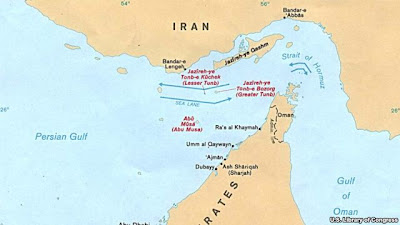 IRGC Navy announced today the creation of IRGCN Fifth Fleet responsible for the security of the Iranian islands in the Persian Gulf. The most important of the islands are Abu Musa and Greater and Lesser Tunb that are controlled by Iran, but claimed by the UAE. The new naval command or “zone” will be based at the port city of Bandar Lengeh on the mainland.

“The Fifth Zone of the Guards' naval force (IRGCN) is one of the naval defense chains which is in particular responsible for the defense of the Iranian islands in the Persian Gulf," said IRGC Commander Maj. Gen. Mohammad Ali Jafari during a ceremony inaugurating the new command. (IRIB, 4 November) 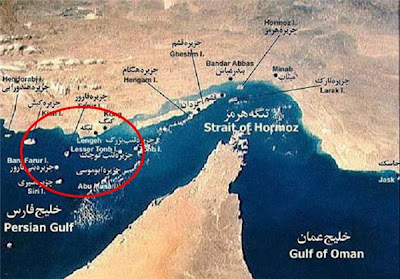 A first glance it looks like, in case of war, the Iran's regular navy, with its larger more vulnerable ships, will be left to fend for itself far from Iran's land based defenses.

The regular army and navy should arrest the regime commanders and join the people in the overthrow of the filthy theocracy.

Iran's sovereignty over Abu Musa and Greater and Lesser Tunb are disputed by UAE but Iran's sovereignty over this territory has not been challenged successfully at the UNSC (as is the case with Israel and the occupied territories) or otherwise. So merely identifying such as "control" is probably not the appropriate term to describe Iran's possession of these islands.

IRGC-N operations have been delegated to PG for some time now. This may simply be a further organizational and/or technical matter.

In case of war, Iran's sovereignty of those islands may no longer exist and a successful challenge of same will have be demonstrated outside the realm of diplomacy.


Might be interesting to see Iran try to re-establish their control of the islands via complaint to the UNSC.
Might be very interesting, possibly amusing.

the small boots far from
base and can better operate than large ships.
I hope you are better doctor than miltary observer

still believing The Shah Officiers and commander are present in the army and will make coup against mullah ?


The IGRC is the iranian version of WAFFEN SS
The WAFFEN-SS was not a rival of wehrmacht, it was Elite Soldiers
where the orinary Army is a place ordinary people means bad trained sodliers
army.

Mark, you need to read the text of this post again; it mentions IRANIAN islands in the Persian Gulf, and identifying the three islands as the most important of those islands. You objection of why we have said these Iranian islands are controlled by Iran is not well founded. Iran has other territories that it does not control at the present time.

So Mr. Uskowi THINKS that the Islands are "controlled" by Iran....and Mr. Pyruz "assisting" him...

What do you both guys think about israel's legitimacy ???

Mr Fazeli has been assiogned to misdiagnose political opinions on this blog.

@anon5:41
I appreciate the adjective "correct"; I've been called worse by the IR cyber basij.
Back to your point, I didn't say that Iran should put their small boat in the Oman sea.

I think that under the circumstances, if war brakes out then it will be a rout, and as such, the IR seems to sacrifice their traditional navy (not controlled by the IRGC) by stationing them in the Oman sea with nothing to do except sit and wait to be decimated by the US navy and its air support.

Even the mighty bismarck was sunk when it ventured too far from its ground and air protection, and it was done under less one sided of a balance of power as the one between the USA & Iran.

Who mentioned anything about the Shah's officers.
I said if any officer in that country that has balls should join the people and overthrow the mullah infested theocracy.
No army can stand in the way of a determined uprising.If the army decides to join the people,the IRGC wont stand a chance.

anon 5:47
if you have balls why don't you join the navy and topple the mullah infested theocracy!
delavaran Mizeh Gerd !!

The reason why the country is stuck in this quicksand is because of traitors and Haramzadehs who do their bidding for Islamic dictatorship.

No one believes that anymore because every decent person knows what happened to those brave officers who had nothing in mind but duty to their beloved country.And for that duty they were barbarically executed in the name of Khomeini's Allah.
One of those officers hair is worth more than all those so called "Generals"of the IRI put together.

be honest, and accept, you write and write nonsense.
The Division Persian Gulf and omas sea make sense,and of course IRI are going to sacrifice own NAVY for nothing is not a usual nonsence, but a nonsense first level

Scummy people like Anon 1:02 AM are paid by the IRI to try to put divisions between Iranians unifying.

This obscure blog mostly expresses the fanatasies of pre-1979 exiled fosssils and recent ignoramuses like Fezeli who has no grasp of reality let alone military affairs. Perhaps, with the exception of Mark Pyruz, the rest of the bloggers are a joke par excellence. The FACT is that Iran is progressing quite well despite all the US/Zionist efforts to undermine its independence.

Actually, a recent review of global scientific achievements puts Iran at par with the Zionist entity, not bad for a nation under embargo for over 33 years and all the ill-wishes of its enemies. I would hope (in vain perhaps)that the owners of this pathetic Debka like blog and their masters would get over the fact that the Islamic Republic has over 90% support and is here is stay. BTW, as Mark correctly pointed out, IRIN and IRGC are just restructuring their force deployment posture to meet any future contingencies in the wider Persian Gulf region and Sea of Oman, both Iranian waters. In professional militaries it is called operational planning and nothing to freak out about.

Get over it guys and present a more realistic picture of Iran.

@anon 12:36
I am not sure if mark would consider your enforcement a plus, nonetheless my Zionist masters demand that I answer your comment,
Do you realize that you are taking pride in being compared to Isreali, which you should not believe it exists?!

This shows your frustration towards the majority of bloggers on Uskowi.
According to your lot Israel doesn't exist,so why you comparing?
Iran's "scientific achievement" amounts to nothing when people haven't got bread to put on their table.
As to your "fossil" claim,I am 25 years old and hence wasn't born before 1979,you loser.
The facts are that losers like you are the minority of fanatics (less than two percent of population)that are holding on at all costs.
Enjoy it while it lasts.

Wow,it looks like you support a bunch of fossils (the primitive clergy) with their barbaric beliefs and nonsense superstitions.

Large Iranian warships's operations in the PG are not necessary, because the Persian Gulf missiles and a land based mobile launchers will do the main job.
Numerous corvettes have launchers with 4 missilles and there will be around 14 of them. Small submarines will hone their possibilities in the PG too.

Large warships, unfortunately exposed for the biggest treat, will provide protection for the large "Kilo" submarines and will be supported by remaining number of corvettes.
This navy's operations, outside the PG, will protect Chabahar and province's area from creation of " a liberated zone" by the aggressors.

Mark is an Uskowi's assistant and they organize all that "discussion".
I have recently red that Mossad's prostitutes can serve an enemy if it serves Mossad's goals