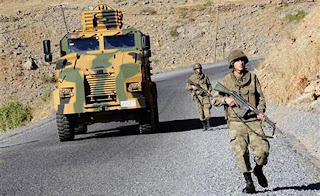 At least 42 militants of Kurdistan Workers’ Party (PKK) were killed on Friday in clashes with the Turkish security forces near the town Semdinli, in Turkish Kurdistan region, near the border with both Iran and Iraq. There has been a surge in fighting in recent months between the PKK and Turkish army.
Photo credit: Al Arabiya, 10 November

Turkey is cooking its own Turkey by supporting the wahabbi-salafi terrorists sponsored by US/NATO in Syria. The simple fact is that Turkey is a very weak and artificial state with over 18 million Alevi-Shia and 20 million Kurds who do want want to part of this moronic Erdogan's suicidal policies that have created enemity with all its neighbours. The Turks are playing with fire as the Kurdish areas of Syria are now joining the PKK insurgency and they have access to heavier weapons looted from Syrian armouries. A Turkish helicopter was shot down killing over 17 soldiers over the weekend with a SAM, probably obtained by the PKK from Libya or Syrian anti-regime terrorists. Turkey will be slowly cooked if the prime imbecile Erdogan continues with his suicidal policies in the service of Zionism.

I beg to differ; Turkey is not a very weak and artificial state. Turkey is one of the most successful states in the Middle East, getting its legitimacy not only from the Ataturk era, but also from centuries of civilization. Just go and visit the country before making such claims. Does Turkey have a Kurdish problem, YES! And they better come to terms with their Kurdish problem if they genuinely want to play a leading role in the Islamic world, as they rightfully deserve. And the solution is much simpler than it meets the eye: recognize the rights of your Kurdish citizens and accept all the atrocities you have committed against them. Let’s not forget, the Kurds have lived in that country long before Ataturk and long before the Ottoman Empire!

Turkey today has problems with all its neighbors from Greece, Armenia, Syria,Russia,Iraq and a lukewarm relations with Iran. Contrary to the erroneous belief that Turkish policies are viable, the reality is that Erdogan is pushing Turkey far from Mustafa Kemal's secularism to a Saudi inspired Wahabbism/Salafism that is manifesting in the NATO terror campaign in Syria.

Turkish AKP Islamists have delusions of reviving the moth ridden Osmani empire. They are bound to fail as Turkey has huge internal problems, not to mention a restless military waiting for its usual coup opportunity. Over 300 mid to senior level officers are in jail for sedition.

Turkey has even a larger number of Shia-Alevis as in Syria, and their influence is quite strong, particularly in the business and military sectors. It is good to have a realistic grasp of regional dimensions than post half-baked wishful thinking. As mentioned by the grown-ups before, neither President Assad nor Iran are in any real danger. The regional demographic facts are against the Persian Gulf puppets, Saudi stooges and the moronic policies of Turkey. Iran and Iraq alone have over 100 million Shias who simply will not sit by and be slaughtered by the US and NATO-Salafi/Zionist axis. Not to mention the regional dymanics in Lebanon, Bahrain, the wider Persian Gulf and the unraveling situation in Egypt/Gaza-Palestine, and compounded by the rapid demise and ill-health of fossil monarchs in the corrupt Al-Saud clan. The region's long-term outcome will certainly not favor the US or its spoilt war-lusting Zionist pup as the Salafi terrorists will eventually turn their guns at the Zionist entity strive for the liberation of Palestine. All shades of the 1980's Afghan jihad against the Russians which created these Wahabbi-Salafi murdering Jihadis anyway, but this time the payback will be in spades and last for generations. REALITY BITES..eh

thank you for the laughs.

it takes a special sort of a dirty and dishonest donkey to bray that Turkey is in the service of Zionism.

O'm learning to be amused by the angry little donkeys stamping their enfecalated hooves and calling everyone else Zionist agents.

and not having to be physically in your presence allows me to laugh without having to inhale that noisome odor that you exude.

go get your bag of official Ayatollah oats.

you've earned it at the expense of your honor.